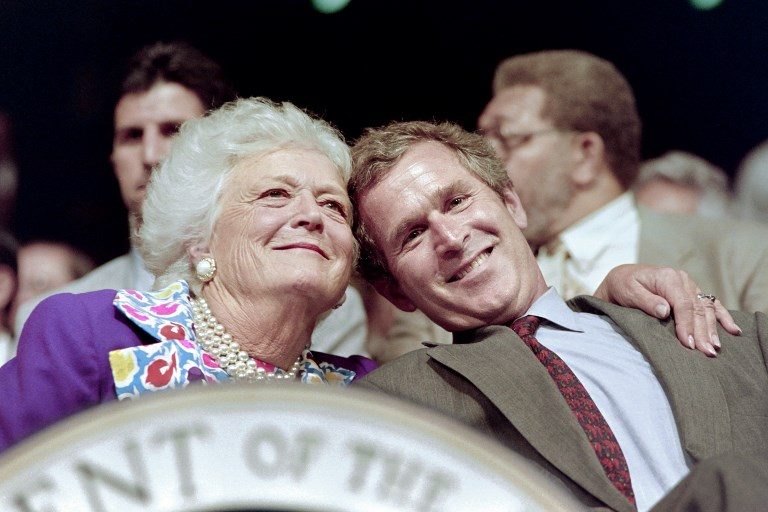 Facebook Twitter Copy URL
Copied
Mrs Bush, after consulting with relatives and doctors, decides to 'focus on comfort care' at the family home in Houston

WASHINGTON, DC, USA – Former US first lady Barbara Bush is in “failing health” after a series of hospitalizations and “has decided not to seek additional medical treatment,” her husband’s office said in a statement Sunday.

It said that Mrs Bush, after consulting with relatives and doctors, had decided to “focus on comfort care” at the family home in Houston.

“She is surrounded by a family she adores, and appreciates the many kind messages and especially the prayers she is receiving,” said the brief statement from the office of former president George H.W. Bush.

The statement provided no details on her condition, but Mrs Bush had been hospitalized for bronchitis treatment in January 2017. She had heart surgery in 2009, and was operated on for an ulcer the year before. She had been treated in the past for the thyroid ailment known as Graves’ disease.

“The President’s and First Lady’s prayers are with all of the Bush Family during this time,” said White House Press Secretary Sarah Sanders.

Barbara Bush has long been considered the rock at the center of one of America’s most prominent political families, as the wife of a president, the mother of another, George W. Bush, and the mother also of a former Florida governor and onetime presidential aspirant, Jeb Bush.

She first met her husband-to-be at the age of 16; she was a schoolgirl and he was a student at an elite preparatory school in Massachusetts.  They married in 1945 while he was on leave from wartime service as a naval officer. The couple had six children.

As first lady, from 1989 to 1993, she embraced the cause of universal literacy, and founded a foundation for family literacy.

She gained a reputation for toughness, wry humor and straight-speaking. Asked in 2010 about former Alaska Governor Sarah Palin – who sought the vice presidency in 2008 – Mrs. Bush told an interviewer, “I sat next to her once, thought she was beautiful, and I think she’s very happy in Alaska, and I hope she’ll stay there.” – Rappler.com