Apr 21, 2018 3:34 PM PHT
Agence France-Presse
Facebook Twitter Copy URL
Copied
The agreement is the latest in a string of deals that have seen opposition fighters and civilians bussed out of former opposition strongholds near Damascus 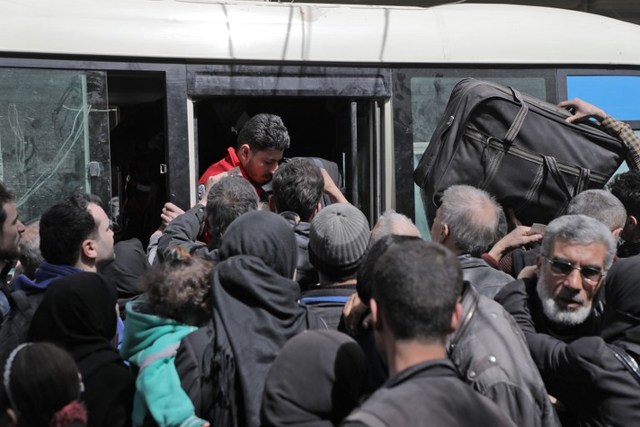 DAMASCUS, Syria –  Rebels were expected to leave a new area outside the Syrian capital Saturday, April 21, state media said, after a new deal was reached between opposition fighters and the Russia-backed regime.

The agreement is the latest in a string of deals that have seen opposition fighters and civilians bussed out of former opposition strongholds near Damascus.

“An agreement has been reached in the area of Eastern Qalamun providing for terrorists to exit Al-Ruhayba, Jayrud and Al-Nasiriya starting from” Saturday, state news agency SANA said late Friday, April 20 using its usual term for rebels.

The town of Al-Ruhayba lies some 60 kilometers (35 miles) northeast of Damascus.

Under the deal, fighters would hand over heavy and medium-size weapons as well as ammunition depositories, before heading to northern Syria, SANA said.

They would be transferred to the rebel-held northern town of Jarabulus in Aleppo province and to the neighboring province of Idlib, which is the last in Syria to remain largely outside regime control.

The Syrian Observatory for Human Rights, a Britain-based war monitor relying on sources inside Syria, said buses had entered the East Qalamun area after the deal was reached between the rebels and the Russia-backed regime.

The regime is pushing to secure the capital after it announced its full reconquest last week of what was the last major rebel bastion outside Damascus. (READ: First rebels leave Syria enclave under Russian-brokered deal)

Eastern Ghouta was emptied of rebels after a nearly two-month deadly assault on the enclave and several Russia-brokered deals that saw tens of thousands of people transported on buses to Syria’s north.

Earlier this week, a deal was inked that saw around 5,000 people including 1,500 fighters exit Dumayr, a town just to the south of Al-Ruhayba.

After retaking Eastern Ghouta, the regime has also turned its sights on the southern districts of the capital where the Islamic State jihadist group has a presence.

Regime forces have bombarded the Yarmuk Palestinian refugee camp on the southern edge of Damascus in recent days in a bid to dislodge IS fighters.

Syria’s conflict has killed 350,000 people and displaced millions more since it broke out in 2011 with the brutal repression of anti-government protests.– Rappler.com