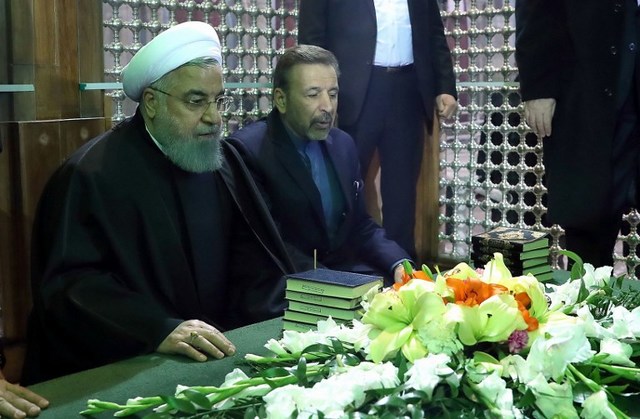 TEHRAN, Iran – Iran’s President Hassan Rouhani on Saturday, April 21 appeared to criticize the morality police after a video emerged of a violent encounter with a woman accused of breaching the country’s strict dress code.

“Some say the way to promote virtue and prohibit vice is… by going to the street and grabbing people by the neck,” said Rouhani in a wide-ranging speech to government officials carried on state television.

“Promoting virtue will not work through violence,” he added.

On Friday, April 20, mobile footage went viral on Iranian social media showing a female member of the morality police violently beating a woman whose headscarf was not sufficiently covering her hair.

The video prompted outrage on social media and the interior ministry vowed an investigation, but also implied the woman may have provoked the violence by swearing at the police.

Rouhani did not refer directly to the case, but appeared to use it to criticize recent efforts to clamp down on social media networks.

“Mobiles are the way to promote virtue and prohibit vice. I don’t know why some people don’t like mobile phones or social networks,” he said.

“They don’t like people having information. They think if people are in total ignorance, they can sleep better at night.

There is mounting pressure to block foreign social media networks such as Telegram, which are the only way to spread information critical of Iran’s Islamic system.

But Rouhani said uncensored networks were vital to the economy, and warned that the Islamic revolution of 1979 would ultimately be judged by the regime’s behavior towards its people.

“If our behavior has gotten worse (since 1979), then this revolution is on the wrong path. The fundamental purpose of the revolution is to respect people and solve their problems,” he said.

The morality police have been far less visible in cities since Rouhani came to power in 2013, and Tehran’s police chief claimed in December that a softer line was being taken on breaches of Islamic code such as clothing rules, with an emphasis on “education” rather than detention.

But thousands of cases are still brought against women for breaching clothing rules, and a former police chief, General Hossein Sajedinia, said in April 2016 that 7,000 undercover morality police were operating in the capital.– Rappler.com