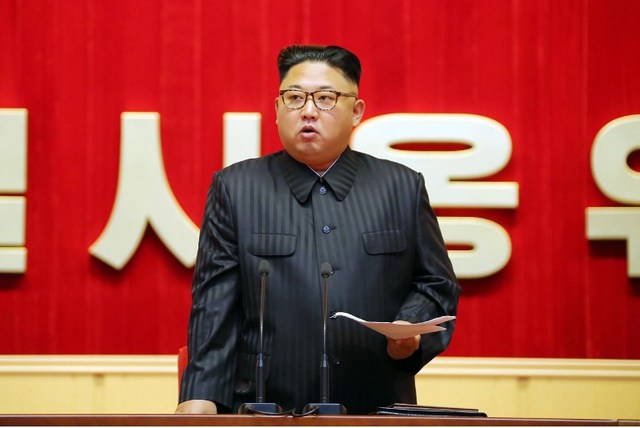 SEOUL, South Korea – North Korean leader Kim Jong Un’s promise to build “socialist economic construction” in his nuclear-armed but impoverished and isolated country could herald more Chinese-style economic reforms, according to analysts – but he will never explicitly say so.

Alongside the declaration Saturday,  April 21, that the North had completed the development of its nuclear arsenal and no more atomic or missile tests were needed, Kim proclaimed that the “new strategic line” for the ruling Workers’ Party would be “socialist economic construction”.

The 3 words appeared a total of 56 times in the report by the official KCNA news agency on Kim’s speech and the subsequent party decision.

It has a long way to go.

For a time after the Korean War the North was wealthier than the South, benefitting from a Japanese colonial decision to concentrate industrialisation there as it had more mineral resources and more hydroelectric power potential than the largely agricultural southern end of the peninsula.

But that situation reversed as the North – long considered one of the most state-controlled economies in the world – suffered from decades of economic mismanagement, worsened when the demise of the Soviet Union ended the financial support that had helped to plug the gaps.

Average incomes were less than one-twentieth of those in the South in 2016, according to the most recent statistics available from Seoul – Pyongyang itself does not publish figures even for GDP growth.

The situation has been improving as Pyongyang quietly allows the market to play a greater role in its economy under Kim.

It recorded its fastest expansion in 17 years in 2016, according to the Bank of Korea, the South’s central bank – although that is threatened by recent UN Security Council sanctions imposed on sectors such as coal, fish and textiles over its weapons programs.

Kim intends to pursue “essentially the Chinese-style economic program he is busily implementing”, said Andrei Lankov of Korea Risk Group. “Economic reforms which are not going to be called economic reforms.”

In neighboring China and nearby Vietnam, Kim has two examples of Communist parties that have embraced capitalism without threatening the rule of the one-party state – even reinforcing their positions by delivering increasing prosperity.

Deng Xiaoping’s “Reform and Opening” in the 1980s started a decades-long economic boom that propelled China from a lumbering backwater to the world’s second-largest economy and a crucial driver of global growth.

Beijing calls it “Socialism with Chinese characteristics”, and officials have long pressed Pyongyang to follow its example.

In public, Kim is having none of it. At the Workers’ Party congress in 2016 – the first such meeting for 36 years – he pointedly decried “the filthy wind of bourgeois liberty and ‘reform’ and ‘openness’ blowing in our neighbourhood”.

But in practice he has brought in changes.

Under what Pyongyang calls the Socialist Corporate Responsible Management System, factory managers have told Agence France-Presse that once they have satisfied the quotas allocated to them by the state, they are free to buy and sell from suppliers and to customers of their choice, at prices negotiated between them.

State-owned enterprises (SOEs) can set up subsidiaries in other areas of business – the national airline Air Koryo has diversified into fields such as taxis and soft drinks.

That also effectively allows independent entrepreneurs to set up operations under SOEs’ wings, to seek a level of protection in a system that remains murky and subject to arbitrary change.

Agriculture, too, has also been reformed, with members of co-operative farms cultivating plots of their own of almost 100 square metres, growing produce that is sold in the informal, technically illegal “jangmadang” markets to be found in every North Korean town.

Even so the North cannot produce enough food to adequately feed its people – there is an annual shortfall of around one million metric tonnes, according to experts, with more than 40 percent of the population undernourished – and there is no enough electricity to light its cities.

Lankov predicted more investment in infrastructure, industrial reforms including more autonomy for SOEs and greater rights for managers to retain profits, along with further agricultural development, “essentially privatisation of the land”.

Kim “hopes that he will achieve sustainable economic growth, improving living standards,” he told Agence France-Presse. “They don’t care about lifestyles, they just care about the amount of calories.”

On his trip to China last month – his first overseas journey since inheriting power from his father in 2011 – Kim visited an exhibition in the Beijing tech hub of Zhongguancun showcasing recent innovations by the Chinese Academy of Sciences.

“We can grasp the mightiness of China,” he wrote in the visitors’ book, according to KCNA, and he told the Workers Party that the North needed to boost science and education to build “a scientific and technical power and a talent power”.

Chinese tech firms Alibaba and Tencent are among the biggest companies in the world, and Koh Yu-hwan, professor of North Korean Studies at Dongguk University, said Pyongyang wanted to “quickly adopt the fourth industrial revolution” – the transformation wrought by digital technology – “so its economy can take a leap”.

But the North remains a closely-controlled society, and one where the authorities cannot declare an about-turn in economic policy.

Kim is pro-business, Lankov said. “Unlike his father or his grandfather he has no sentimental attachment nor ideological commitment to the socialist model.”

But while Khrushchev denounced Stalin and Deng criticized Mao, Kim could not do the same with his legitimacy resting in large part on his family heritage.

“You cannot change much in the ideology because you cannot say that your father or grandfather was wrong.” – Rappler.com