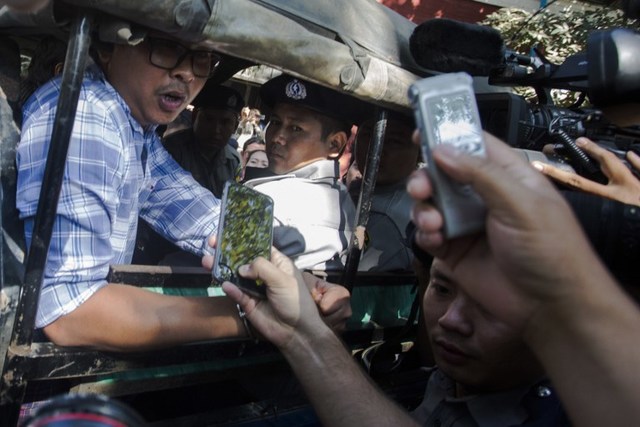 YANGON, Myanmar – The family of a Myanmar policeman who testified in court that two Reuters reporters had been set up was evicted from their police housing, his wife said.

Deputy police Major Moe Yan Naing, a prosecution witness, surprised the Yangon courtroom on Friday, April 20, by describing how his colleagues were ordered by a senior officer to “get” reporter Wa Lone by handing him sensitive documents at a meeting.

The 32-year-old Myanmar journalist and his colleague Kyaw Soe Oo, 28, have been detained since they were arrested in December and accused of possessing classified papers.

The case, which has sparked global alarm over eroding press freedom in Myanmar, could see the pair jailed for up to 14 years.

Moe Yan Naing’s testimony was an extremely rare case of a security official breaking ranks in the former junta-run country, where the army remains immensely powerful.

The defense team quickly expressed fears for the safety of the policeman, who was returned to detention after the pre-trial hearing.

He has also been held by authorities since December and is facing charges for breaching police regulations.

The day after his testimony Moe Yan Naing’s wife, Tu Tu, posted on Facebook that “a senior officer asked us to leave our barrack” in the capital Naypyidaw.

“I feel like I was hit by a thunderstorm. We were kicked out to the roadside,” she wrote, alongside photos of the family’s belongings piled up outside.

When reached by phone on Sunday she told Agence France-Presse briefly that she was travelling back to her home town in the central region of Sagaing.

A police spokesman denied the eviction had any connection to her husband’s testimony, saying the family had been supposed to leave the capital months ago after Moe Yan Naing was transferred to Yangon.

“It’s not related with his statement at court… it was just a coincidence,” Colonel Myo Thu Soe told Agence France-Presse.

Officials have sought to curtail reporting on a military crackdown in Rakhine state which the UN says amounts to ethnic cleansing of the Muslim Rohingya minority.

At the time of their arrests the reporters had been investigating security officers’ roles in the massacre of 10 Rohingya men in northern Rakhine, centre of the army campaign that has seen some 700,000 Rohingya flee to neighboring Bangladesh since August.

The military later conceded that security officers took part in the killings, which rights groups say is the tip of the iceberg when it comes to atrocities against the Rohingya.

The stateless group has faced decades of systematic discrimination and persecution in mainly Buddhist Myanmar. – Rappler.com