Apr 22, 2018 8:04 PM PHT
Agence France-Presse
Facebook Twitter Copy URL
Copied
'I express my solidarity with the country, and I join bishops in asking that the violence end, pointless spilling of blood is avoided and the underlying issues be resolved peacefully and with a sense of responsibility,' Pope Francis says 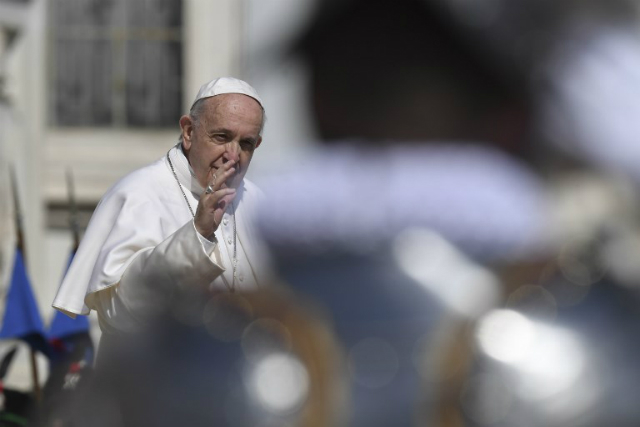 VATICAN CITY – Pope Francis on Sunday,  April 22, called for an end to the violence which has engulfed Nicaragua following anti-government protests that have seen 11 killed, including a journalist.

The protests erupted in Nicaragua on Wednesday, April 18, over a proposed pension reform, with violent demonstrations rocking cities across the Central American country.

Francis called for a peaceful resolution to the dispute.

“I’m worried about what’s been happening in the last few days in Nicaragua, where after a social protest there were battles that have caused deaths,” the pontiff said during the Regina Coeli service at St Peter’s Square on Sunday.

“I express my solidarity with the country, and I join bishops in asking that the violence end, pointless spilling of blood is avoided and the underlying issues be resolved peacefully and with a sense of responsibility.”

Nicaraguans have taken to the streets over a proposed change to the pension system that would see workers and employers pay more toward the retirement system.

The reform designed by Daniel Ortega’s government is aimed at settling a $76 million deficit faced by the country’s social security institute.

In a bid to calm the protests – the biggest of his 11-year presidency – Ortega agreed Saturday, April 21, to speak with the private sector about social security reforms, only to be rebuffed by Nicaragua’s top private-sector business union.

They said there could be no dialogue unless the government “immediately ceases police repression.”

On Saturday local media reported that journalist Miguel Angel Gahona was shot dead by a suspected sniper in the city of Bluefields, on Nicaragua’s Caribbean coast.

Journalists have reportedly faced attacks, been temporarily detained and had their work equipment stolen since the start of the protests. Meanwhile, four independent television outlets were taken off air on Thursday, although only one currently remains closed. – Rappler.com