WATCH: What will happen to the DMZ after the inter-Korea summit?

Watch her report above. 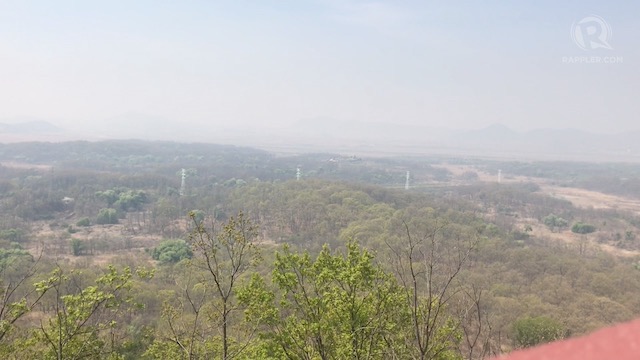 NATASHYA GUTIERREZ, REPORTING: I’m standing here just two kilometers from the North Korean border. Even from here we can hear the propaganda song.

This is the Demilitarized Zone, better known as the DMZ. The DMZ was created in 1953 to end the 3-year Korean war. It was established as a buffer zone in an armistice signed by North Korea, China, and the United Nations to signal a temporary cessation of fighting, and has since become a de facto border between North and South Korea. Because no peace treaty has ever been signed, the two sides are technically still at war.

Here in the DMZ is also where the meeting between South Korea President Moon Jae-in and North Korean leader Kim Jong-Un is scheduled to take place.

A major point of negotiation in the summit is this DMZ, one of the most enduring signs of the conflict. The 4-km wide stretch of land is ironically, highly militarized. Soldiers of both Koreas patrol each side of the DMZ, and both sides have artillery ready in case of conflict.

Both leaders are expected to decide what to do with DMZ when they meet. Hopes are high that it will be returned to its “original state,” wherein troops, artillery, and military weapons would be pulled back.

This meeting is historic because it is the first time a summit between the two nations will be held in the DMZ and not in Pyongyang. If the talks are successful, it would have been 65 years since the DMZ was created.

Aside from discussing the demilitarized zone, the talks aim to see North Korea agree to denuclearization – all with the goal to finally find peace between the two nations.

With the summit just one week away, North Korean leader Kim Jong-Un has said he will suspend his country’s nuclear testing program, saying there is no longer a need for these tests.