Apr 24, 2018 9:42 PM PHT
Agence France-Presse
Facebook Twitter Copy URL
Copied
This is first statue of a woman in London's Parliament Square and coincides with the celebration of the 100th anniversary of women winning the right to vote in Britain 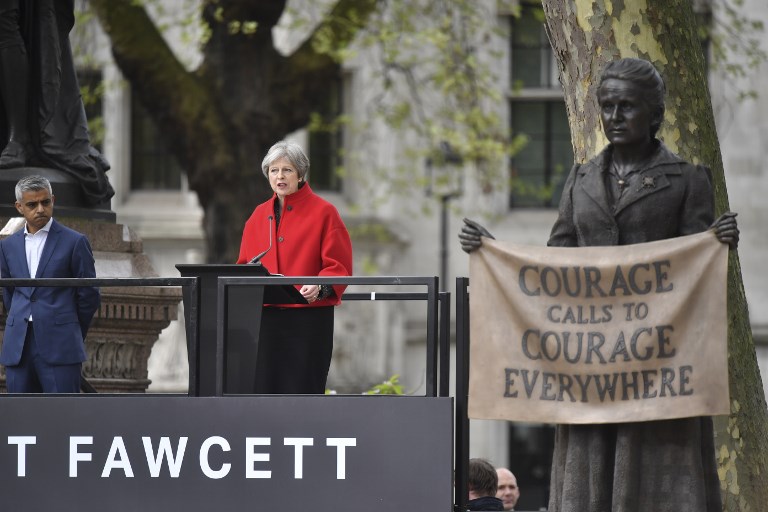 LONDON, United Kingdom – The first statue of a woman in London’s Parliament Square was unveiled on Tuesday, April 24 to celebrate the 100th anniversary of women winning the right to vote in Britain.

Were it not for Fawcett, “I would not be here today as prime minister, no female MPs would have taken their seats in parliament, none of us would have the rights we now enjoy,” May said.

“The struggle to achieve votes for women was long and arduous,” and Fawcett “devoted her life to the cause”.

May said Fawcett faced decades of fierce opposition as she campaigned on women’s rights throughout Britain and the wider world.

“It is right and proper that, today, she takes her place at the heart of our democracy,” May said, whilst warning that the fight for equality was “far from won”.

The statue marks February’s centenary of the Representation of the People Act, which extended the vote to around eight million women aged over 30.

It was not until 1928 that British women gained the same voting rights as men, but the 1918 act was a major step that put the kingdom ahead of some contemporaries such as France.

The campaign for a statue of a woman opposite the British parliament started with an online petition two years ago by feminist campaigner Caroline Criado Perez.

The statue was created by British artist Gillian Wearing, who won the 1997 Turner Prize for visual arts. She is the first woman to produce a statue for Parliament Square.

The monument shows Fawcett holding a placard reading “Courage Calls To Courage Everywhere,” in tribute to a speech she gave upon the death of Suffragette Emily Wilding Davidson at the 1913 Epsom Derby horse race.

Fawcett herself was a Suffragist, part of a moderate movement that predated the more militant Suffragettes.

She is best known for her campaigns to improve women’s opportunities in higher education and was a co-founder of the women-only Newnham College at Cambridge University.

She was also president of the National Union of Women’s Suffrage Societies between 1897 and 1901.