Apr 25, 2018 9:06 AM PHT
Agence France-Presse
Facebook Twitter Copy URL
Copied
'I want you to feel totally free to take whatever decision you need because 2018 is an important year for the PT, for the left and for democracy,' writes Luiz Inacio Lula da Silva in a letter to the Workers' Party 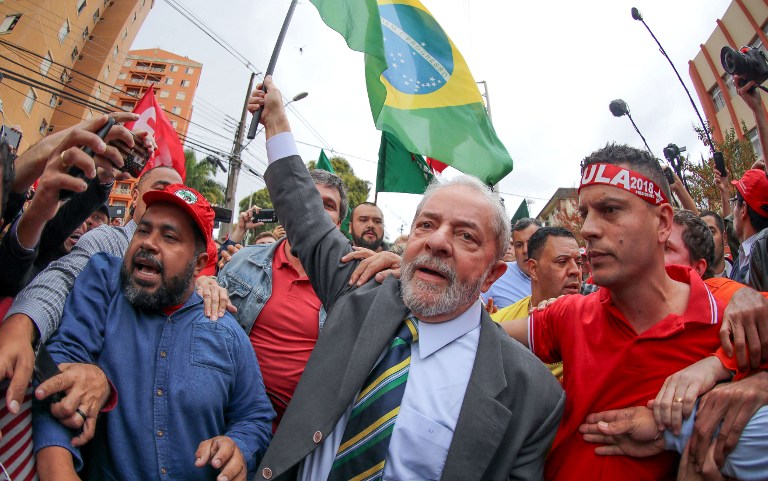 RIO DE JANEIRO, Brazil – Brazil’s ex-president Lula, who is imprisoned for corruption, on Tuesday, April 24, gave his Workers’ Party (PT) the green light to find a new candidate for the October presidential election in which he remains the frontrunner.

“I want you to feel totally free to take whatever decision you need because 2018 is an important year for the PT, for the left and for democracy,” wrote Luiz Inacio Lula da Silva in a letter to the party leadership.

But the PT dismissed his offer, with party president Gleisi Hoffmann writing on Facebook that they would keep him as their candidate.

“The people want Lula freed, that Lula be president! There is no plan B because Lula is innocent,” she wrote, saying his candidacy would be formally approved at a national convention later this year.

The party has said it will exhaust all legal avenues in the hope that he can run in an election that he is the favorite to win.

Ahead of the vote, the PT has stepped up displays of unconditional support for its co-founder who was jailed for 12 years on April 7, moving its headquarters to the southern city of Curitiba where he is serving his sentence.

But experts say it is highly unlikely he will be allowed to run and the party has no other leaders with his charisma or experience to replace him, with polls predicting it will struggle to pass the 2% mark.

One possible substitute is ex-Sao Paulo mayor Fernando Haddad, while another is former minister Jaques Wagner – but the former is unlikely to win unanimous support and the latter is plagued by suspicions of corruption.

In his letter, Lula said he was “happy” about the latest Datafolha research, which showed that despite his incarceration, he would still receive 31% of the vote – although that was 6 percentage points lower than the previous poll.

The former head of state was convicted for accepting a seaside apartment as a bribe from a huge construction company linked to the state-controlled oil major Petrobras.

He claims he has been framed to prevent him from running in October’s election.

The deadline for registering as a candidate is August 15.

Under Brazil’s clean slate law, his conviction means he would be barred from running, but the Superior Electoral Tribunal will make a definitive ruling by September 17. – Rappler.com