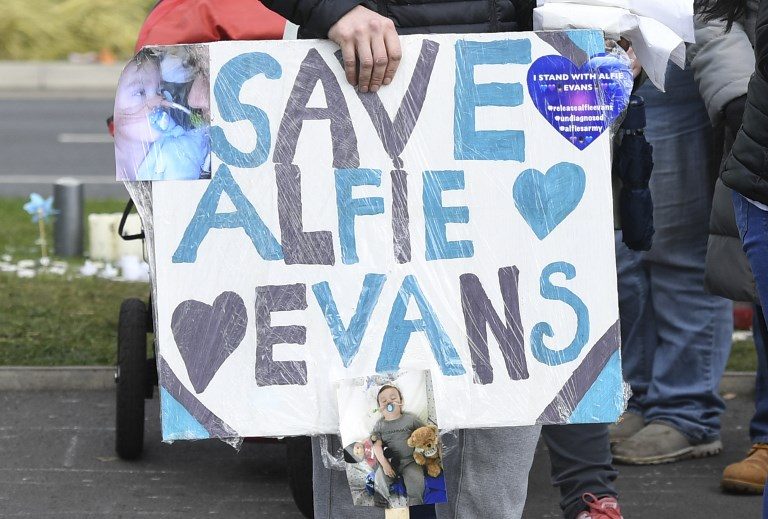 Facebook Twitter Copy URL
Copied
Doctors have removed the ventilator support of British boy Alfie Evans, who suffers from a rare neurological disease, but he has continued breathing independently for more than a day

LONDON, United Kingdom – The parents of terminally ill British boy Alfie Evans were to appeal Wednesday, April 25 a decision preventing them from going to Rome for treatment following high-profile interventions in the case from Pope Francis and the Italian government.

Toddler Evans, who suffers from a rare neurological disease, had his ventilator support removed late on Monday, April 23 but has continued breathing independently for more than a day.

A judge ruled on Tuesday, April 24 that the 23-month-old could be taken home from Alder Hey Children’s Hospital in Liverpool, northwest England, but could not be taken to Rome for further treatment.

“The court of appeal have reached out to us and said they are going to set back 3 judges to hear the case,” Tom Evans told reporters outside the hospital on Tuesday.

“In reality, he could be in Italy right now. I’m not giving up because Alfie’s breathing away, he’s not suffering.”

The father said that he occasionally needed to give his son mouth-to-mouth “because his lips went blue and he was really fighting”.

‘Want him to die naturally’

Pope Francis has intervened in the case that has attracted worldwide attention, writing on Twitter that he hoped the parents’ “desire to seek new forms of treatment may be granted”.

Italy has previously said it was granting citizenship to the toddler and an Italian defense ministry medical evacuation plane is on standby to fly Evans to Italy.

The judge said the best they could hope for was to explore the options of removing the boy from intensive care either to a ward, a hospice or his home.

Andrea Williams, chief executive of Christian Legal Centre, said that the parents were not being “unrealistic about his medical situation.”

“The parents accept that the is profoundly unwell and that he may well die,” she told AFP. “They just don’t want everything to be stopped. They want him to be fed and treated and to die naturally.”

Hayden on Monday rejected another appeal for a delay in order to give the parents time to present a new challenge.

British law states that parents “cannot demand a particular treatment to be continued where the burdens of the treatment clearly outweigh the benefits for the child”.

If agreement cannot be reached between the parents and the healthcare professionals, “a court should be asked to make a declaration about whether the provision of life-sustaining treatment would benefit the child”.

The case is the latest in a series of high-profile battles between parents of ill children and the British authorities.

The most recent example was that of Charlie Gard, who was born in August 2016 with a rare form of mitochondrial disease.

Gard’s parents fought a 5-month legal battle for him to be taken to the United States for experimental treatment.

The parents of Ashya King also defied professionals in 2014 when they snatched their cancer-stricken son from a British hospital and took him to Prague for proton beam therapy.

King, now eight years old, has since been declared clear of the disease.

The Bambino Gesu (Baby Jesus) paediatric hospital in Rome, which is administered by the Vatican, has said a specially-equipped plane is on standby to fly to Britain to pick up Evans if he is released.

Tom Evans met the pope in the Vatican last Wednesday after several statements of support made by the pontiff.

At an audience last week, he told attendees in reference to the case: “I want to reiterate and strongly confirm that the only master of life, from the beginning to its natural end, is God, and our duty is to do everything to protect life.”

Hundreds of people have protested outside the Liverpool hospital in support of the father’s plea for the boy to be discharged. – Rappler.com