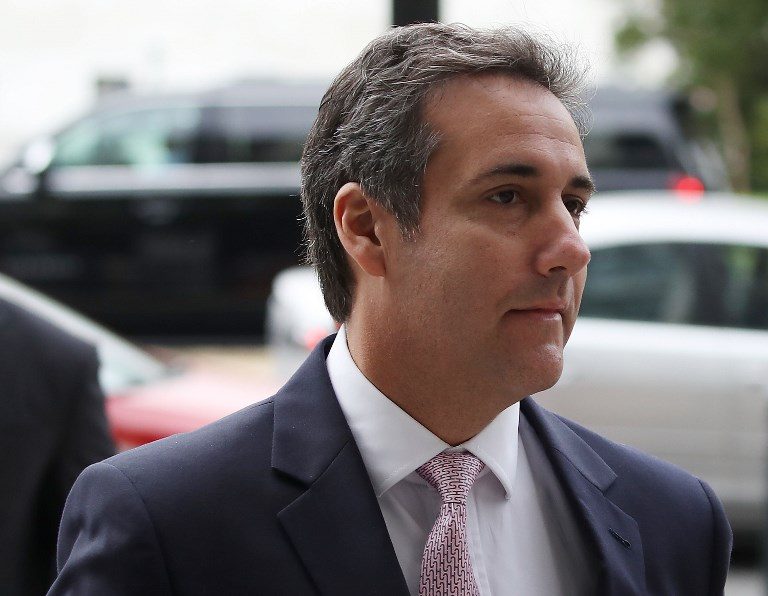 Trump had previously denied knowledge of a $130,000 payment Cohen made to Daniels, which she claims was to prevent her from talking about her alleged 2006 affair with the property mogul-turned-president.

Trump, in a wide-ranging telephone interview with “Fox and Friends,” admitted for the first time that Cohen represented him in negotiations with Daniels, who has filed a lawsuit seeking to have the “hush agreement” drawn up by Cohen thrown out.

Trump said Cohen represented him on only a “tiny, tiny little fraction” of his “overall legal work.”

“He represents me – like with this crazy Stormy Daniels deal, he represented me,” Trump said.

“And, you know, from what I see, he did absolutely nothing wrong,” Trump said. “There were no campaign funds going into this.”

Asked by reporters on Air Force One earlier this month about the payment to Daniels, Trump had said he was not aware of it.

The payment to Daniels was made just days before the November 2016 presidential election, and there have been suggestions it may have been a violation of campaign finance laws.

‘Michael is a good person’

Cohen’s New York home and office were raided by the FBI this month as part of an unspecified criminal investigation, and Trump sought in the “Fox and Friends” interview to distance himself from his longtime personal attorney.

“Michael is a good person,” Trump said. “He’s really a businessman, fairly big business as I understand it.

Trump was also asked about Cohen’s decision to invoke the Fifth Amendment – the constitutional right to remain silent to avoid self-incrimination – in a case brought by Daniels in Los Angeles over the hush agreement.

In the Daniels case, Cohen is asking to delay proceedings for 90 days, arguing that any statements he might make could affect the criminal investigation into his business dealings in New York.

In New York, a federal judge meanwhile appointed a retired judge to review documents, cell phones and other material seized during the FBI raid on Cohen’s home and offices.

Citing attorney-client privilege, lawyers for Trump had asked to be allowed to examine the documents before they are handed over to prosecutors.

Cohen’s lawyers had made essentially the same request, while prosecutors were arguing for unfettered access to the material.

Prosecutors sought to use Trump’s claim in the “Fox and Friends” interview that Cohen did little legal work for him to bolster their argument that most of the seized material was not subject to privilege.

US District Judge Kimba Wood went for a compromise of sorts, naming a retired judge, Barbara Jones, to be “special master” who will sort through the material and decide what is privileged. – Rappler.com