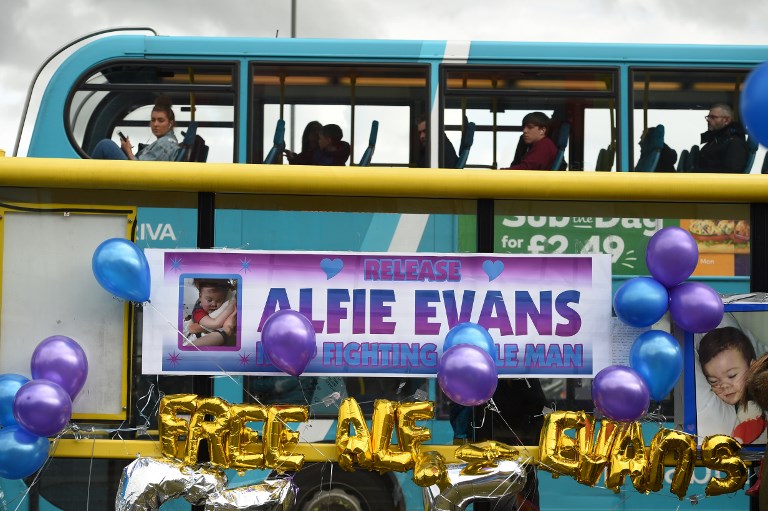 “Our baby grew his wings tonight at 2:30 am (0130 GMT or 9:30 am Philippine time). We are heartbroken. Thank you everyone for all your support,” the mother, Kate James, wrote on Facebook.

His father, Thomas Evans, said: “My gladiator lay down his shield and gained his wings at 0230. Absolutely heartbroken. I LOVE YOU MY GUY”.

The parents had fought to take their son, who had a degenerative neurological condition, out of a hospital in Liverpool in northwest England to a clinic in Rome but lost a final court appeal on Wednesday.

Doctors had already removed life support on Monday after the parents lost a previous appeal to keep him alive despite doctors’ recommendations.

Alder Hey Children’s hospital, where the 23-month-old was being treated, expressed their condolences.

“All of us feel deeply for Alfie, Kate, Tom and his whole family and our thoughts are with them.

“This has been a devastating journey for them and we would ask that their privacy and the privacy of staff at Alder Hey is respected,” the hospital said.

Pope Francis had intervened several times in a case that touched hearts around the world and prompted vigils in Italy and Poland.

Earlier this week the pontiff wrote on Twitter that he hoped the parents’ “desire to seek new forms of treatment may be granted”.

Thomas Evans had also met the pope in the Vatican last week and asked him to “save our son”.

Italy granted citizenship to the toddler on Monday in the hope of facilitating his transfer to the Bambino Gesu (Baby Jesus) paediatric hospital in Rome.

After losing his legal battle, the father on Thursday had asked supporters, who have staged a series of angry vigils outside the hospital where the baby was being treated, to go home.

He said he was grateful for all the support but asked people “to return back to your everyday lives and allow myself, Kate and Alder Hey to form a relationship, build a bridge and walk across it”.

“We also wish to thank Alder Hey staff at every level for their dignity and professionalism during what must be an incredibly difficult time for them too,” he added.

Medical staff have been subjected to severe online abuse and police officers had to be deployed on Monday after some protesters tried to gain entry.

The case is the latest in a series of high-profile battles between parents of ill children and the British authorities.

British law states that parents “cannot demand a particular treatment to be continued where the burdens of the treatment clearly outweigh the benefits for the child”.

If agreement cannot be reached between the parents and the healthcare professionals, “a court should be asked to make a declaration about whether the provision of life-sustaining treatment would benefit the child”.

The most recent example was that of Charlie Gard, who was born in August 2016 with a rare form of mitochondrial disease.

Gard’s parents fought a 5-month legal battle for him to be taken to the United States for experimental treatment.

The parents of Ashya King defied professionals in 2014 when they snatched their cancer-stricken son from a British hospital and took him to Prague for proton beam therapy.

King, now 8 years old, has since been declared clear of the disease. – Rappler.com