Apr 29, 2018 7:37 PM PHT
Agence France-Presse
Facebook Twitter Copy URL
Copied
The controversy has touched on long-running frustration over special treatment granted to Thai officials and elites – often at the expense of the public and the environment 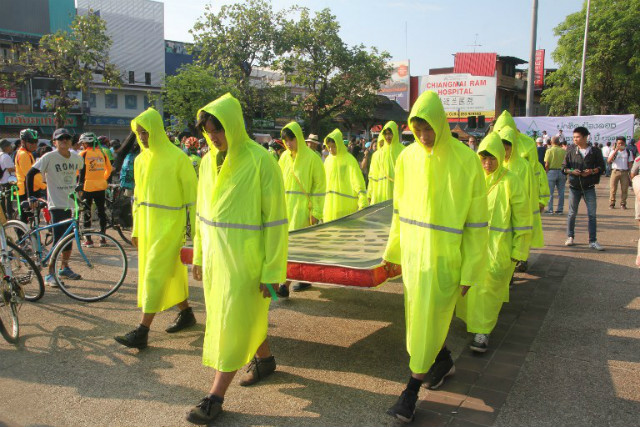 BANGKOK, Thailand – Around 1,000 people rallied in the northern Thai city of Chiang Mai on Sunday, April 29, to protest the construction of homes for officials on forested land flanking a revered mountain, in one of the largest shows of dissent under junta rule.

Public frustration has been mounting over the project since aerial images of several dozen officials’ homes – carved into the green foothills of Chiang Mai’s Doi Suthep mountain – started circulating on social media earlier this year.

On Sunday, a sea protesters, many wearing green and waving flags, called for the demolition of the buildings as they marched through Chiang Mai, the biggest city in Thailand’s mountainous north.

“About 1,000 people gathered… since 7:30 am (0030 GMT) to protest against the houses,” Chiang Mai police officer Jirasak Sriprasert told Agence France-Presse, adding that the demonstration was peaceful.

Protesters say the mountain, which looms over Chiang Mai and hosts a hugely popular temple believed to hold a relic of the Buddha, is a sacred site and conservation area.

But officials have defended the state housing project for judges and other court staff, saying it was carried out legally on a patch of government-owned land adjacent to the national park that covers the rest of the mountain.

The controversy has touched on long-running frustration over special treatment granted to Thai officials and elites – often at the expense of the public and the environment.

“We want the demolition of the houses and a return of the forest,” the rally’s organisers said in a statement on Sunday.

The march went ahead in defiance of a ban on political gatherings and protests imposed by the junta that seized power in 2014.

The regime, which says it is preparing a return to democracy next year, has faced a spate of demonstrations in months as impatience mounts over military repression and impunity for the wealthy and well-connected. – Rappler.com