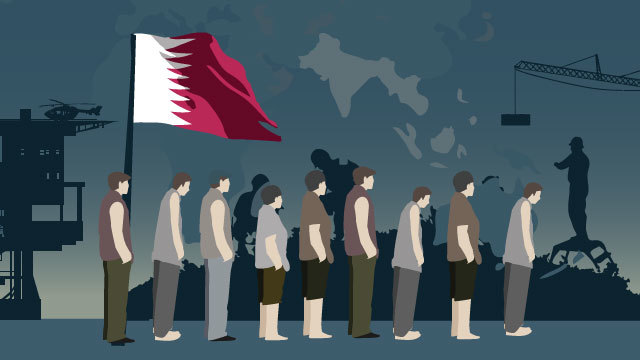 DOHA, Qatar (UPDATED) – Qatar could agree a deal within a fortnight to abolish its controversial exit visa system, which requires workers to obtain their employers’ permission to leave the country, labor experts said Sunday, April 29.

The possibility of a landmark deal came as the International Labor Organization (ILO) opened an office in Doha, part of an agreement under which the United Nations agency will oversee wholesale labor reform by the 2022 World Cup host. (READ: Migrant life in Qatar)

“We are looking now about the final details of the exit visa, we expect a deal within the next two weeks,” said Sharan Burrow, general secretary of the International Trade Union Confederation and a once-vocal critic of Qatar’s labor laws.

Other sources with knowledge of negotiations on the issue confirmed a deal was expected to be announced soon.

The exit visa system has long been savaged by critics of Qatar’s labor practices as a prime example of the Gulf state’s exploitation of its vast migrant workforce, which numbers some two million. (READ: How the kafala system enslaves workers in Qatar)

Qatar has come under intense international pressure and scrutiny since it won the right to host the World Cup, for which it has said it is spending $500 million a week on major infrastructure projects.

Labor Minister Issa Saad al-Jafali al-Nuaimi, who cut a ribbon at the opening of the ILO office, said the inauguration was “another step towards ensuring Qatar has a labor system that reflects global best practice.”

“The Government of Qatar now has another partner to promote and protect the rights of our guest workers,” he said.

A deal to establish an ILO office in Qatar was made last October after Doha agreed to a wholesale package of labor reforms which also included introducing a minimum wage and a grievance procedure for workers.

Doha and the ILO have signed a 3-year program of technical cooperation on labor issues.

Human rights group Amnesty International said in a statement Sunday that Qatar should introduce “a timetable for meaningful” reform.

Qatar should “urgently publish a robust and effective plan of action to remove the excessive restrictions that enable employers to trap migrant workers in exploitative situations,” it said.