Apr 30, 2018 9:55 AM PHT
Agence France-Presse
Facebook Twitter Copy URL
Copied
'Love for all, hatred for none,' is the message seen on large posters and blue T-shirts in the crowd, which included Prime Minister Justin Trudeau 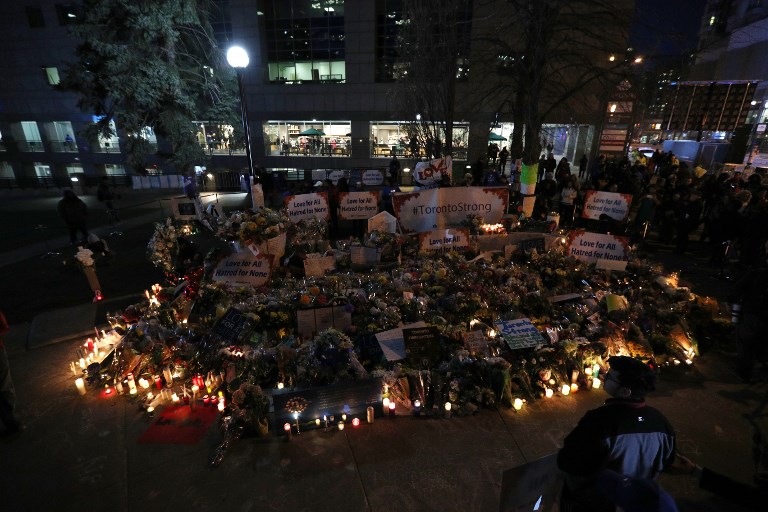 TORONTO, Canada – Thousands gathered at a vigil on Sunday night, April 29, paying tribute to 10 people mowed down by a van in downtown Toronto earlier this week.

Ten candles, sheltered from the wind by tealight holders, were placed on a stage in memory of the eight women and two men struck by a rental van driven by Alek Minassian on Monday.

The victims, who ranged in age from 22 to 94, were killed when the suspect drove along a sidewalk in the north end of Canada’s largest city. Sixteen others were injured.

“Love for all, hatred for none,” was the message seen on large posters and blue T-shirts in the crowd, which included Prime Minister Justin Trudeau.

“Our sorrows are reflected in the eyes of the stranger beside to us. We stand together,” said Reverend Alexa Gilmore of the Windermere United Church, opening the somber event, which saw representatives from each of Toronto’s diverse range of religious communities offer tribute.

“Toronto has felt the pain of other cities,” affected by vehicle ramming attacks, such as London, Paris and Berlin, said Rabbi Barud Frydman.

In the wake of the killings, police concluded that 25-year-old Minassian had targeted “predominantly women,” having posted a “cryptic” message on Facebook minutes before the attack.

In the post, Minassian praised mass killer Elliot Rodger – a 22-year-old American who murdered six people and then killed himself in California in 2014, and who had professed frustration over his virginity and women rejecting him.

The suspect’s post also referred to the “Incel Rebellion” – “incel” is short for “involuntarily celibate” and is often used in connection with online groups of sexually frustrated men who are known to rant against women.

Minassian was arrested seven minutes after the first call to an emergency hotline. He now faces 10 counts of premeditated murder, as well as the multiple attempted murder charges related to the injured survivors. – Rappler.com