May 1, 2018 9:38 AM PHT
Agence France-Presse
Facebook Twitter Copy URL
Copied
In the suit, Daniels – whose real name is Stephanie Clifford – says that Donald Trump made 'false and defamatory' statements about her in an April 18 tweet 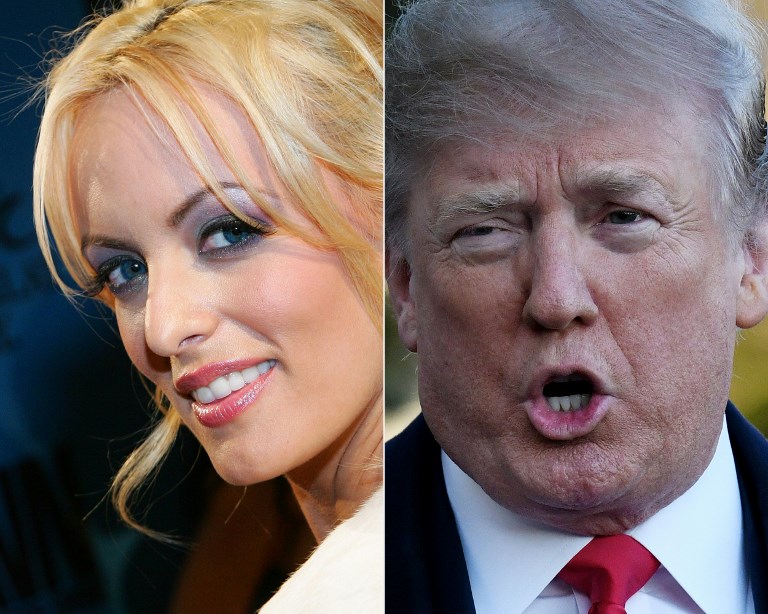 Daniels, whose real name is Stephanie Clifford, lodged the complaint with the US District Court for the Southern District of New York.

In the suit, Clifford said that Trump made “false and defamatory” statements about her in an April 18 tweet.

Trump’s tweet was in response to the release by Clifford the previous day of a sketch of a man whom she claimed warned her in 2011 to “leave Trump alone.”

Clifford claimed she was threatened in a Las Vegas parking lot after agreeing to an interview with “In Touch” magazine about her alleged affair with Trump.

After Clifford released a drawing of the man she said threatened her, Trump tweeted: “A sketch years later about a nonexistent man. A total con job, playing the Fake News Media for Fools (but they know it)!”

A sketch years later about a nonexistent man. A total con job, playing the Fake News Media for Fools (but they know it)! https://t.co/9Is7mHBFda

“Mr Trump’s statement falsely attacks the veracity of Ms Clifford’s account of the threatening incident that took place in 2011,” the lawsuit said.

“Mr Trump’s statement is false and defamatory,” it said. “Mr Trump used his national and international audience of millions of people to make a false factual statement to denigrate and attack Ms Clifford.

“Ms Clifford has suffered damage as a result of Mr Trump’s false and defamatory statement in an amount to be proven at trial but in excess of $75,000,” it said.

Since Trump’s statement, Clifford has received further threats and has had to hire bodyguards, the complaint said.

“Ms Clifford has been exposed to death threats and other threats of physical violence, causing her both emotional and economic damages,” it said.

Clifford has sued Trump in Los Angeles seeking to have the “hush agreement” invalidated. The next hearing in that case has been set for July 27.

Cohen, meanwhile, has legal troubles of his own.

The FBI raided his home and office in early April and seized documents and other material in connection with a criminal investigation.

The nature of the alleged criminal wrongdoing by Trump’s personal attorney has not been revealed.

Trump is also being sued by a woman named Summer Zervos, who alleged he kissed her forcibly in 2007. A New York judge in March ruled that the case, which like the Daniels’ lawsuit is for defamation, can move forward. – Rappler.com