May 1, 2018 2:38 PM PHT
Agence France-Presse
Facebook Twitter Copy URL
Copied
(UPDATED) The questions also show that Special Counsel Robert Mueller wants to find out what US President Donald Trump knew about links between members of his presidential campaign and Russia 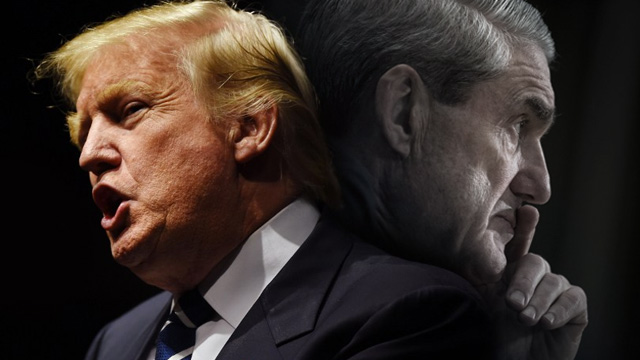 WASHINGTON DC, USA (UPDATED) – Donald Trump lashed out Tuesday, May 1, at the “disgraceful” disclosure of questions Special Counsel Robert Mueller has sought to ask the US president about potential obstruction and other matters as part of his probe into Russian election interference.

Compiled by the president’s lawyers, the questions lay out detailed lines of inquiry by Mueller into whether Trump may have tried to obstruct the Russia probe, The New York Times reported.

The questions – at least 4 dozen in all – also show Mueller wants to find out what Trump knew about links between members of his presidential campaign and Russia, including a June 2016 meeting at Trump Tower with a Russian lawyer offering damaging information on election rival Hillary Clinton, the Times said.

“It would seem very hard to obstruct justice for a crime that never happened! Witch Hunt!” Trump shot back in a round of early-morning tweets.

It would seem very hard to obstruct justice for a crime that never happened! Witch Hunt!

Trump incorrectly claimed there were no questions on the list about collusion, which he dismissed as “a made up, phony crime.”

In fact, at least one question directly asks what Trump knew about his campaign aides, including former chairman Paul Manafort, seeking Russia’s assistance, according to the Times.

“What knowledge did you have of any outreach by your campaign, including by Paul Manafort, to Russia about potential assistance to the campaign?” reads the question.

The questions also show Mueller wants to know if Trump offered a pardon to his former national security advisor, Michael Flynn, who has already been charged with lying to investigators and is believed to be cooperating with the investigation.

But there is no indication Trump is now an official suspect of the year-old probe, or that Mueller has found evidence Trump colluded with the Russians, which Trump on Tuesday again denied, as he has done repeatedly.

However, The Washington Post reported late Tuesday that Mueller told the president’s lawyers in early March that he could issue a subpoena for Trump to appear before a grand jury if he refuses to be interviewed by federal investigators.

The Post said that it was following that conversation that Trump lawyer Jay Sekulow compiled a list of 49 questions that could be addressed to the president – the list published a day earlier by the Times.

“So disgraceful that the questions concerning the Russian Witch Hunt were ‘leaked’ to the media,” Trump said on Twitter.

“Oh, I see…you have a made up, phony crime, Collusion, that never existed, and an investigation begun with illegally leaked classified information. Nice!”

So disgraceful that the questions concerning the Russian Witch Hunt were “leaked” to the media. No questions on Collusion. Oh, I see…you have a made up, phony crime, Collusion, that never existed, and an investigation begun with illegally leaked classified information. Nice!

The Times said Mueller’s team read the questions over the telephone to Trump’s legal team, which compiled them into a list.

The Times said it obtained the list from someone outside Trump’s legal team.

Mueller’s office did not immediately respond to requests for comment.

Since at least early this year, Mueller has discussed the possibility of interviewing Trump for the investigation, according to the president’s lawyers.

But they appear to have been divided on how and how much Trump should cooperate.

Two weeks ago, Trump recruited to his legal team former New York mayor Rudy Giuliani, who said he would try to reach a deal with Mueller on how the president would cooperate with the probe.

Most of the questions reported by the Times ask what Trump knew of certain events, like the June 2016 meeting with the Russian lawyer, or what was he was thinking when he did or said something, like firing former FBI director James Comey.

“When did you become aware of the Trump Tower meeting?” one question asks.

“What efforts were made to reach out to Mr Flynn about seeking immunity or possible pardon?” goes another.

Mueller also wants to know if Trump discussed with any campaign staff arranging a meeting with Russian President Vladimir Putin.

While none of the questions is accusatory, they could carry the risk of Trump’s being trapped in a lie if any of the former staff already indicted by Mueller have provided evidence to the contrary. – Rappler.com