The disappearing jobs of yesterday 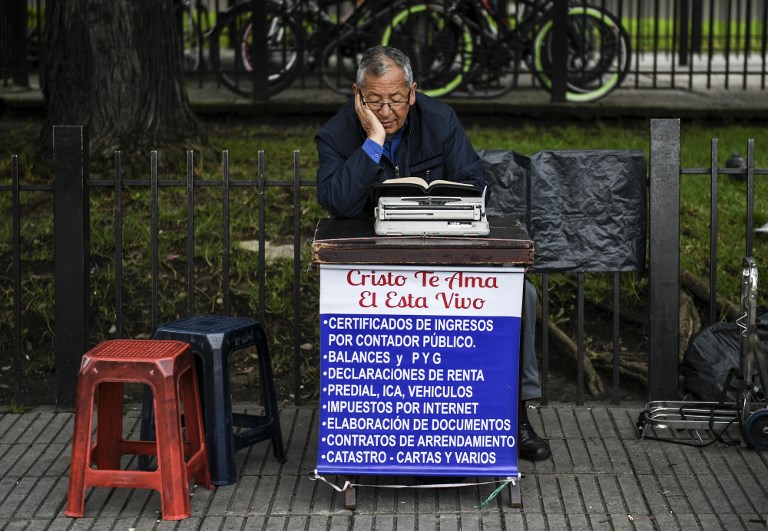 The last street clerks of Bogota

Inserting a blank sheet into her Remington Sperry, Candelaria Pinilla de Gomez starts typing. One of Bogota’s street clerks, she has spent the last 40 years typing up countless thousands of documents.

Aged 63, she is the only woman among the street clerks who have set up their tiny tables on the pavement outside a modern office block in Bogota.

Wearing suits but no ties, the writers work in the open air, under a parasol, seated on a plastic chair with the typewriter on their knees.

Once upon a time, these clerks played an essential role – with public deeds, tax documents and contracts all passing through their hands. 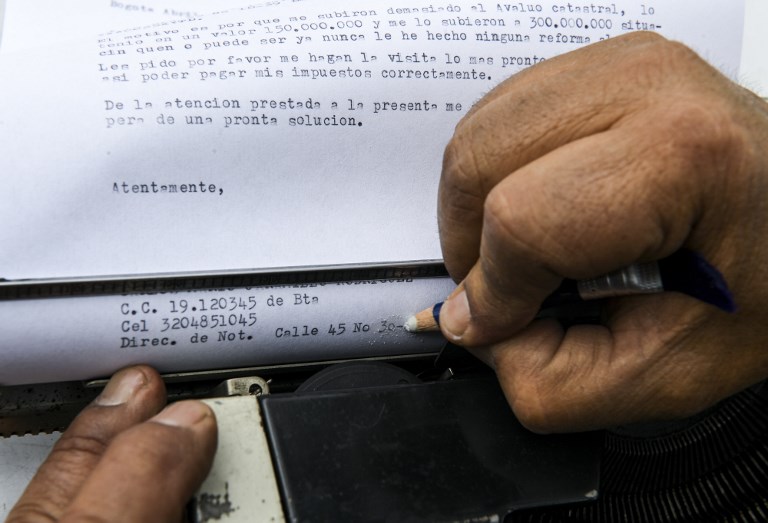 Pinilla de Gomez learned the trade from her husband when they arrived in the Colombian capital in the 1960s. He had a farm “but the guerrillas took it off him,” she says.

“In Bogota, he told me I should learn how to type… and to spell. He taught me (the job) and then he died.”

Cesar Diaz, now 68, prides himself on being the pioneer of a trade which has ended up becoming a “refuge” for pensioners looking to top up their monthly allowances.

They work from Monday to Friday and earn less than $280 which is the minimum wage.

Until now, they have managed to survive pretty much everything – except perhaps the advent of the internet.

“These days, a mother will ask her son to download a form, fill it in and send it by internet,” admits Pinilla de Gomez.

“That really screws things up for us.” 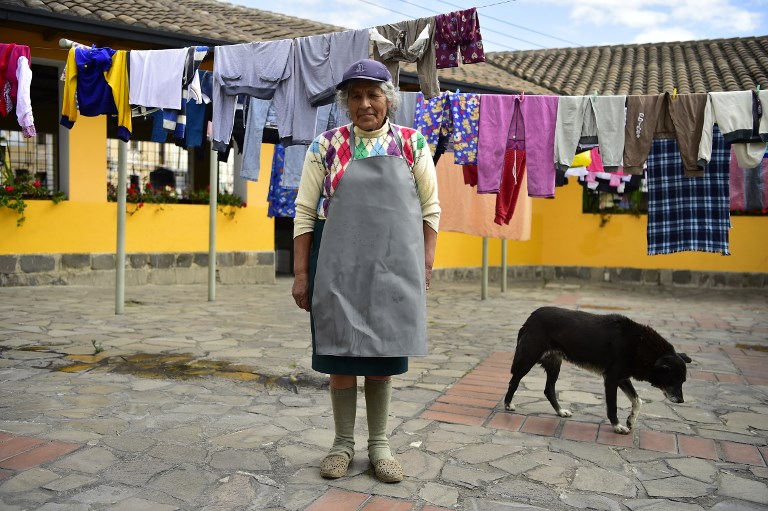 Delia Veloz’s hands have almost lost their fingerprints from the constant rhythmic motion of rubbing dirty clothes against rough stones at an old public laundry in Quito.

With a mop of curly gray curls, this 74-year-old is one of the few people left in Ecuador who still practises the ancient and demanding work of a washerwoman – a trade which is increasingly rare due to the widespread use of domestic washing machines.

“I don’t like washing machines, they don’t wash very well. You can scrub things better by hand,” Veloz tells AFP with pride as she pours a jar of freezing water from the Andes over a jacket.

For more than 5 decades she has been working at the Ermita, a public laundry in the colonial center of Quito with her rectangular stone, tank of water and various wires for hanging things out to dry. 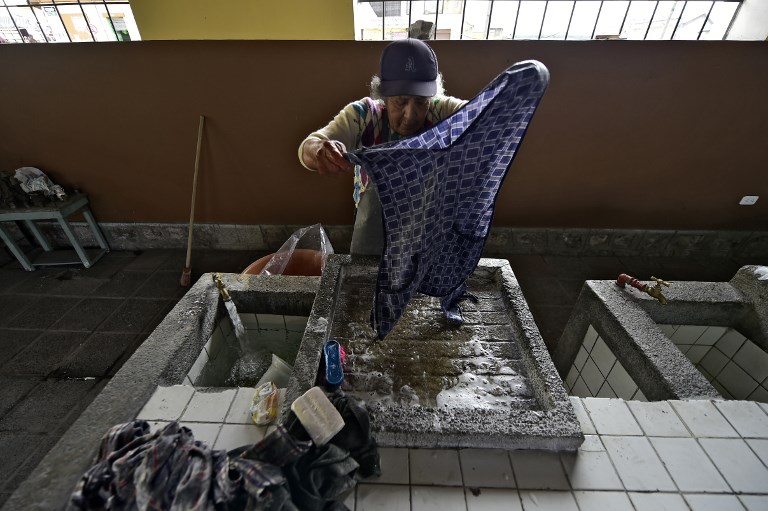 For every 12 articles of clothing, she earns $1.50 (1.20 euros) from her increasingly few customers – mostly those who don’t have a washing machine or who prefer things to be washed by hand.

In Quito, there are still at least 5 public laundries which were built in the first half of the 20th century.

There are also those who come to use the laundry to wash their own clothes or those belonging to their employers – for which there is no fee.

And once a month, they all get together to keep the premises neat and tidy. 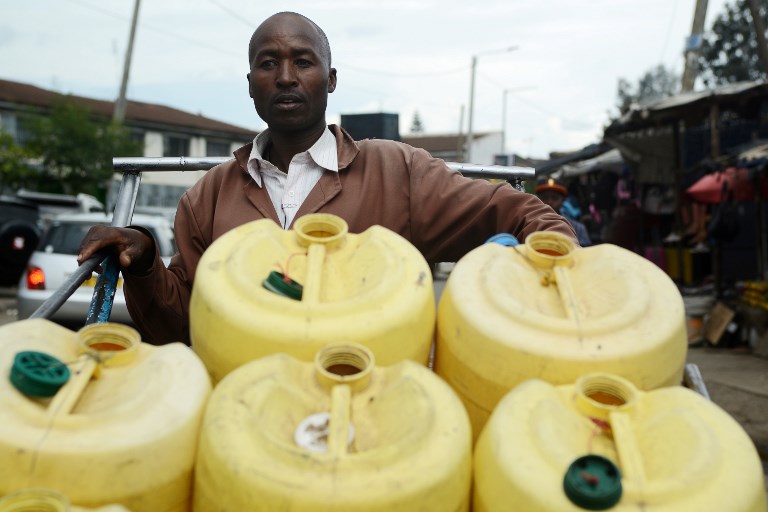 The lack of running water in Kenya’s poorest neighbourhoods have, for the last 18 years, meant a living for Samson Muli, a water seller in Nairobi’s Kibera slum.

“Growing up I wanted to be a business man,” says the 42-year-old father of two, who supplies water to butchers, fishmongers and restaurants in the crowded Kenyatta market.

Dressed in a dun dustcoat Muli uses a hose to fill his array of cylindrical 20-litre jerrycans with water from 3 freestanding 10,000-litre tanks. He loads 15 at a time onto a trolley, and hauls them off to his clients. 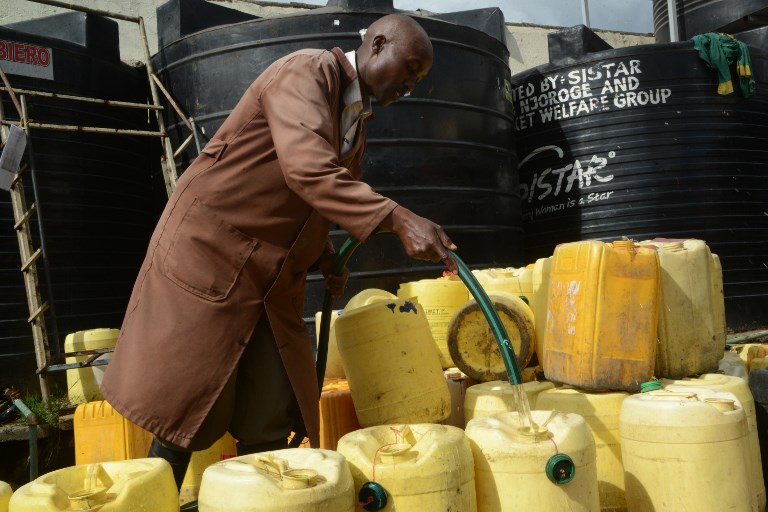 “This job has changed my life because my children are able to go to school and I am able to afford to pay school fees for them,” he says.

But Kenya’s gradual development and the spreading provision of basic infrastructure, including piped water, means Muli’s profitable days are numbered. 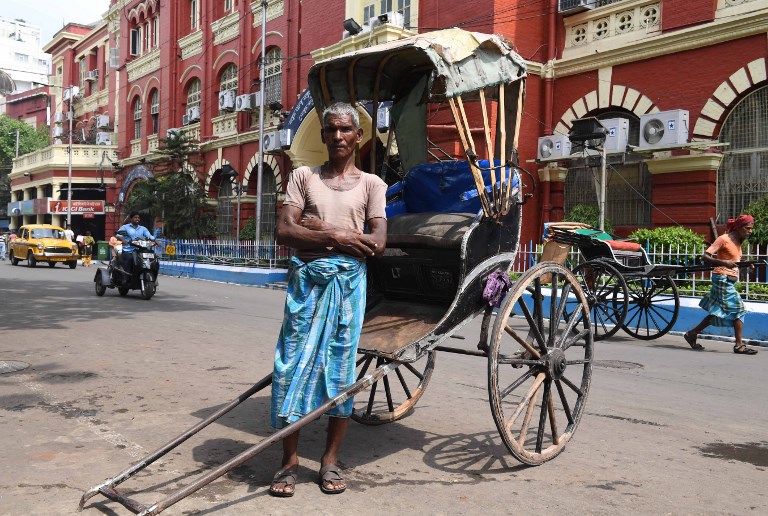 Mohammad Maqbool Ansari puffs and sweats as he pulls his rickshaw through Kolkata’s teeming streets, a veteran of a gruelling trade long outlawed in most parts of the world and slowly fading from India too.

Kolkata is one of the last places on earth where pulled rickshaws still feature in daily life, but Ansari is among a dying breed still eking a living from this back-breaking labour.

The 62-year-old has been pulling rickshaws for nearly 4 decades, hauling cargo and passengers by hand in drenching monsoon rains and stifling heat that envelops India’s heaving eastern metropolis. 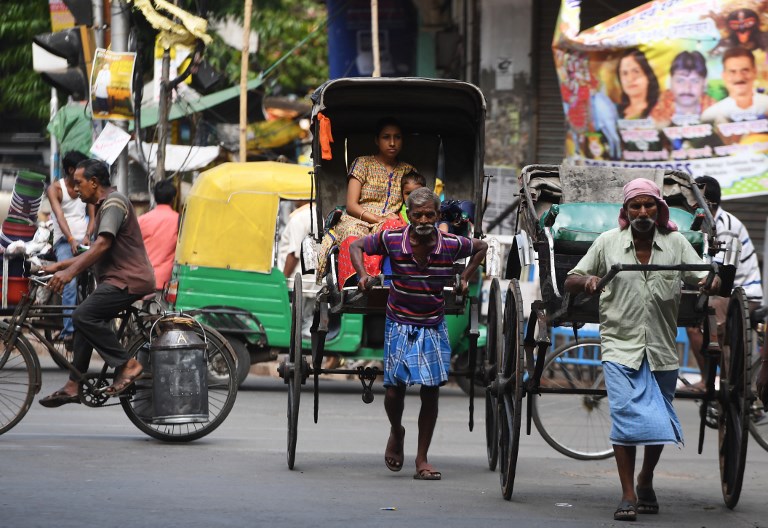 Their numbers are declining as pulled rickshaws are relegated to history, usurped by tuk tuks, Kolkata’s famous yellow taxis and modern conveniences like Uber.

Ansari cannot imagine life for Kolkata’s thousands of rickshaw-wallahs if the job ceased to exist.

“If we don’t do it, how will we survive? We can’t read or write. We can’t do any other work. Once you start, that’s it. This is our life,” he tells AFP.

Sweating profusely on a searing-hot day, his singlet soaked and face dripping, Ansari skilfully weaved his rickshaw through crowded markets and bumper to bumper traffic.

Wearing simple shoes and a chequered sarong, the only real giveaway of his age is a long beard, snow white and frizzy, and a face weathered from a lifetime plying this trade.

Twenty minutes later, he stops, wiping his face on a rag. The passenger offers him a glass of water – a rare blessing – and hands a bill over.

“But I’m happy with being a rickshaw puller. I’m able to feed myself and my family.” 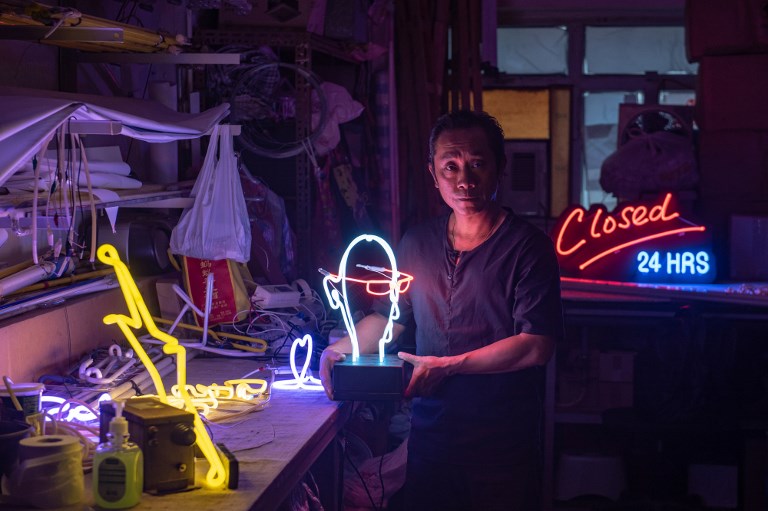 Neon sign maker Wu Chi-kai is one of the last remaining craftsmen of his kind in Hong Kong, a city where darkness never really falls thanks to the 24-hour glow of myriad lights.

During his 30 years in the business, neon came to define the urban landscape, huge flashing signs protruding horizontally from the sides of buildings, advertising everything from restaurants to mahjong parlours.

But with the growing popularity of brighter LED lights, seen as easier to maintain and more environmentally friendly, and government orders to remove some vintage signs deemed dangerous, the demand for specialists like Chi-kai has dimmed.

Despite a waning client-base, the 50-year-old continues in the trade, working with glass tubes dusted inside with fluorescent powder and containing various gases including neon or argon, as well as mercury, to create different colours. 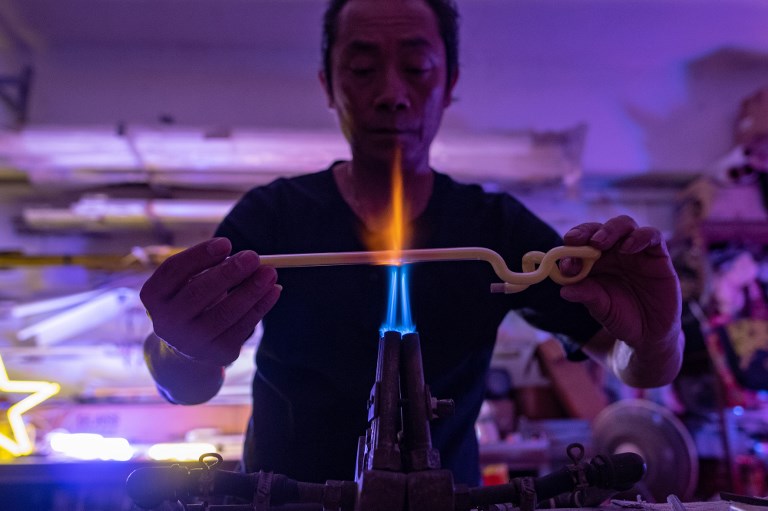 He bends them into shape over a powerful gas burner at a scorching 1,000 degrees Celsius.

“Being able to twist straight glass materials into the shape I want, and later to make it glow – it’s quite fun,” he tells AFP, though it is not without risks.

Chi-kai works without a safety visor and has been scalded and cut by glass which sometimes cracks and explodes.

“The painful experiences are the memorable ones,” he adds philosophically.

Believing the installation work too dangerous for his son, he instead encouraged him to learn to make the signs as a teenager. Chi-kai became one of only around 30 masters of the craft in Hong Kong, even in neon’s heyday.

Although demand is now significantly lower than at neon’s peak in the 1980s, he says, there has been renewed interest and nostalgia for its gentler glow, immortalised in the atmospheric movies of award-winning Hong Kong director Wong Kar-wai.

Some of Chi-kai’s clients are now requesting pieces for indoor decoration.

“I’ve been working with neon lights all my life. I can’t think of anything else I’d be better suited for,” he says. 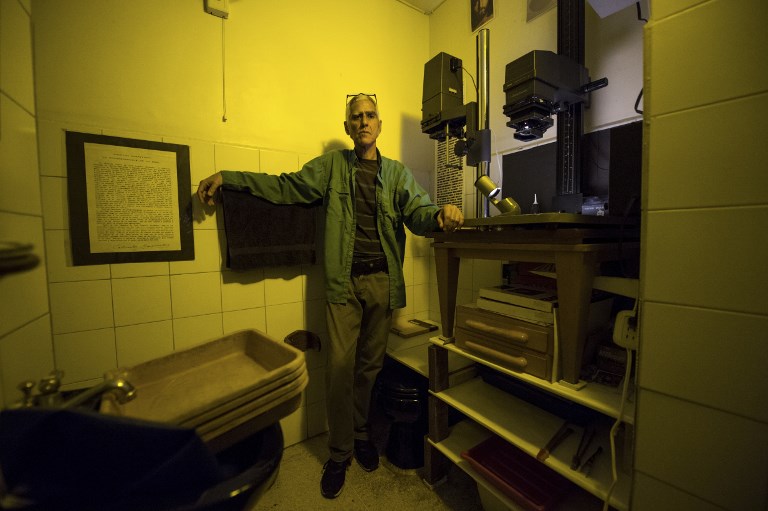 With an ancient 50-year-old Olympus camera and an enlarger that he bought in 1980, Venezuelan photographer Rodrigo Benavides works his “magic” inside a tiny improvised darkroom at home.

Although working with equipment and techniques that have virtually disappeared, he carries on as if digital photography doesn’t exist.

“Doesn’t interest me at all,” he says.

Using his bathroom as a makeshift lab, he develops negatives, turning them into black and white prints. And it still fascinates him every time as the image slowly emerges on coming in to contact with the chemicals.

“I have always tried to be economical with my resources, always have done, always will do,” he says, extolling the wonders of his Olympus 35 SP which uses a reel of film, doesn’t need batteries and is completely manual.

Born in Caracas 58 years ago, he still remembers the excitement when, at the age of 19, he bought the enlarger in London. 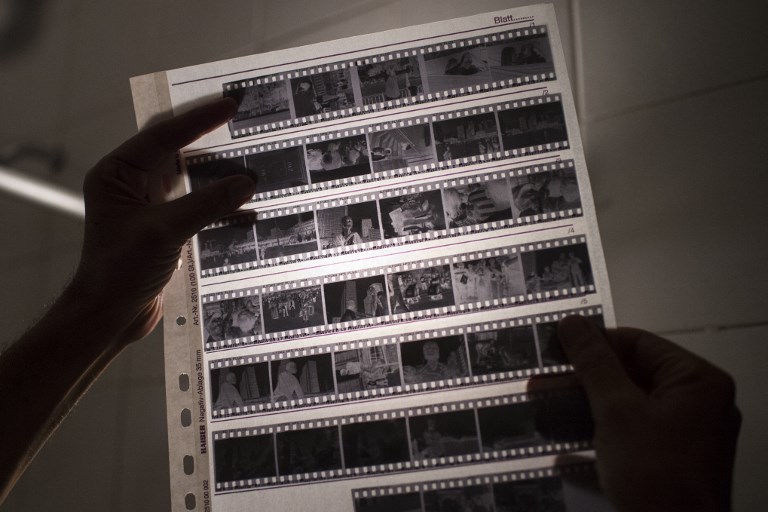 And it was there that he became a keen follower of Group f/64, an influential movement of photographers who championed sharp-focused, unretouched images of natural subjects.

He thinks technology has “upended” photography, turning it into a work of “fiction.”

“We have become desensitised to reality, which is much more interesting than fiction,” he says.

Some 400 of his pictures taken over 30 years have been compiled into a book on the Venezuelan plains. Others are stacked up in his living room, forming a towering pile, some two meters high.

“They are like my children,” says Benavides, who describes himself as a documentary photographer practising a trade on the verge of extinction.