May 3, 2018 7:30 AM PHT
Rappler.com
Facebook Twitter Copy URL
Copied
This worldwide campaign aims to bring together media groups from different countries and regions to support free and independent media 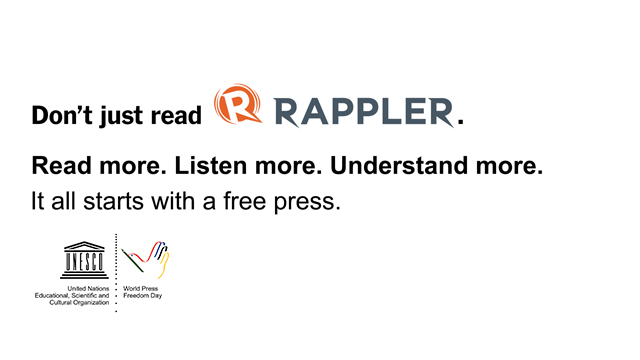 MANILA, Philippines – The United Nations Educational, Scientific and Cultural Organization (Unesco) on Tuesday, May 1, announced its partnership with Rappler and other major global news organizations for the commemoration of World Press Freedom Day on May 3. This worldwide campaign aims to bring together media groups from different countries and regions to support free and independent media.

This is the first time that a global alliance of independent news organizations will come together to “encourage their readers to consume news from various publications.”

Guy Berger, director for Freedom of Expression and Media Development at Unesco, welcomed this campaign as a radical move towards unity.

“We are delighted to see a broad coalition of media organizations coming together in support of World Press Freedom Day, as we strongly believe the press should be at the heart of this celebration,” said Berger.

“It’s inspiring to see this common effort to promote the fundamentals of press freedom at a time when we need it most,” he added.

Rappler CEO Maria Ressa highlighted the significance of this campaign, and the importance of speaking truth to power.

“Rappler is proud to join this global coalition in support of press freedom, especially since this year, our banner is #DefendPressFreedom,” said Ressa.

“As president of this year’s jury to select the Unesco/Guillermo Cano World Press Freedom Prize, I saw the rollback of press freedom around the world and the greater challenges journalists face just to tell a story,” she added.

“We want to tell him the world hasn’t forgotten him, and we hope that his courage and steadfast adherence to his profession remains a guiding light to journalists around the world,” Ressa added.

Earlier this week, Unesco also launched another campaign for World Press Freedom Day. In a series of videos published on YouTube, renowned journalists talked about the importance of press freedom in a democracy. (READ: #25SecondsForPressFreedom: Journalists explain why press freedom matters)