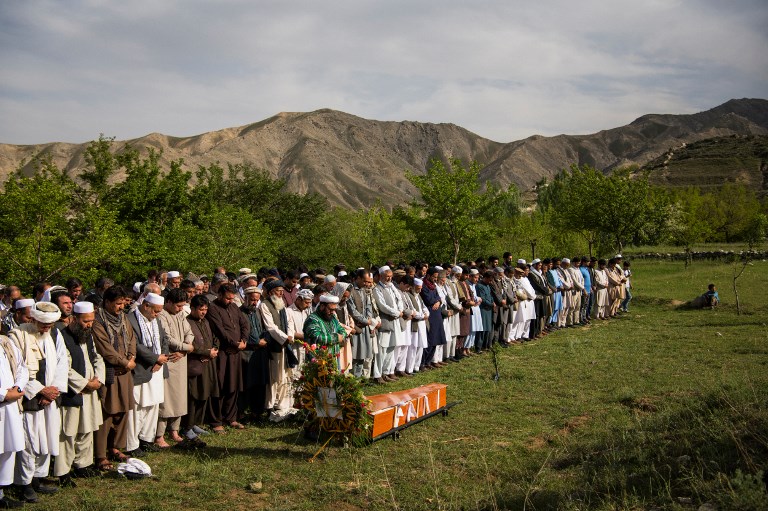 KABUL, Afghanistan – Condemnation poured in from across the world Tuesday, May 1, after 10 journalists were among dozens killed in attacks in Afghanistan, in what the UN described as the “deliberate targeting” of the media.

A double suicide blast in Kabul left 25 people dead including AFP photographer Shah Marai and 8 other journalists, while a BBC reporter was killed in a separate attack in eastern Khost province.

The second Kabul bomber disguised himself as a journalist and detonated himself among the crowd, police said, in what Reporters Without Borders said was the most lethal single attack on the media since the fall of the Taliban.

Journalists from Radio Free Europe and Afghan broadcasters Tolo News and 1TV were among the others killed.

United Nations Secretary-General Antonio Guterres said he was “outraged” by the suicide blasts, which were claimed by the Islamic State group and left another 49 people wounded.

“The deliberate targeting of journalists in the attack highlights once again the risks media professionals face in carrying out their essential work,” he said.

In a third strike on a bloody day for Afghanistan, 11 children were killed and 16 people wounded, including Romanian and Afghan soldiers, when another suicide attacker exploded his car near a NATO convoy in southern Kandahar province.

US Defense Secretary Jim Mattis said that the weakened militants were targeting journalists in Afghanistan in order to undermine the electoral process ahead of an expected vote in October.

“This is the normal stuff by people who cannot win at the ballot box, so they turn to bombs,” he said.

“The vibrant media landscape that has developed in Afghanistan will endure, in large part due to those journalists and media professionals who tragically died in today’s attack, but whose courageous and steadfast work helped lay the foundation for Afghanistan’s thriving and resilient independent media,” he said.

The BBC confirmed that its reporter, 29-year-old Ahmad Shah who had worked for the broadcaster for more than a year, was shot by unidentified armed men in Khost and that police were investigating the motive.

The attacks came days after the Taliban began a spring offensive, in an apparent rejection of a peace talks overture by the Afghan government.

Afghanistan was last year ranked the third most dangerous country in the world for journalists by Reporters Without Borders (RSF) and on Monday the watchdog urged the international community to guard the media from future attacks.

“It is high time that the UN send a strong signal to the international community and to local protagonists by appointing a Special Representative for the protection of journalists,” the group’s chief Christophe Deloire said.

Human Rights Watch also warned that a deliberate attack on civilians was a “war crime”, adding in a statement Tuesday: “Journalists have long paid a high price for covering Afghanistan’s armed conflict.”

RSF said that since 2016, it has recorded the killings of 34 journalists in Afghanistan.

In 2016, seven employees of popular TV channel Tolo were killed in a Taliban suicide bombing. And in November last year, broadcaster Shamshad TV was stormed by gunmen who killed one person.

After that strike, the defiant station was back on the air within hours, with a newscaster with bandaged hands reporting on the attack as its director vowed: “They cannot silence us.”

AFP’s Marai joined the agency as a driver in 1996, the year the Taliban seized power. He soon began taking pictures on the side, covering stories including the US invasion in 2001.

In 2002, he became a full-time photo stringer, rising through the ranks to become the bureau’s chief photographer.

During his career he was beaten and threatened by the Taliban, and suffered devastating personal loss including in 2014 when AFP senior reporter and his good friend Sardar Ahmad was killed along with his wife and two of his children in a Taliban attack.

Marai, 41, left behind six children, including a newborn daughter.

He was buried near his home village in the Shomali Plain, north of Kabul, later Monday in a ceremony attended by heartbroken relatives, friends and colleagues.

“This tragedy reminds us of the danger that our teams continually face on the ground and the essential role journalists play for democracy,” AFP’s CEO Fabrice Fries said. – Rappler.com