May 2, 2018 3:44 PM PHT
Agence France-Presse
Facebook Twitter Copy URL
Copied
'US Forces Korea (USFK) is a matter of the South Korea-US alliance. It has nothing to do with signing a peace treaty,' says South Korean President Moon Jae-in 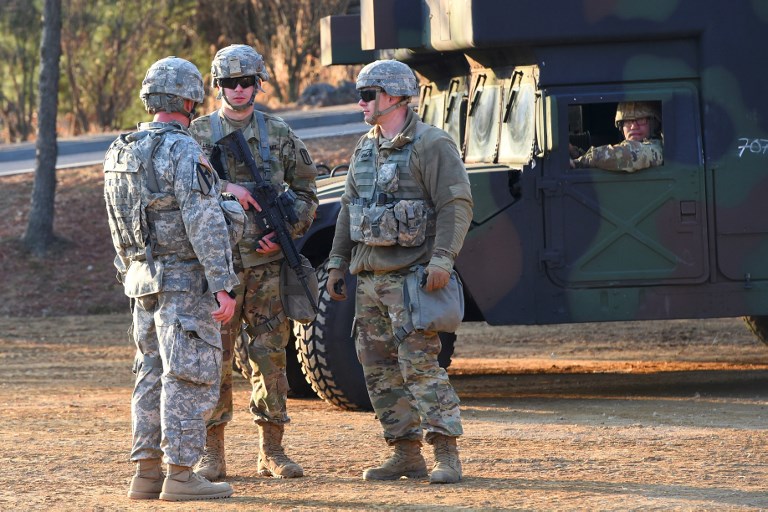 SEOUL, South Korea – South Korean President Moon Jae-in on Wednesday, May 2, dismissed claims that US troops stationed in the country would have to leave if a peace treaty was signed with the North.

Seoul and Pyongyang have remained technically at war since the 1950s but Moon and North Korean leader Kim Jong Un agreed at a landmark summit last week to work towards a permanent treaty to replace a 65-year-old armistice agreement.

“US Forces Korea (USFK) is a matter of the South Korea-US alliance. It has nothing to do with signing a peace treaty,” Moon said, referring to the agreement that sees 28,500 US forces based in the South.

Moon’s comments came after a presidential adviser publicly suggested the presence of US soldiers, sailors and airmen would be called into question if a peace treaty were to be agreed with Pyongyang.

Moon Chung-in had written in Foreign Affairs magazine that it would be “difficult to justify (US forces) continuing presence in South Korea” after the adoption of a peace treaty.

The Blue House – President Moon’s office – has warned the adviser “not to cause any more confusion,” with such comments, spokesman Kim Eui-kyeom said.

The rebuttal came as Seoul’s defense ministry confirmed that several US fighter jets had arrived in the country to take part in a regular joint exercises.

The F-22 “Raptor” stealth fighters last came to the South in December when Seoul and Washington staged their largest-ever joint air exercise, days after North Korea test-fired a missile believed to be capable of hitting the US mainland.

Local media reported 8 F-22 jets had arrived Sunday, April 29, at an airbase in the southern city of Gwangju.

The North customarily reacts with anger to the deployment of American stealth fighters, which it fears could be used for surgical strikes against its leadership and strategic facilities.

However, Kim Jong-Un has recently shown a more conciliatory attitude, telling Seoul envoy Chung Eui-yong in March that he understood the need for the US-South Korea joint exercises.

The “Max Thunder” drill will kick off on May 11 for two weeks, with the reported participation of 100 aircraft from both countries.

The defense ministry urged news media to refrain from producing “speculative reports” about the move.

That request came after the conservative Chosun Ilbo daily claimed the aircraft deployment could be intended to heap pressure on Pyongyang ahead of a planned summit between Kim Jong Un and US President Donald Trump.

“Max Thunder is a regular exercise that has been on the docket long before a planned US-North Korea summit,” the defense ministry said in a statement.

The Panmunjom truce village in the demilitarized zone between North and South, where last week’s inter-Korean summit was convened, has emerged as a possible venue for the Kim-Trump meeting.

The Chosun Ilbo daily suggested the arrival of F-22 jets could also be aimed at bolstering security in case the North Korea-US summit takes place at Panmunjom. – Rappler.com