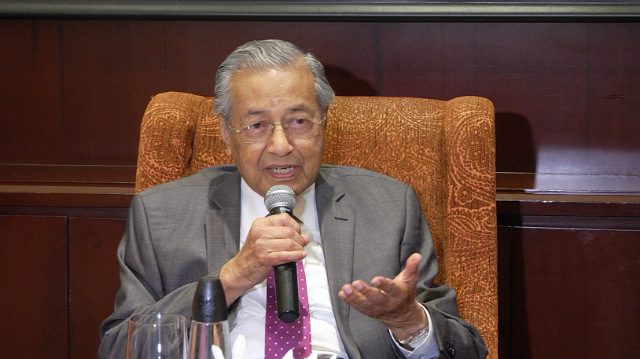 Veteran ex-leader Mahathir, 92, is seeking to oust his former protege, Prime Minister Najib Razak, in the general election next Wednesday, May 9, at the head of an opposition alliance.

As campaigning got underway at the weekend, Mahathir claimed that there had been an attempt to sabotage a plane he had chartered to prevent him heading to the island of Langkawi to formally register his candidacy for the election.

He still made it to the island by taking another plane. Malaysia’s civil aviation authority and the charter company said there was a technical issue with the plane but rejected the allegations of sabotage.

Kuala Lumpur police said a report had been lodged accusing Mahathir of spreading “fake news” under a controversial new law, which critics say is aimed at cracking down on dissent before the poll.

“We have opened an investigation (into Mahathir) under the anti-fake news law,” the capital’s police chief Mazlan Lazim told Agence France-Presse.

“We will conduct the normal process of investigation.”

The law aimed at combating fake news was pushed through parliament last month despite an outcry by the opposition and media watchdogs.

It punishes dissemination of any news deemed “wholly or partly fake” with up to 6 years in jail or a hefty fine.

Critics say it is aimed at silencing criticism of Najib, and in particular the scandal surrounding sovereign wealth fund 1MDB.

Najib is battling allegations that billions of dollars were looted from the fund – which he set up – in a campaign of fraud and money-laundering. The leader and 1MDB deny any wrongdoing.

A Danish man was handed a one-week jail term this week for spreading fake news, the first person to be punished under the legislation, after accusing police in a YouTube video of responding slowly when a Palestinian Hamas member was shot dead last month.

Mahathir led Malaysia for 22 years and was spurred out of retirement to take on Najib due to 1MDB, and is the opposition’s prime ministerial candidate.

Najib’s Barisan Nasional coalition has led Malaysia for 61 years, since independence from Britain, and is expected to win at the poll. – Rappler.com