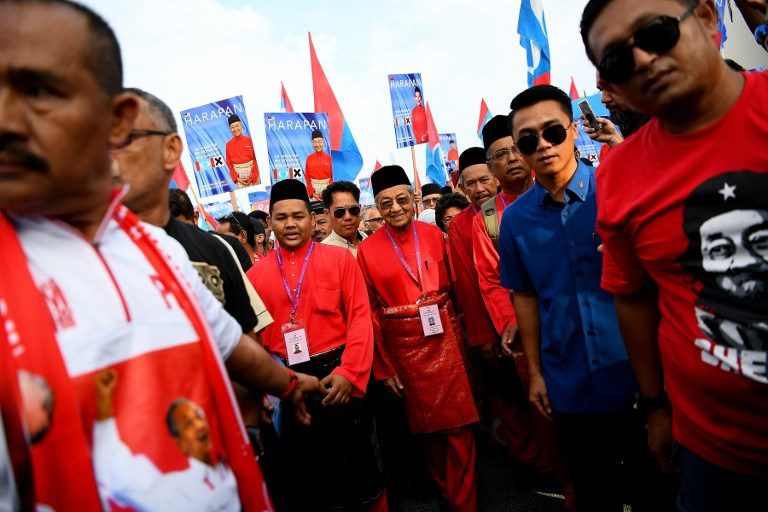 Facebook Twitter Copy URL
Copied
The optimism has been triggered by the decision of 92-year-old former leader Mahathir Mohamad, a champion of the country's Muslim Malays, to run as the opposition's prime ministerial candidate

KUALA PILAH, Malaysia – Malaysia’s opposition hopes a surge of support from disillusioned members of the country’s Muslim majority can carry them to an unlikely victory in elections on Wednesday, May 9.

The optimism has been triggered by the decision of 92-year-old former leader Mahathir Mohamad, a champion of the country’s Muslim Malays, to run as the opposition’s prime ministerial candidate.

They believe his connection to rural Muslim voters can trigger what they have dubbed a “Malay tsunami” and unseat Prime Minister Najib Razak’s coalition after 6 decades in power.

Amid escalating anger over a massive financial scandal, Mahathir came out of retirement to take on his former protege Najib, upending an election race that had long looked like an easy win for the government.

Malays, who make up some 60% of the country’s 32 million people, have long formed the bedrock of support for Najib’s Barisan Nasional (BN) coalition, and winning over the group is key to victory in a Malaysian election.

BN has pushed policies that favor Malays over the country’s substantial ethnic Chinese and Indian minorities, supporting them with financial handouts and priority in securing government jobs.

The opposition, which has sought to project a more multi-racial image, has been unable to mobilize support among rural Malays, adding to difficulties of trying to unseat a deeply entrenched government.

But the decision of Mahathir, who ruled Malaysia with an iron fist for 22 years, to join the opposition is threatening Najib’s Muslim support base as anger grows over soaring living costs and corruption.

In the small town of Kuala Pilah, Malay businessman Abdul Moktar Awalluddin said he had dropped his life-long support for Najib’s United Malays National Organisation (UMNO), the main party in the ruling coalition.

“Rural Malays are suffering economically and many – including myself – will vote for the opposition led by Mahathir Mohamad.”

Despite the anger, Najib is still expected to win due to what the opposition claims is poll-rigging, and a system that requires only a simple majority of MPs in parliament to maintain power.

Malay complaints over rising costs and stagnant wages have been growing louder in recent years, especially in the countryside, and after the introduction of an unpopular sales tax in 2015.

The scandal surrounding sovereign wealth fund 1MDB has not helped, although in rural areas the complex controversy has generally taken a back seat to economic worries.

Mahathir has sought to capitalize on his enduring popularity among Malays to win them over to his 4-party opposition alliance.

Many still remember him fondly as a champion of the Muslim majority and father of modern Malaysia and the architect of policies that transformed a sleepy Southeast Asian backwater into a relatively affluent country.

Some do feel uneasy about his comeback – he was accused of being authoritarian during his time in power, and was criticized for jailing opponents and undermining the country’s institutions.

He has nevertheless successfully tapped into rising anger among Malays in rural areas and many have swung behind his new Bersatu party, switching from UMNO.

“UMNO under Najib has not only failed the Malays but also other communities,” said Eddin Syazlee Shith, a former ruling party member who left to join Bersatu, and is now a parliamentary candidate for Kuala Pilah.

But Najib has been fighting back, touring rural Malay heartlands and warning that victory for the opposition would undermine the privileges enjoyed by the country’s Muslims.

“We cannot be confident that (the opposition) will look after our interests, especially the people in the rural areas, the interests of Islam and the interests of the Malays,” he told a rally in Pahang state at the weekend, state news agency Bernama reported.

But most analysts believe the swing in Malay support will not be strong enough to produce an opposition win.

A survey last month by leading independent pollster the Merdeka Center showed that BN had lost 8% Malay support, but that this support was split between the main opposition grouping and a smaller Islamic party.

James Chin, a Malaysia expert from the University of Tasmania, said many Malays would find it hard to switch their allegiance.

“The rural Malays have been brainwashed since independence, so they will find it hard to abandon UMNO,” he said. – Rappler.com