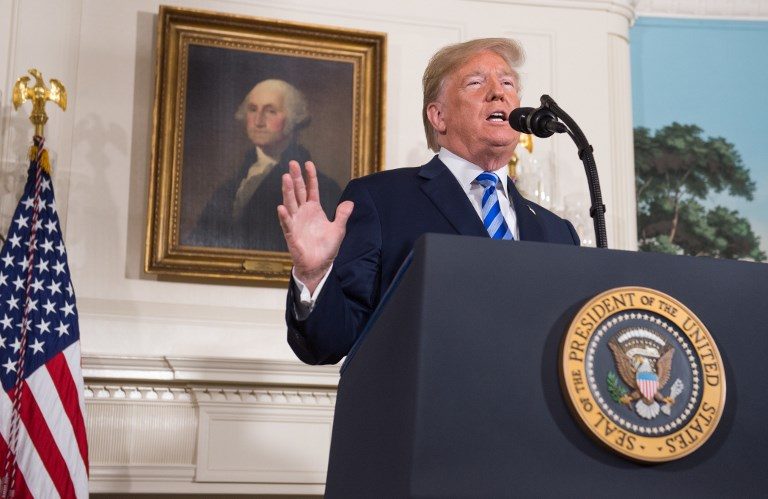 Facebook Twitter Copy URL
Copied
(UPDATED) Slapping aside more than a decade and a half of careful diplomacy by Britain, China, France, Germany, Iran, Russia and past US administrations, Trump calls for a 'new and lasting deal'

Trump poured scorn on the “disastrous” 2015 accord, describing it as an “embarrassment” to the United States that does nothing to contain Iran’s nuclear ambitions.

“I am announcing today that the United States will withdraw from the Iran nuclear deal,” Trump said in an address to the nation from the White House.

Slapping aside more than a decade and a half of careful diplomacy by Britain, China, France, Germany, Iran, Russia and past US administrations, Trump called for a “new and lasting deal.”

That grand bargain, he said, would have to include not just deeper restrictions on Iran’s nuclear program, but on its ballistic missiles and support for militant groups across the Middle East.

“We cannot prevent an Iranian nuclear bomb under the decaying and rotten structure of the current agreement,” he claimed.

“We will not allow American cities to be threatened with destruction and we will not allow a regime that chants ‘Death to America’ to gain access to the most deadly weapons on Earth.”

It remains far from clear if the international community, or Iran, will play along.

Iran’s President Hassan Rouhani – whose standing at home now risks being undermined by the deal’s collapse – was furious, accusing Trump of “psychological warfare”.

Trump’s onerous demands and his warning that Iranians deserve better than their current “dictatorship” will only heighten suspicions his ultimate goal is regime change.

“If the regime continues its nuclear aspirations, it will have bigger problems than it has ever had before,” he warned.

The decision marked a stark diplomatic defeat for Europe, whose leaders, repeatedly and in person, begged the mercurial US leader to think again.

In a joint statement, Germany’s Angela Merkel, Britain’s Theresa May and France’s Emmanuel Macron voiced their “regret and concern” at Trump’s decision.

European firms doing business in Iran now have a 6 month deadline to wind up investments, or risk US sanctions, Trump’s hawkish advisor John Bolton warned, while ruling out talk of reconsideration.

And Treasury Secretary Stephen Mnuchin made it clear that Washington was acting “under both our primary and secondary sanctions authorities,” meaning that European firms with investments or operations in the United States could be targeted if they continue to trade with Iran.

In a sign of the depth of European displeasure, plans are already being drawn up in Brussels to introduce measures blocking US sanctions, an extremely rare move against an allied government.

While Iran’s arch foes in Israel and Saudi Arabia welcomed Trump’s decision, signatories to the existing deal vowed to plow ahead without the United States.

The European Union’s chief diplomat Federica Mogherini, who helped oversee the accord, insisted it was “delivering on its goal which is guaranteeing that Iran doesn’t develop nuclear weapons.”

“The European Union is determined to preserve it,” she added.

Trump’s decision offers him a domestic political victory, fulfilling a longstanding campaign promise and underscoring his no nonsense political brand.

But the long term impact for American foreign policy and for the Middle East was less clear.

Former US president Barack Obama – whose administration inked the deal – made a rare public criticism of his successor, describing Trump’s decision to abandon the Iran nuclear deal as “misguided” and a “serious mistake.”

“The consistent flouting of agreements that our country is a party to risks eroding America’s credibility, and puts us at odds with the world’s major powers.”

In contrast, Israel’s Prime Minister Benjamin Netanyahu, who last week released a trove of intelligence on a pre-2003 Iranian plan to develop a nuclear weapon which Trump cited approvingly in his speech, was overjoyed.

Shortly after, Syrian state media reported 9 pro-government fighters were killed in an Israeli missile strike near Damascus, where Iranian proxies are known to operate.

Israel had already opened bomb shelters and put the military on high alert in case of attack from the Iranian forces deployed in Syria in defense of Bashar al-Assad’s regime. – Rappler.com