May 17, 2018 1:10 PM PHT
Agence France-Presse
Facebook Twitter Copy URL
Copied
The Church-mediated dialogue involves representatives of university students who are leading the protests against Nicaraguan President Daniel Ortega, as well as some from business groups and unions 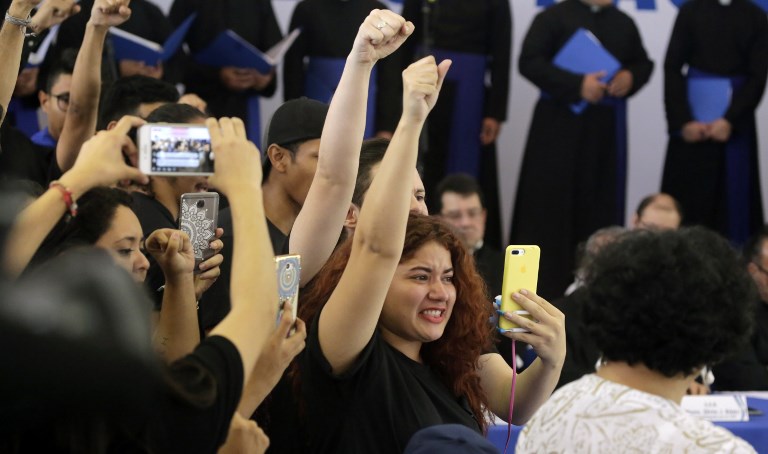 MANAGUA, Nicaragua – Nicaraguan President Daniel Ortega opened talks on Wednesday, May 16, with opposition groups in a bid to quell a month of anti-government unrest that has seen more than 50 people killed.

The Church-mediated dialogue, which got underway in the capital Managua, involved representatives of university students who are leading the protests against Ortega as well as some from business groups and unions.

Ortega told the room that the aim of the talks was to “get past this tragic moment” and restore “peace” to the country, one of Latin America’s poorest.

He was however interrupted by student representatives calling him a “murderer” and urging “an end to the repression.”

“We have come to demand you order the immediate halt of the attacks. You’re the boss of the paramilitaries, of the troops, of the mobs backing the government,” said a leader of the student coalition, Lester Aleman.

The unrest was the worst faced by Ortega in his past 11 years as president.

The protests were initially triggered by an aborted attempt to reform the near-bankrupt social security system, but quickly morphed into a street movement demanding Ortega’s ouster over a range of grievances.

Rights groups say at least 58 people were killed, the majority of them protesters.

Ortega said Nicaragua’s police now have orders to not open fire. He also said that “the deaths were on all sides,” not only that of the protesters.

Late Wednesday, foreign minister Denis Moncada announced an 11-strong delegation from the Inter-American Commission on Human Rights would arrive in Managua on Thursday, May 17, to observe the situation on the ground. The government had at first rejected such a mission while a parliament-created commission probed the deaths.

The 72-year-old leader, who previously ruled between 1979 and 1990, is a former leftist Sandinista guerrilla who helped overthrow the US-backed dictatorship of Anastasio Somoza, but who himself has become seen as dictatorial.

He has increasingly wielded power jointly with his wife Rosario Murillo, who is both his vice president and chief government spokesperson.

Murillo, who attended the talks alongside her husband, said “we came here in good faith” and urged all present “to think of Nicaragua.”

But student representatives in the room made clear that they want the president and Murillo to step down.

They also used the occasion to reject Ortega’s portrayal of many of those killed as criminals or vandals.

“They were students, not criminals,” they yelled.

The talks came one day after the most recent clashes between protesters and police, in the northern town of Matagalpa, which has long been under the sway of Ortega’s Sandinista Front party.

The town’s mayor, Sadrach Zeledon, said one person was killed by “right-wing vandalism groups,” referring to the demonstrators, who in turn said the victim, Wilber Reyes, was killed in attacks launched by police.

The Nicaraguan Association for Human Rights spokesman in the city, German Herrera, told local TV station 100% Noticias that 35 people were injured in the clashes on Tuesday, May 15, and at least 10 people had been arrested.

The same day in Masaya, 30 kilometers (20 miles) southeast of Managua, residents reported harsh repression by riot police, while in the capital, parents and students from private high schools marched to demand justice and freedom.

The US embassy in Nicaragua has suspended the processing of non-immigrant visas until further notice, citing the instability.

Ortega had accepted the notion of talks in the early days of the crackdown, but they were delayed for weeks. The Church deemed he had not fulfilled conditions under which they could be held – among them that a regional human rights group be allowed to visit.

Ortega made a series of other previous concessions after sharp domestic and international criticism over the use of security forces to put down the protests, and curbs on independent media to report them.

Business leaders, as well as the army, appear to have distanced themselves from Ortega as the protests, and the deadly crackdown, continued.

Frustrations have been voiced over corruption, the autocratic style of Ortega and Murillo, limited options to change the country’s politics in elections, and the president’s control over Congress, the courts, the military and the electoral authority.

One of the bishops, Abelardo Meta, said in Wednesday’s talks that the clerics had a demand of their own – “that the police be pulled back to their barracks.”

“A revolution without arms has started. Here, it’s not an army against an army – it’s a population that is unarmed,” he said. – Rappler.com