U.S., China back off on tariffs, easing trade tensions 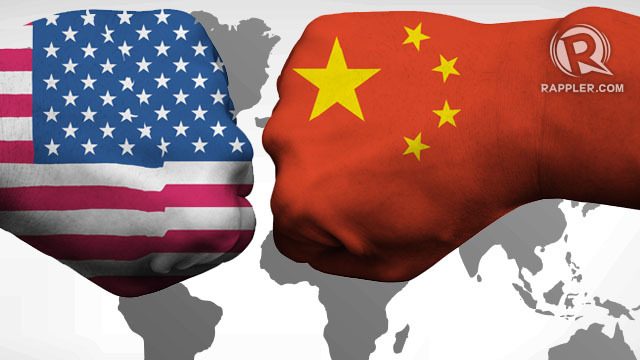 Facebook Twitter Copy URL
Copied
(UPDATED) 'The two sides reached a consensus, will not fight a trade war, and will stop increasing tariffs on each other,' says China's Vice Premier Liu He

BEIJING, China (3rd UPDATE) – US Treasury Secretary Steven Mnuchin confirmed Sunday, May 20, that Washington and Beijing have agreed to back off from imposing tariffs on each other, a day after reaching an accord on slashing the American trade deficit with China.

“We have made very meaningful progress and we agreed on a framework,” Mnuchin told Fox News Sunday. “So right now we have agreed to put the tariffs on hold while we try to execute the framework.”

China’s Vice Premier Liu He, who led a high-level delegation to the United States this week, meantime confirmed that “the two sides reached a consensus, will not fight a trade war, and will stop increasing tariffs on each other,” official Chinese news agency Xinhua reported.

The apparent detente between the two economic giants follows months of increasing tensions that have set markets on edge over fears of a damaging trade war.

The US-Chinese thaw raised concerns in some other countries still facing potential US tariffs, however, with France saying it could come “at the expense of Europe.”

Mnuchin emphasized Sunday that the sides had also discussed structural changes by Beijing “to make sure that we have a fair ability to compete” in its vast market.

As each side worked to set expectations, Liu cautioned that “unfreezing the ice cannot be done in a day” and that structural changes “will take time.”

Mnuchin added a caution of his own, emphasizing that if China did not respect its commitments, Trump could “always decide to put the tariffs back on.”

In the absence of an agreement, US levies on $50 billion of Chinese imports could have taken effect as early as next week. Tariffs on steel and aluminum were put in place in March.

Last year, the United States had a $375.2 billion trade deficit with China, and Washington reportedly had demanded the deficit be slashed by at least $200 billion by 2020.

Asked on Fox whether the agreement addressed the $200 billion demand, Mnuchin said, “We have specific targets” but that he would not disclose them publicly.

He said they were set “industry by industry.”

Trump’s threats of further tariffs had prompted Beijing to warn it would target US agricultural exports, aircraft, and even whiskey.

Against that fraught backdrop, teams led by Mnuchin and Liu met earlier this month in Beijing.

Both sides said further talks are planned to flesh out details.

“There was a consensus on taking effective measures to substantially reduce the United States trade deficit in goods with China,” Saturday’s joint statement said.

It added that “China will significantly increase purchases of United States goods and services.”

Mnuchin said there would be “a very big increase” in Chinese purchases of US agricultural supplies — by 35 percent to 45 percent this year — as well as a potential doubling of energy purchases.

And Liu said the new cooperation would extend to medical care, high-tech products and finance, according to Xinhua.

The two sides also agreed to strengthen cooperation on protecting intellectual property — a long-standing source of US discontent.

The trade issue is complicated by the impending summit meeting in Singapore between Trump and North Korean leader Kim Jong Un, who has consulted with Chinese leader Xi Jinping.

China is North Korea’s biggest trade partner, and Trump has called on it repeatedly to press Pyongyang to rein in its nuclear and missile programs.

Meantime, the effects of the new US-Chinese warming were being nervously assessed in other countries, with French Economy Minister Bruno Le Maire warning Sunday that it could exact a cost from Europe.

“The United States and China risk entering an agreement at the expense of Europe if Europe is not capable of showing a firm hand,” he told CNEWS television.

Trump earlier this month granted the EU, along with Canada and Mexico, only a 30-day reprieve from threatened steel and aluminum tariffs.

“The United States wants to make Europe and European countries pay for China’s bad behavior,” Le Maire said. “All of that is totally absurd and incomprehensible for allies.” – Rappler.com