WASHINGTON, USA (UPDATED) – US President Donald Trump informed Kim Jong Un Thursday, May 24,  he was canceling their nuclear summit next month in Singapore, blaming “anger” and “hostility” from the North Korean regime for the spectacular collapse of the historic event.

In a letter to Kim, Trump announced he was pulling out of the high-stakes meeting agreed for June 12, an unprecedented face-to-face between a US and North Korean leader aimed at ridding the reclusive state of nuclear weapons. 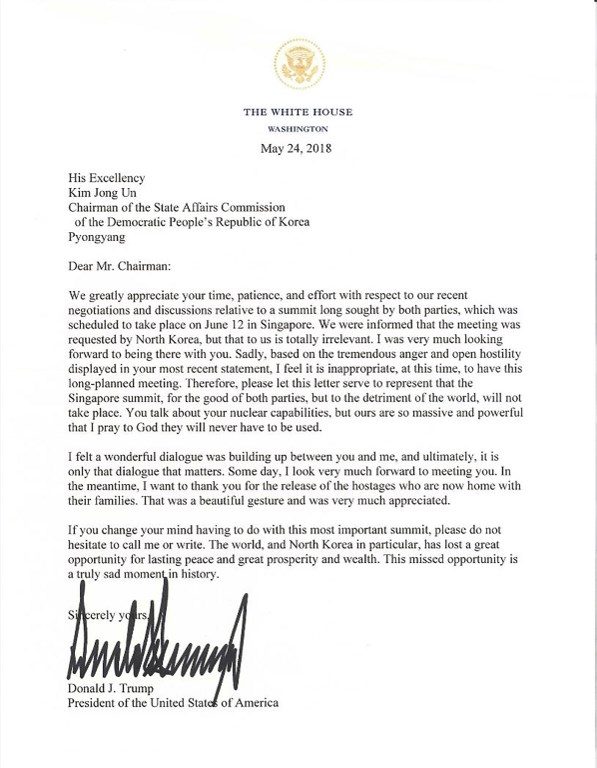 Trump’s decision was announced shortly after North Korea declared it had “completely” dismantled its nuclear test site, in a carefully choreographed move portrayed by the isolated regime as a goodwill gesture ahead of the summit.

But the meeting’s chances of success had recently been thrown into doubt on both sides, and Trump’s announcement came a day after North Korea hardened its rhetoric by attacking Vice President Mike Pence as “ignorant and stupid.”

“Sadly, based on the tremendous anger and open hostility displayed in your most recent statement, I feel it is inappropriate, at this time, to have this long-planned meeting,” read Trump’s letter, released by the White House.

“The world, and North Korea in particular, has lost a great opportunity for lasting peace and great prosperity and wealth. This missed opportunity is a truly sad moment in history,” he said.

The US leader brandished the threat of America’s nuclear might in his letter, writing: “You talk about your nuclear capabilities, but ours are so massive and powerful that I pray to God they will never have to be used.”

But his letter also appeared to leave the door open to a future meeting with Kim, stressing he had been “very much looking forward” to the event – on which he had pinned great hopes, openly entertaining the notion it could earn him him a Nobel Peace Prize.

“We greatly appreciate your time, patience, and effort with respect to our recent negotiations and discussions,” he told Kim.

“I felt a wonderful dialogue was building up between you and me, and ultimately, it is only that dialogue that matters,” Trump said.

“If you change your mind having to do with this most important summit, please do not hesitate to call me or write.”

Politically, Trump had invested heavily in the success of the planned summit, and privately most US officials, as well as outside observers, believed it would go ahead despite the recent uptick in tensions.

Trump had touted the talks as a golden opportunity for Pyongyang – telling Fox News in an interview recorded Wednesday, May 23, there was “a good chance” they would go ahead as planned.

Hand-picked US aides travelled to Singapore this week where they were expected to meet their North Korean counterparts and iron out details of the meeting.

But as the date drew nearer, the gulf in expectations between the two sides had come into sharp relief.

Washington has made it clear it wants to see the “complete, verifiable and irreversible denuclearization” of the North.

But Pyongyang has vowed it will never give up its nuclear deterrence until it feels safe from what it terms US aggression.

Speaking after Trump’s letter was released, Secretary of State Mike Pompeo – who twice travelled to Pyongyang to lay the groundwork for the summit – said it was scrapped because a “successful outcome” did not seem possible.

“Over the past many days, we have received no response to our inquiries from them,” Pompeo told US lawmakers.

He reiterated however that “there was a real understanding between us” after his latest meeting with Kim, and that the American team had been “rocking and ready and prepared for this meeting”.

UN Secretary-General Antonio Guterres said he was “deeply concerned” by news of the cancellation.

“I urge the parties to continue their dialogue to find a path to a peaceful and verifiable denuclearisation of the Korean peninsula,” he added while presenting a new disarmament agenda in Switzerland. – Rappler.com