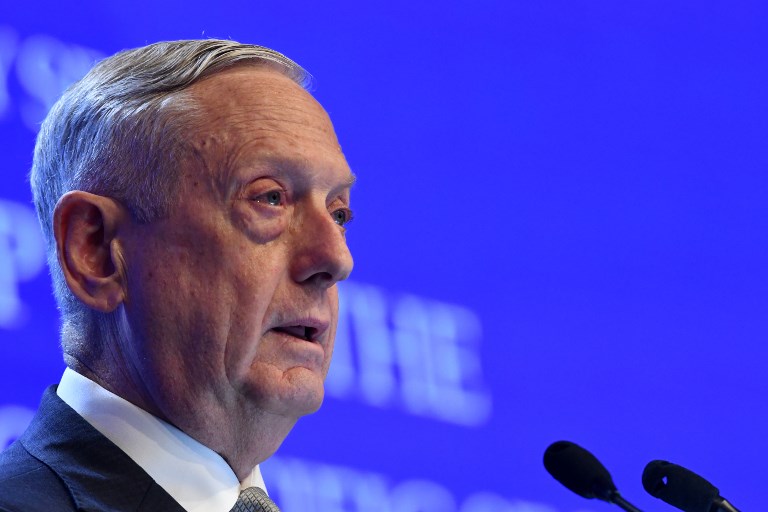 SINGAPORE (UPDATED) – China’s military build-up in the South China Sea and its deployment of high-end weapons systems in the disputed waterway is designed to intimidate and coerce neighbors, US Defense Secretary Jim Mattis said Saturday, June 2.

Speaking at a high-profile security summit in Singapore, the Pentagon chief also said the US military continues to support diplomats pushing for the “complete, verifiable and irreversible” denuclearization of the Korean peninsula.

Mattis said Beijing had deployed a range of military hardware including anti-ship missiles, surface-to-air missiles and electronic jammers across the South China Sea, where it has built islets and other maritime features into hardened military facilities.

Beijing has also landed heavy bombers on Woody Island in the Paracel Islands.

“Despite China’s claims to the contrary, the placement of these weapon systems is tied directly to military use for the purposes of intimidation and coercion,” Mattis told the Shangri-La Dialogue.

He also called out Chinese President Xi Jinping for reneging on a 2015 promise made at the White House that Beijing would not militarize the island features in the South China Sea.

Mattis’ address in Singapore was the second time he had attended the summit since becoming Pentagon chief.

He returned to a theme that he and other senior US officials have hammered since President Donald Trump took office – that America is here to stay in the Asia-Pacific region and that allies should stick with Washington instead of aligning with Beijing.

But the message of inclusivity, cooperation and working with allies might be a tougher sell for Mattis, who is generally popular on the international scene, after his boss this week imposed metals tariffs on some of America’s closest allies in the name of “national security”.

Washington Post columnist Josh Rogin asked Mattis whether he thought it was unproductive for Trump to pick fights with allies on trade.

“Certainly we have had some unusual approaches, I’ll be candid with you,” Mattis replied.

In a dig at China, which the Pentagon has accused of using “predatory” economics to exploit neighbors, Mattis said the US supports the peaceful resolution of disputes, “free, fair and reciprocal trade and investment” and adherence to international rules and norms.

Despite frequent warnings from Washington about China’s rising might and the pitfalls of its “Belt and Road” global infrastructure initiative, Beijing has faced few consequences for its South China Sea build-up and sweeping territorial claims.

One modest exception came last week when the Pentagon disinvited China from biennial maritime exercises in the Pacific. Mattis characterized this action as an “initial response”.

But “there are much larger consequences in the future when nations lose the rapport of their neighbors,” he warned.

“They believe that piling mountainous debts on their neighbors and somehow removing the freedom of political action is the way to engage them. Eventually these things do not pay off.”

Delegates hoping for clarity on Trump’s intentions for a scheduled June 12 summit with North Korean leader Kim did not get much from Mattis, though he said the issue of the permanent deployment of about 28,5000 US troops in South Korea will not be “on the table”.

Mattis has tried to avoid weighing in on the summit, deferring questions to the State Department and Trump’s national security team.

“On the Korean peninsula, we hold the line with our allies, supporting our diplomats who lead this effort,” Mattis said.

“Our objective remains the complete, verifiable, and irreversible denuclearization of the Korean peninsula.” – Rappler.com