Jun 7, 2018 10:39 AM PHT
Agence France-Presse
Facebook Twitter Copy URL
Copied
Only 28 of the 99 people killed as a result of the eruption have been identified so far 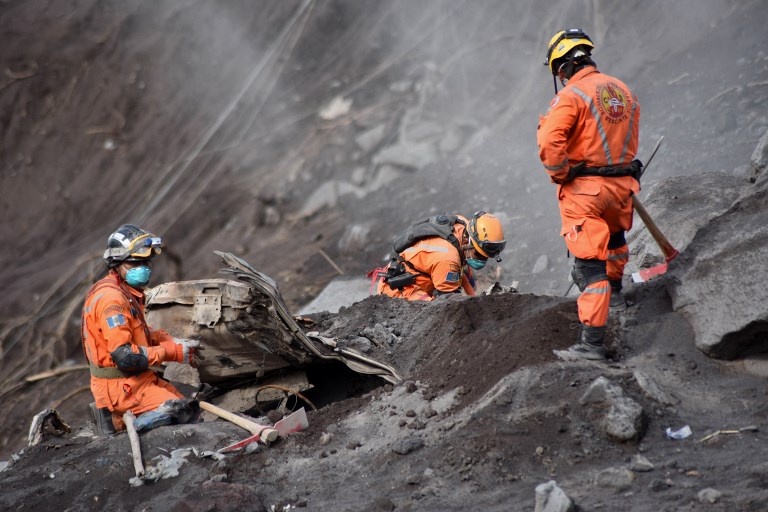 ESCUINTLA, Guatemala – Explosions boomed from Guatemala’s fearsome Fuego volcano Wednesday, June 6, unleashing fresh torrents of mud and ash down slopes, as the death toll from a previous eruption rose to at least 99.

Fears of a new blowup of the 3,763-meter (12,346-foot) volcano have stalked rescue workers since the eruption on Sunday, June 3, buried entire villages on its southern flank.

The National Forensic Sciences Agency said in a report Wednesday that morgues had received the remains of 99 people killed as a result of the eruption.

Only 28 have been identified so far, it said.

“We already have data with names and locations where there are missing persons and that number is 192,” Sergio Cabanas, head of Guatemala’s disaster management agency, told reporters earlier in the day.

Experts warned Wednesday that heavy rains in the area could provoke avalanches due to the large flows of volcanic mud, known as lahars, since the eruption on Sunday.

“The explosions are generating moderate avalanches that have an approximate distance of 800 to 1,000 meters,” the Volcanology Institute said.

It said the lahars could sweep down the mountain laden with concrete, rocks up to a meter (yard) in diameter and tree trunks.

“The activity continues and the possibility of new pyroclastic flows in the next hours or days cannot be ruled out, so it is recommended not to remain near the affected area,” it said.

Emergency workers had to temporarily suspend their search late Tuesday, June 5, after a new eruption triggered a landslide.

Hundreds of people were evacuated from 7 communities in the Escuintla area near the summit, as panicked locals rushed to their cars to escape, causing chaotic traffic.

An Agence France-Presse photographer saw a large plume of ash rise into the sky, prompting an evacuation of everyone authorities could find before the police, the military and rescuers were ordered to stand down.

Hundreds of rescue workers, including firefighters, police and the military, were battling adverse conditions to search for remains in the tangled morass of rubble, dust and earth left behind by the landslides.

General Walter Sanchez, in charge of operations around the epicenter of the destruction near the village of El Rodeo, said the heat from the ash and hot sediment made rescue work difficult.

Firefighters hosed down their smoking boots, which had sunk into molten volcanic material just below the ash surface.

Everything in the search area was covered in a thick blanket of dust. In the murk created by the dust, police were using red ink to mark homes that had already been searched for bodies.

More than 12,000 people have been evacuated from their homes, the disaster management agency said, with over 3,000 of them housed in temporary shelters.

On the slopes Wednesday, local volunteers distributed food to rescue workers, and columns of cars handed out food, water, toilet paper, diapers and other necessities to residents.

Some residents said they had organized themselves to prevent looting that they claimed occurred on the first night of the disaster.

The killer eruption was the Central American country’s strongest in 4 decades.

It sent huge clouds of ash barreling over the surrounding area, blanketing roads, cars and people in thick gray dust as a river of molten mud carved a path down the mountain, sweeping away entire villages.

Officials said the speed and ferocity of the eruption took mountain communities by surprise, with many of the dead found in or around their homes.

Despite offers of international help from the United States, Mexico and several Latin American neighbors, Guatemalan authorities have not made a request for foreign aid.

“We are ready when CONRED, as the governing body of emergency management, authorize us to make an appeal,” the ministry said in a statement.

President Jimmy Morales has been criticized on social media for passively waiting to react to offers of international aid.

The head of the International Red Cross Francesco Rocca is due to visit the country on Thursday, June 7, the Geneva-based agency said.

Meanwhile, the US Air Force was to “transport 6 Guatemalan children injured by the recent eruption” for treatment in Texas on Wednesday, the American military said. – Rappler.com