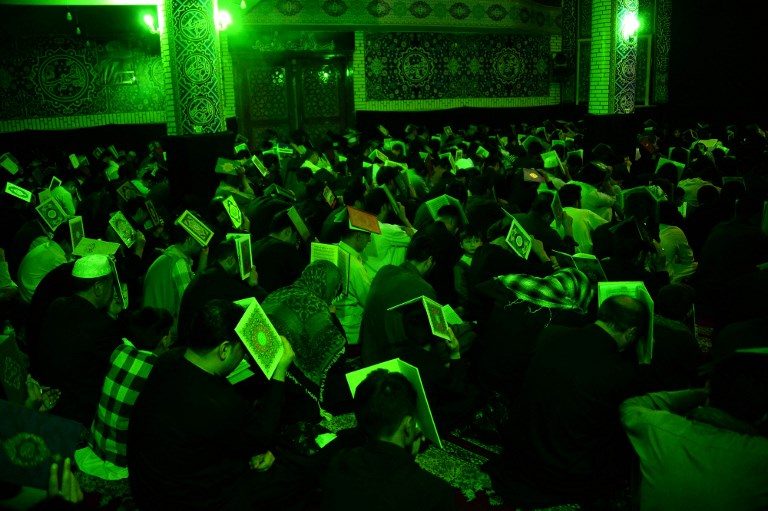 Facebook Twitter Copy URL
Copied
The ceasefire will last 'from the 27th of Ramadan until the fifth day of Eid-al-Fitr,' Afghanistan President Ashraf Ghani tweeted from an official account, indicating it could run from June 12-19

KABUL, Afghanistan – Afghanistan announced Thursday, June 7, a week-long ceasefire with the Taliban for Eid, the holiday that caps off Ramadan, though operations against other groups including Islamic State will continue.

The ceasefire will last “from the 27th of Ramadan until the fifth day of Eid-al-Fitr,” President Ashraf Ghani tweeted from an official account, indicating it could run from June 12-19.

It was not immediately clear if the Taliban had agreed to the ceasefire, which would be the first for Eid since the US invasion in 2001.

“We are checking with our officials regarding the ceasefire announcement,” Taliban spokesman Zabihullah Mujahid told AFP.

The surprise move comes days after a gathering of Afghanistan’s top clerics in the capital Kabul called for a ceasefire and issued a fatwa against suicide bombings and attacks.

An hour after the fatwa was issued, a suicide bomber detonated outside the gathering, killing seven people.

“The government of Afghanistan not only supports the unanimous fatwa announcement by the ulemas (scholars), but also backs the recommended ceasefire,” he said in a statement released by his office.

“(At) the same time, the Afghan government directs all the security and defense forces of the country… to stop all the attacks on the Taliban, but the operation will continue against Daesh (Islamic State), Al-Qaeda and other international terrorist networks.”

In February Ghani unveiled a plan to open peace talks with the Taliban, including eventually recognizing them as a political party. At the time he also called for a ceasefire.

The insurgents did not officially respond, but announced the launch of their annual spring offensive in an apparent rejection of the plan, one of the most comprehensive ever offered by the Afghan government.

Last month, the Pentagon said that senior Taliban officials have been secretly negotiating with Afghan officials on a possible ceasefire.

“A lot of the diplomatic activity and dialogue is occurring off the stage, and it’s occurring at multiple levels,” General John Nicholson said in a teleconference with reporters at the Pentagon.

He would not identify the figures involved in the negotiations, except to say that they included mid- and senior-level Taliban officials.

A ceasefire would bring welcome relief to civilians in the war-torn country, nearly 17 years after the Taliban regime was toppled.

In recent years the resurgent militant group, along with the Islamic State group, have stepped up their attacks on Kabul in particular, making it the deadliest place in the country for civilians.

Fearful residents have limited their movements and Eid celebrations in the capital are set to be muted, unlike in other parts of the Muslim world. – Rappler.com