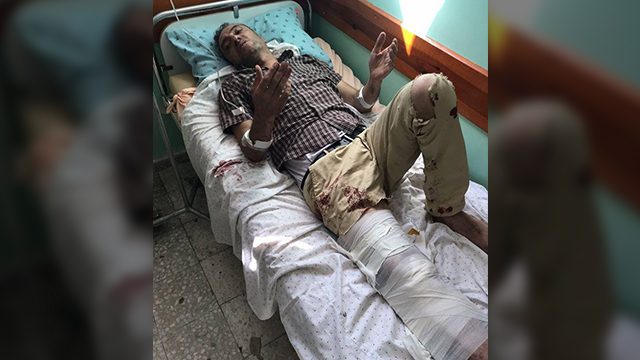 Facebook Twitter Copy URL
Copied
Mohammed Abed al-Baba, who has worked for Agence France-Presse in Gaza since 2000, says he was shot in the leg while wearing a clearly identified press vest and helmet

GAZA CITY, Palestinian Territories – An Agence France-Presse (AFP) photographer was shot in the leg as Israeli troops opened fire on Palestinian demonstrators along the Gaza border on Friday, June 8, the health ministry and the journalist said.

Mohammed Abed al-Baba, who has worked for AFP in Gaza since 2000, said he was shot in the leg while wearing a clearly identified press vest and helmet around 200 meters (yards) from the border east of Jabalia in northern Gaza.

The bullet hit him below the knee, with his condition not life threatening, medics said.

Three Palestinians, among them a 15-year-old, were killed by Israeli fire elsewhere along the border as thousands demonstrated, the health ministry added.

The Israeli army said it was dealing with a riot.

Minor clashes were underway east of Jabalia when Abed was shot and he said he was trying to photograph a wounded protester.

He was taken to the Al-Awda Hospital in northern Gaza for treatment, where a doctor said he would undergo surgery to stabilize a bone.

The Israeli army did not immediately respond to a request for comment about Abed.

It has accused Gaza’s Islamist rulers Hamas of manipulating the protests to conceal the infiltration of militants planning attacks.

Abed has been working for AFP in Gaza since 2000, covering 3 wars between Israel and Hamas.

He has won multiple awards.

Since widespread protests broke out along the Gaza border on March 30, Baba has been covering them daily – with his photos widely used across the globe.

At least 128 Palestinians have been killed since the protests began on March 30. No Israelis have died.– Rappler.com