Nukes and normalization: What’s on the table in Singapore 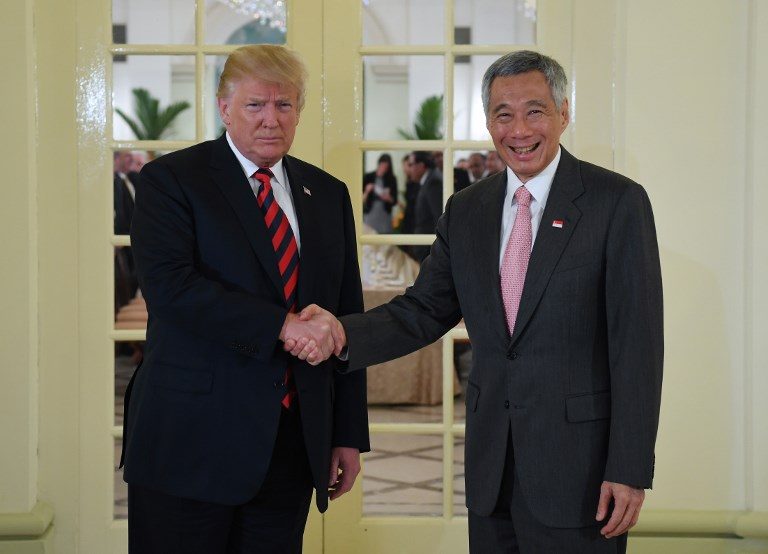 Facebook Twitter Copy URL
Copied
From Kim's nuclear arsenal to normalising ties between the two decades-old foes, these are the issues facing the two leaders at what Trump has called a "one-time shot" at peace

SINGAPORE – US President Donald Trump and North Korean leader Kim Jong Un will sit down on Tuesday, June 12, for an unprecedented summit that has raised hopes of progress on the troubled Korean peninsula.

From Kim’s nuclear arsenal to normalising ties between the two decades-old foes, these are the issues facing the two leaders at what Trump has called a “one-time shot” at peace.

This is the absolute crux of the summit and there remains a chasm between the two sides that diplomats were scrambling to close on the eve of the meeting.

Washington is demanding the complete, verifiable and irreversible denuclearization (CVID) of North Korea. In Trump’s words: “They have to de-nuke. If they don’t denuclearise, that will not be acceptable.”

North Korea has repeatedly expressed a commitment to the “denuclearization of the Korean peninsula” – notably in a report by state agency KCNA on the eve of the summit – but the term is open to interpretation on both sides and it remains unclear what concessions Kim is prepared to offer.

South Korea estimates the North has 50 kilograms of plutonium, reportedly enough for around 10 bombs, and a “considerable” ability to produce uranium weapons.

Previous agreements with the North have subsequently collapsed and experts warn Kim is highly unlikely to give up the “treasured sword” of his nuclear deterrent.

Dismantling a secret nuclear arsenal built up over decades would take several years and be extremely difficult to check, they say.

Siegfried Hecker, a noted US nuclear expert, said the immediate CVID of the North was “unimaginable” and “tantamount to a North Korean surrender scenario”.

North and South Korea remain technically at war after the 1950-53 conflict ended in an armistice that Seoul’s then leader refused to sign and divided the peninsula along the Demilitarized Zone.

At their summit in April Kim and South Korean President Moon Jae-in agreed to seek a peace treaty and Trump mused earlier this month: “Can you believe we’re talking about the ending of the Korean War?”

Seoul announced last week it was in 3-way talks with Pyongyang and Washington for an “early” declaration that the war is over.

That could precede a full treaty which would raise complex issues needing extensive negotiation, and would need to involve China, which backed the North during the conflict and is a signatory to the armistice.

But Trump said: “We could absolutely sign an agreement and we’re looking at it,” adding: “Sounds a little bit strange, but that’s probably the easy part.”

Ahead of the meeting, Trump has dangled the carrot of a normalisation of diplomatic ties between the former foes and even a White House visit for Kim, which would confirm his arrival on the world stage.

“Maybe we’ll start with the White House, what do you think?” he said when asked if Kim would be invited to Washington or his Mar-a-Lago estate in Florida.

The other carrot for Kim is a possible loosening of punishing UN Security Council sanctions but here too there is discord, with Washington saying sanctions can end only when denuclearisation is complete and Pyongyang wanting “phased” relief as they make progress towards that goal.

Another question is whether Trump will take up the issue of human rights – with North Korea accused of a host of state-sanctioned rights abuse including extrajudicial killing, torture and kidnapping.

North Korea is estimated to have up to 120,000 political prisoners in its sprawling gulag system.

Close US ally Japan has urged Trump to bring up the decades-old issue of its citizens abducted in 1970s and 1980s to train Pyongyang’s spies in Japanese language and customs.

Brad Adams, Asia director at Human Rights Watch, said it was imperative that Trump bring up rights issues with Kim.

“North Korea’s increased dialogue with other countries is a positive step, but before the world gets too excited they should remember that Kim Jong Un still presides over perhaps the most repressive system in the world,” he said.

Kim’s main concern is the survival of his own regime – South Korean President Moon Jae-in told reporters that the Pyongyang leader had “concerns on whether he could trust that the US would end its hostile policy and guarantee the security of his regime when the North denuclearizes itself”.

So the summit was nearly derailed by talk from Trump’s hawkish National Security Advisor John Bolton of a “Libya model” of disarmament.

Libyan leader Moamer Kadhafi was deposed and killed in a Western-backed rebellion after abandoning his nuclear programme.

The Trump administration has promised not to seek to bring about regime change and US Secretary of State Mike Pompeo has even floated the possibility of issuing security guarantees to the North.

But some question why Kim should trust any guarantees given Trump’s history of pulling out of accords — most recently the painstakingly negotiated Iran nuclear deal.

“Why would Kim… believe any commitments President Trump makes when he arbitrarily tears up an agreement with which the other party is complying?” said Antony Blinken, who was deputy secretary of state under Barack Obama. – Rappler.com