Jun 13, 2018 7:29 AM PHT
Agence France-Presse
Facebook Twitter Copy URL
Copied
Here are some of the main reactions so far 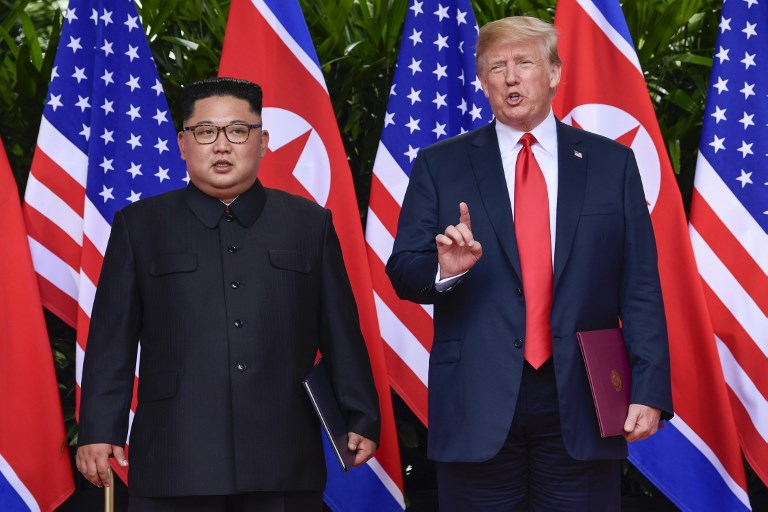 Most cautioned that the summit in Singapore was only the first step in a long journey to full denuclearization of the the Democratic People’s Republic of Korea, or DPRK, as North Korea calls itself. (READ: 6 things we learned from historic Trump-Kim summit)

Here are some of the main reactions  so far:

In Beijing, which is Pyongyang’s sole major ally and main trading partner, Chinese Foreign Minister Wang Yi said the fact that the two leaders “can sit together and have equal talks has important and positive meaning, and is creating a new history.”

“Resolving the nuclear issue, on the one hand of course is denuclearization, full denuclearization. At the same time, there needs to be a peace mechanism for the peninsula, to resolve North Korea’s reasonable security concerns,” Wang said.

Russian Foreign Minister Sergei Lavrov said that while “we have not yet seen the documents… the mere fact that this meeting took place is of course positive.”

EU diplomatic chief Federica Mogherini praised the summit as a “crucial and necessary step to build upon the positive developments achieved in inter-Korean relations and on the peninsula so far.”

The aim of the international community remained “the complete, verifiable and irreversible denuclearization of the Korean Peninsula”, she said. “The joint statement signed by the US and DPRK leaders today gives a clear signal that this goal can be achieved.”

British Foreign Minister Boris Johnson said in tweet that the talks had been “constructive” and “DPRK’s commitment to complete denuclearization of the Korean Peninsula is an important first step towards a stable and prosperous future.”

Yukiya Amano, the head of the UN’s International Atomic Energy Agency, welcomed the “DPRK’s commitment towards complete denuclearization of the Korean Peninsula.”

“The IAEA stands ready to undertake any verification activities in the DPRK that it may be requested to conduct by the countries concerned,” Amano added.

Norway’s foreign minister Ine Eriksen Soreide said that notwithstanding the “fundamentally positive” step the summit represented, it was now “that the largest part of the work actually begins.”

Jacek Sasin, aide to Prime Minister Mateusz Morawiecki, said that “if as a result of the meeting, North Korea will abandon its nuclear aspirations and no longer threatens to launch an attack, it’s very good.”

President Andrzej Duda’s chief of staff, Krzysztof Szczerski, hailed the summit as “spectacular” and a “triumph of diplomacy”. – Rappler.com