Guatemala volcano search called off with nearly 200 unaccounted for

Jun 18, 2018 3:28 PM PHT
Agence France-Presse
Facebook Twitter Copy URL
Copied
Officials have confirmed the deaths of 110 people as a result of the volcanic eruption on June 3, but another 197 remain unaccounted for 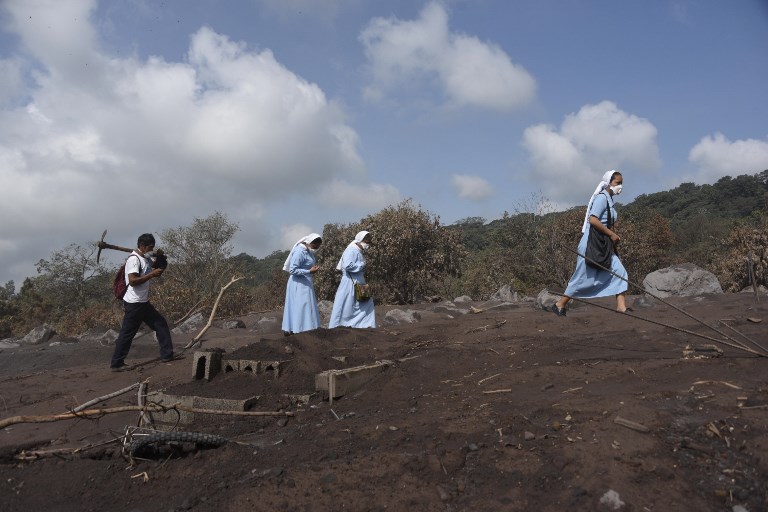 Officials have confirmed the deaths of 110 people as a result of the volcanic eruption on June 3, but another 197 remain unaccounted for.

A spokesman for the government’s civil protection agency, David de Leon, said the agencies involved decided to end the search “due to the fact that the area is uninhabitable and of high risk.”

The volcano, 35 kilometers (about 22 miles) southwest of the capital, is still generating four or five weak explosions an hour, sending a column of gray ash more than 3,000 feet (1,000 meters) into the sky.

Guatemala’s south-central region was also shaken on Sunday night by a 5.8-magnitude earthquake with its epicenter at Iztapa, on the Pacific coast near neighboring El Salvador, the civil protection agency said.

There were no reports of injuries or damage.

Additionally, rains were forecast for Sunday, posing a danger of volcanic mudflows.

More than 3,600 villagers have been forced to take temporary refuge in schools and community halls.

The suspended search had been focused on the hardest-hit communities of San Miguel Los Lotes and El Recreo.

The only exception to the suspension is in the area of Alotenango, where volunteer firefighters continued to search for two colleagues who went missing on the day of the disaster. – Rappler.com