Jun 24, 2018 9:00 AM PHT
Agence France-Presse
Facebook Twitter Copy URL
Copied
'They wanted to be stronger than the state in order to blackmail civilians,' says Iraqi Prime Minister Haider al-Abadi. 'This we will not allow.' 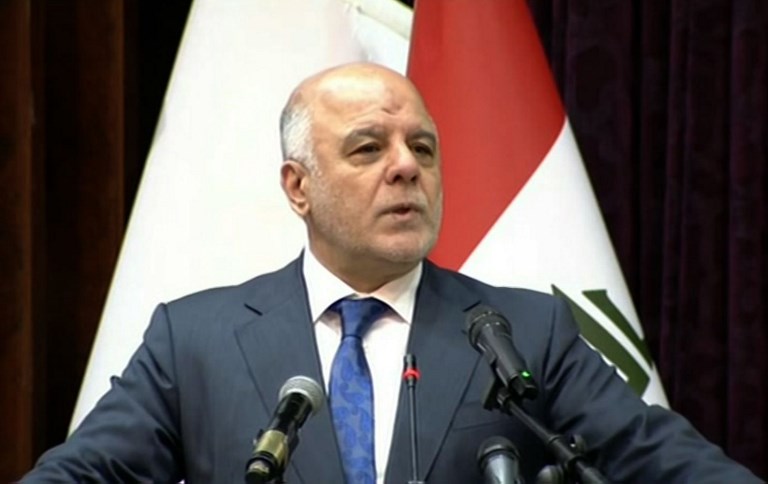 BAGHDAD, Iraq – Iraqi Prime Minister Haider al-Abadi warned on Saturday, June 23, he would not allow militias to stockpile arms, two weeks after a weapons depot belonging to an armed group exploded in Baghdad.

At least 16 people were killed and around 30 injured when the cache, owned by a group close to populist cleric Moqtada Sadr, blew up in his stronghold of Sadr City on June 7.

“There are groups who have taken advantage of the war against (the Islamic State group) to stock up weapons in order to threaten the state,” Abadi said at a conference at Baghdad’s Defense University for Military Studies.

“They wanted to be stronger than the state in order to blackmail civilians,” he said. “This we will not allow.”

After the June 7 blast, an anonymous police source said it had been caused by heavy weapons, including rocket-propelled grenades and shells stored in a house.

They reportedly belonged to the Sadr-linked Sarayat al-Salam (the Peace Brigades).

The militia was part of the Hashed al-Shaabi paramilitary force which played a key role in the fight against the Islamic State group in Iraq, in which Abadi declared victory in December.

Sadr is a nationalist whose bloc won the largest share of seats in Iraq’s May legislative elections. Abadi’s list came in 3rd. – Rappler.com