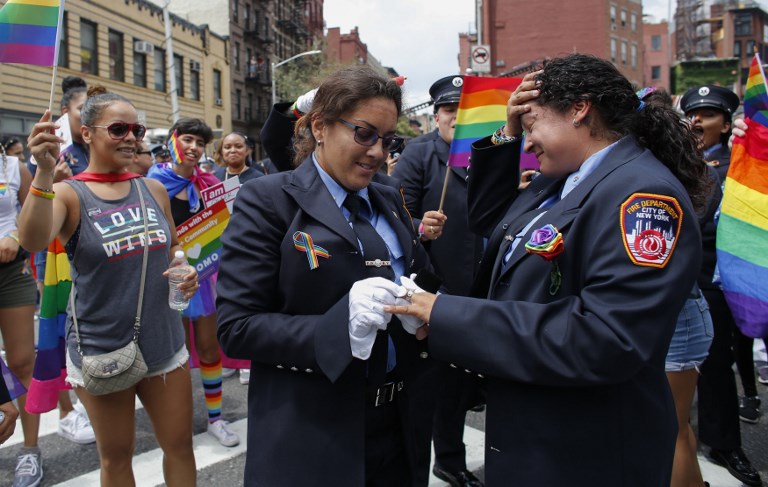 NEW YORK, USA – Tens of thousands of people waving rainbow flags and hoisting political banners marched and danced on the streets of New York on Sunday, June 24, in the latest festive edition of the Gay Pride parade that began in Central Park in 1970.

On foot, on roller skates, on motorbikes or riding on some 100 spectacularly colorful floats, participants moved slowly on a hot, sunny day along the 3-kilometer parade route from historic Stonewall Inn in Greenwich Village, over to Fifth Avenue, then up to 29th Street.

The route was altered this year in anticipation of the celebrations planned for next year to mark the 50th anniversary of the Stonewall riots between gay nightclub patrons and police that, in 1969, gave birth to the US movement for gay rights.

Many of Sunday’s marchers were scantily dressed, like one clad only in a bikini with a rainbow-colored bottom and a pink top. 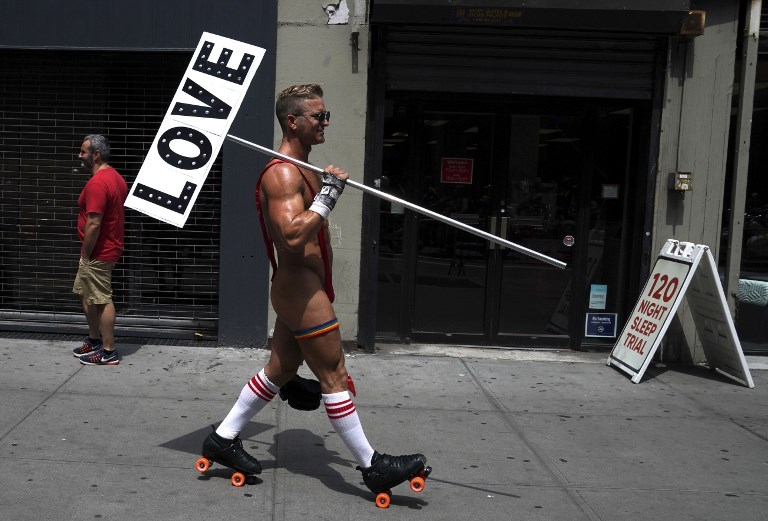 The theme of this year’s parade was “Defiantly Different,” a message inspired in reaction to President Donald Trump’s treatment of the LGBTQ community, organizers said.

For flamboyant Democratic New York Council member Corey Johnson, who at 36 is openly gay and is the city’s first legislative leader with HIV, the slogan reflects New York’s diversity: It has the nation’s largest LGBTQ community, a population more than 40 percent foreign-born and where “more than 200 languages are spoken” just in the borough of Queens.

“As Lady Gaga says, ‘I was born this way,'” he told the local ABC subsidiary, before returning to the parade, dancing and jumping with a rainbow banner streaming from his hand.

In a heavily Democratic city where gay voters matter, Johnson was not the only politician taking part: Also marching were Mayor Bill de Blasio, US Senator Chuck Schumer and New York Governor Andrew Cuomo, who walked behind a big banner reading “New York State of Love.”

The parade’s grand marshal this year was tennis legend Billie Jean King, 74, a lesbian and an outspoken defender of gender equality and LGBTQ rights, who rode in a carriage under a big, rainbow-colored parasol.

The atmosphere in this year’s parade was much lighter than last year, when many marchers paid somber tribute to the 49 people killed in a mass shooting at a gay nightclub in Orlando, Florida. – Rappler.com