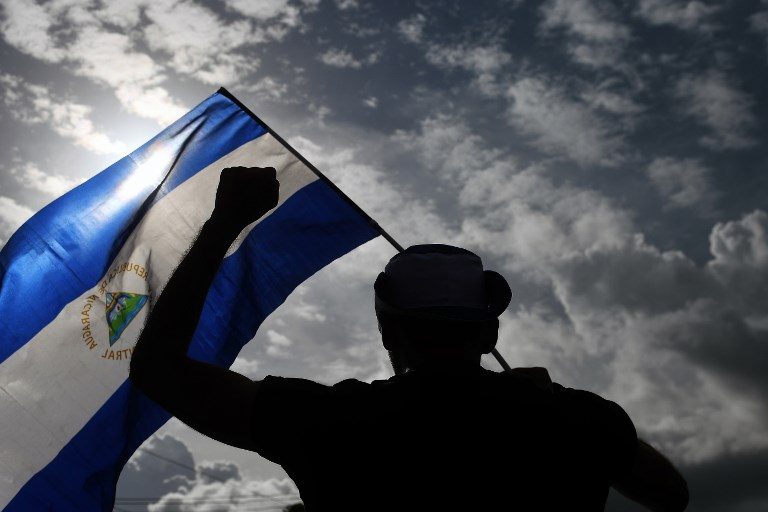 MANAGUA, Nicaragua – The Nicaraguan government and opposition, which is demanding the resignation of President Daniel Ortega, resumed talks Monday, June 25, aimed at ending two months of unrest that has left more than 200 people dead.

Nicaragua’s influential Catholic bishops, who are mediating the talks, said delegates from both sides were evaluating a proposal to organize new elections for March 2019 rather than at the end of 2021 as scheduled.

Meanwhile, shootings were reported in the northern departments of Leon and Managua, where armed men tore down barricades erected by residents.

“There were very strong detonations. This is really a mistake, repression is useless, we call on the authorities to stop it, we do not want more deaths,” said local priest Victor Morales by phone from Leon.

A police officer was killed Monday while dismantling barricades in Nagarote, a town 40 kilometers (25 miles) northwest of the capital, police said.

They said the officer was killed when government forces “were assaulted by criminal groups with weapons and mortars.”

Nagarote was turned into a ghost-town after riot police and pro-government paramilitaries moved into the town in numbers early Monday to dislodge protesters and tear down barricades. Shops and offices remained shut and people were sheltering in their homes, Agence France-Presse reporters said.

Talks between the government and the opposition Civic Alliance were suspended a week ago when the government failed to allow international human rights bodies to investigate the violence that has rocked the country. It eventually did so on Wednesday, June 27.

“We need a road map, a point of reference,” said Cardinal Leopoldo Brenes, the archbishop of Managua, who is helping with the talks. “On the question of democratization, if we are talking about elections… the president must let us know if he agrees,” he said.

The proposal was passed on by the Church on June 7 but Ortega, a 72-year-old former guerrilla leader who is on his 3rd consecutive term in office since coming to power in 2007, and having previously ruled from 1979-1990, asked for time to consider it. Since then, he has made no public announcement on the issue.

More than 200 people have been killed in two months of street protests as opposition groups demand Ortega step down.

The latest deaths at the weekend included a baby shot in the head as police and pro-government paramilitary groups carried out operations in Managua. Two students were also killed on the campus of the National Autonomous University of Nicaragua (UNAN), where dozens of students have holed up.

“The bishops of Nicaragua are waiting for President Ortega to formally inform us of his acceptance of the proposal we made to him….about early elections,” Managua’s auxiliary bishop Silvio Baez said in a Twitter message. He said the bishops’ proposal reflected the “feelings of many Nicaraguans.”

The protests began in April as demonstrations against now-scrapped social security reforms, but a heavy-handed police reaction transformed them into demands for justice for those killed, and for the exit of Ortega and his wife Vice President Rosario Murillo.

“Now our fight is for everything. We want a change of government,” said an 25-year-old student at a barricade in front of UNAN, his face hidden by a bandana.

Ortega has said he is willing to democratize the country via a separation of powers, which are currently all in the hands of his government, including the national electoral committee.

He has discussed the reforms with the Organization of American States (OAS), but the opposition wants him to go further.

“For the Civic Alliance, the election agreements between the OAS and the government are no longer valid. Ortega must say if he accepts early elections,” said Carlos Tunnerman, a former ambassador to the United States and member of the opposition. – Rappler.com