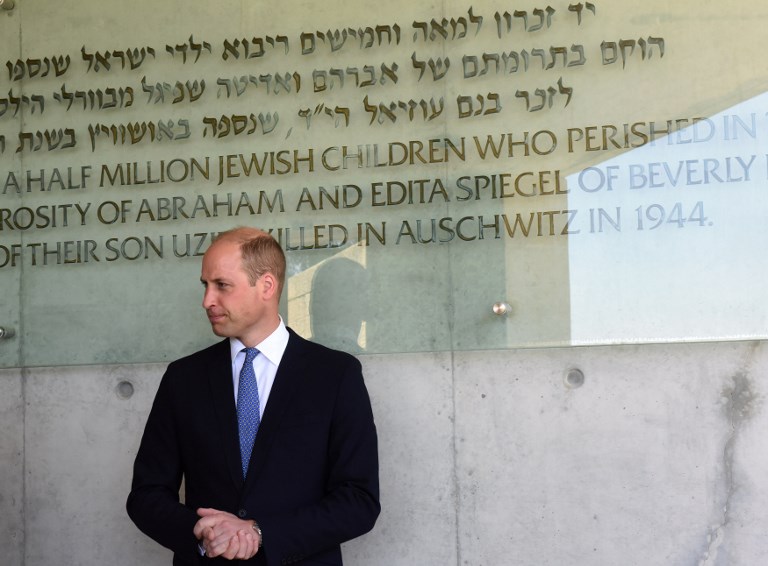 JERUSALEM, Undefined – Prince William honored Holocaust victims and met Israeli leaders Tuesday, June 26, as he began the first official visit by a British royal to both Israel and the Palestinian territories, at a time of heightened tensions.

The second in line to the British throne, wearing a black skullcap, rekindled the eternal flame and laid a wreath at Israel’s Holocaust memorial Yad Vashem as a youth choir sang.

The 36-year-old prince also toured the museum at the site perched on a forested hillside in west Jerusalem as part of a Middle East tour that first took him to Jordan.

His visit comes at a particularly sensitive time after US President Donald Trump recognized Jerusalem as capital of Israel, outraging Palestinians and sparking deadly clashes on the border with Gaza.

Britain governed the region under a League of Nations mandate for almost three decades until Israel’s independence 70 years ago, and is still blamed by both sides for sowing the seeds of the ongoing conflict.

William met with two Holocaust survivors, Paul Alexander and Henry Foner, who as children had escaped from Nazi Germany to Britain as part of the “Kindertransport” program.

While in Jerusalem, William will also visit the grave of his great grandmother, Princess Alice, who was honored by Yad Vashem in 1993 for sheltering Jews in Greece from the Nazis during World War II.

Prince William later headed for talks with Israeli leaders. He met Prime Minister Benjamin Netanyahu and his wife Sara and was also due to see President Reuven Rivlin.

Officials stressed the visit of the future king was non-political and focused on building relations with young people.

Yet he is likely to rub up against the complicated realities of the Israeli-Palestinian conflict, particularly while visiting the disputed holy city of Jerusalem.

‘Not a political visit’

William arrived in Israel from Jordan on Monday evening without his wife Kate, the Duchess of Cambridge, who gave birth to their third child two months ago.

He overnighted in Jerusalem at the King David Hotel, former headquarters of the British administration during the mandate in Palestine before the creation of the State of Israel in 1948.

On Wednesday he is scheduled to meet Palestinian president Mahmud Abbas in the occupied West Bank city of Ramallah, before meeting Palestinian refugees and young people.

On Thursday, he is to complete his stay by visiting historical and religious sites in Jerusalem.

“We know this is not a time when we can celebrate progress in the Middle East peace progress, but we believe that engagement is just as important in challenging times as it is in good times,” Philip Hall, Britain’s consul general in Jerusalem, told journalists on Monday.

“We know some of the politics are difficult, but this is not a political visit.”

Israel defines Jerusalem as its “eternal and indivisible” capital, while the Palestinians see east Jerusalem as the capital of their future state.

Trump’s decision in December to recognize Jerusalem as Israel’s capital sparked Arab outrage, and the May inauguration of the US embassy in the city coincided with bloody border protests in the Gaza Strip.

Some right-wing Israeli politicians have criticized the fact William’s visit to east Jerusalem is being organized by the British consulate, which deals with the Palestinians.

Hall said they were following “decades” of rulings in the United Nations that declare east Jerusalem, including the Old City, part of the occupied Palestinian territories.

“There is no change in the position.”

Israel seized the West Bank and east Jerusalem from Jordan in the 1967 Six-Day War.

Official visits by British royals are organized at the request of the UK government.

Other members of William’s family – including his father Prince Charles – have made unofficial visits to Israel and east Jerusalem in the past. – Rappler.com