Jun 26, 2018 11:41 PM PHT
Agence France-Presse
Facebook Twitter Copy URL
Copied
The vessel Lifeline had rescued the 234 migrants, including children and pregnant women, but Malta and Italy initially refused to take it in 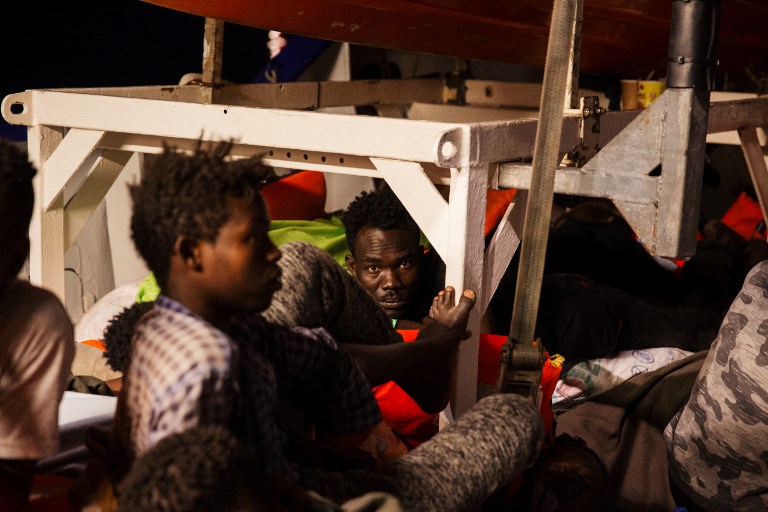 VALLETTA, Malta – Malta said Tuesday, June 26,  it would only allow a stranded rescue ship carrying over 200 migrants to dock in its port if other EU states agreed to take in some of those onboard.

The fate of the Lifeline ship, run by a German NGO, hung in the balance as EU states remained at loggerheads over how to handle the influx of people trying to reach the continent.

The vessel had rescued the 234 migrants, including children and pregnant women, on Thursday but Malta and Italy initially refused to take it in.

“I just got off the phone with (Maltese) Prime Minister (Joseph) Muscat: the NGO ship Lifeline will dock in Malta,” Prime Minister Giuseppe Conte said, without specifying when.

“Italy will do its part and welcome some of the migrants who are onboard the Lifeline.”

However, Malta said it would only allow disembarkation if other European Union countries took their quota of migrants, adding that “4 member states have already confirmed their participation”.

The government also warned it would launch an investigation and possibly take action against the Lifeline once it entered Maltese waters.

The Lifeline NGO, meanwhile, tweeted that “we now need EU countries to welcome the people. That was what Malta asked for, and that is what we asked for.”

Italy’s far-right Interior Minister Matteo Salvini quickly hailed the news that a second migrant ship he had turned away would be taken in elsewhere. Earlier this month, Rome rejected the Aquarius ship carrying 630 migrants, forcing it to eventually dock in Spain.

“For women and children really fleeing the war the doors are open, for everyone else they are not!” he tweeted.

Salvini has repeatedly warned foreign charities to stop rescuing migrants off Libya, insisting Italian ports “are and will be closed to those who aid human traffickers”.

The decision by Italy’s new hardline government and Malta to turn away rescue vessels has plunged Europe into a political crisis over how to collectively handle the huge numbers of people fleeing war and misery in Africa, the Middle East and Asia.

He insisted there was no migrant “crisis” but urged leaders “to respond quickly to an urgent situation”.

“France is ready to send a team on site to process (asylum) requests on a case-by-case basis,” as it did for migrants aboard the Aquarius once it docked in Spain.

Italy and Malta say they are unfairly bearing the brunt of the new arrivals, while other European countries are urging more forceful policies to block their entry.

During a surprise visit to Libya on Monday, Salvini called for processing centers to be set up in various unnamed African countries to deal with potential migrants in a move “to help Libya as well as Italy block migration”.

Libya is a gateway for thousands of refugees and migrants hoping to reach Europe. Hundreds drown each year attempting the perilous crossing over the Mediterranean in often rickety boats.

Its coastguard said it had rescued nearly 1,000 people on Sunday, and Spanish authorities said they had picked up more than 600 others on Monday.

On Sunday, 16 EU leaders held emergency talks in Brussels in a bid to break a longstanding deadlock over who should take in the migrants, the bulk of whom have been landing in Italy and Greece.

A full summit is scheduled for Thursday and Friday.

The current row came to a head earlier this month over the Aquarius incident.

The war of words saw French President Emmanuel Macron accuse Rome of “irresponsibility” for turning away the boat, while Italy denounced Paris for hypocrisy in pushing migrants back across their shared border.

The issue was raised during a meeting at the Vatican Tuesday between Macron and Pope Francis, who has called for “solidarity” with migrants.

In Germany, Chancellor Angela Merkel is facing an ultimatum from her hardline interior minister who has given her until the end of June to find a European deal to curb new arrivals. – Rappler.com