Drug gangs may be behind Dutch newspaper attacks – police 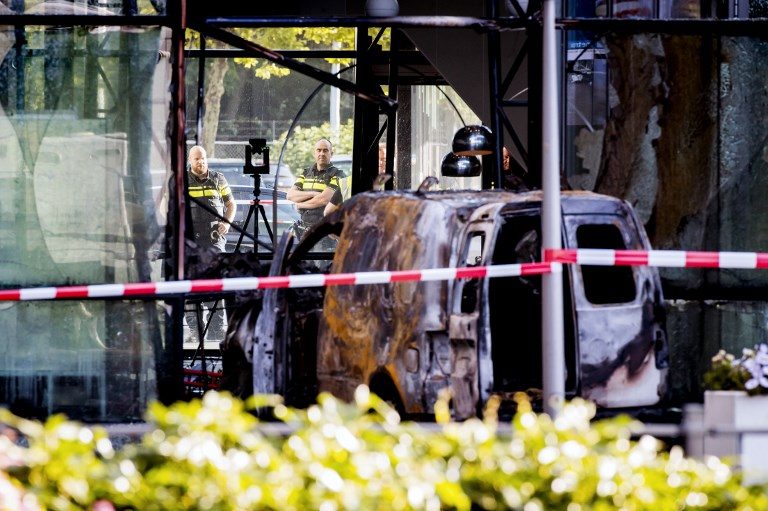 Facebook Twitter Copy URL
Copied
'We will never be silent,' declared the front-page headline of De Telegraaf, above a picture of the burnt-out Volkswagen Caddy van lodged in the charred and twisted facade

THE HAGUE, Netherlands – Dutch police on Wednesday, June 27, stepped up a probe into a van attack on one of the country’s leading newspapers, with drug-trafficking gangs possible suspects, as the daily vowed it would never be cowed.

“We are currently investigating all angles, but we are not excluding that the attack may have some connection to organized crime,” Amsterdam police spokeswoman Esther Izaks told AFP.

A white van was twice deliberately rammed into the glass-fronted facade of the head offices of popular daily tabloid De Telegraaf in Amsterdam before dawn on Tuesday.

The hoodie-wearing driver then got out, poured the contents of a jerrycan into the back of the van and set it alight, igniting a massive fireball. The driver fled in a nearby waiting car.

“We will never be silent,” declared the front-page headline of De Telegraaf on Wednesday, above a picture of the burnt-out Volkswagen Caddy van lodged in the charred and twisted facade.

It was the second attack on a Dutch media organization in less than a week after a man fired an anti-tank weapon into another building in the same Sloterdijk area of Amsterdam housing several organizations including the weekly newspaper Panorama.

Extra safety measures have now been put in place to protect other newspaper buildings around the city, including more surveillance cameras.

“We have launched an intensive investigation, but it is not possible at this stage to say how long it may last,” Izaks said.

The Telegraaf said the police have set-up a large-scale investigation team, with about 20 detectives and forensic experts assigned to the case. Some are scanning CCTV records, and they are appealing for other video footage from any passersby.

The Telegraaf, known for its focus on crime exposes, as well as sports and celebrity gossip, speculated that Amsterdam’s so-called Mocro-mafia may be behind the attacks.

Both De Telegraaf and Panorama have recently published stories about the police hunt for two wanted gang members from Utrecht, who are believed to have fled to Mexico.

“Perhaps the attacks were in reaction to these two stories,” the Telegraaf wrote.

Far from tourists’ eyes, the Dutch capital has witnessed several assassinations in recent years as rival gangs vie for control of the lucrative drug trade.

The most gruesome was in 2016 when the severed head of a known gang member was found outside a shisha lounge.

The gangs consist mainly of Dutch citizens of Moroccan or Surinamese descent.

Dutch Prime Minister Mark Rutte called the attack a “slap in the face to the free press and to Dutch democracy” and the national journalists association denounced what it called an “alarming trend”.

Dutch police said meanwhile they had found early Wednesday the burnt-out wreck of the possible getaway car, after an Audi was found on fire in a parking lot near a main highway. – Rappler.com