EU split on migration at ‘mother of all summits’

Jun 28, 2018 12:11 PM PHT
Agence France-Presse
Facebook Twitter Copy URL
Copied
EU President Donald Tusk warns on the eve of the summit that time is running out for leaders to reassure their citizens that they can control migration before authoritarian politicians win the 'high-stakes' debate 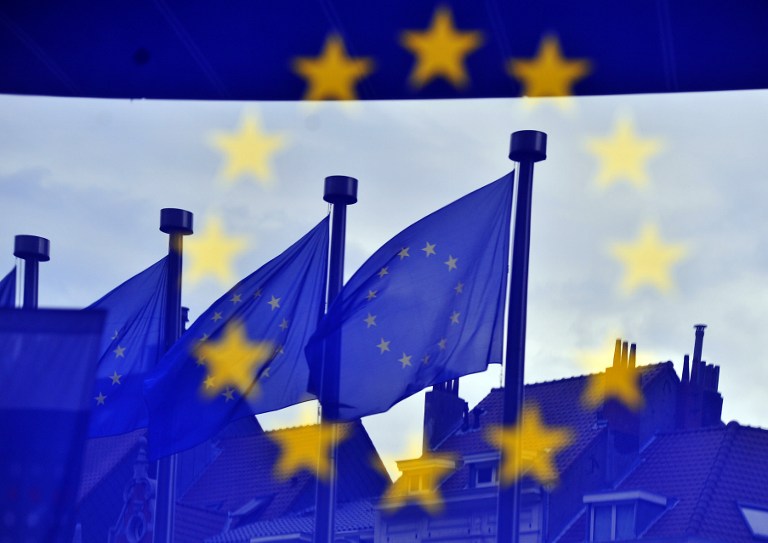 BRUSSELS, Belgium – EU leaders face deep divisions on migration and the eurozone at a crucial summit in Brussels on Thursday, June 28, that could decide the fate of embattled German Chancellor Angela Merkel and even the bloc itself.

The meeting comes amid warnings that authoritarian and “anti-European” movements will profit from any failure by the 28 leaders to deal with the wave of problems, especially a flare-up of tensions over migrants.

The rise of Italy’s new populist government and bitter rows over who should take in migrants arriving on numerous rescue boats have revived divisions, despite the fact that arrivals have dipped sharply since the 2015 migration crisis.

Eurozone reforms, pushed by French President Emmanuel Macron  to revamp the economy and counter the rise of populists in the wake of Britain’s vote to leave the EU, are meanwhile stalled in the face of opposition.

Brexit itself, which has dominated recent summits, will be relegated to the sidelines of the meeting with Prime Minister Theresa May set to give her colleagues only a brief update on the deadlocked negotiations.

EU President Donald Tusk warned on the eve of the summit that time is running out for leaders to reassure their citizens that they can control migration before authoritarian politicians win the “high-stakes” debate.

“More and more people are starting to believe that only strong-handed authority, anti-European and anti-liberal in spirit, with a tendency towards overt authoritarianism, is capable of stopping the wave of illegal migration,” Tusk, the summit host, said in a letter to leaders.

“The stakes are very high and time is short,” he warned.

European Parliament President Antonio Tajani warned separately in Britain’s The Guardian newspaper that failure to act on migration “could deal a fatal blow to the European project”.

One senior EU official dubbed it the “mother of all summits” because of the huge number of key issues that leaders are under pressure to resolve at the two-day meeting on Thursday and Friday, June 29.

Merkel, for years Europe’s most powerful leader, now risks seeing her fragile coalition collapse if she cannot reach migrant deals with other countries including Italy’s new government of far-right and anti-establishment parties.

After allowing more than one million asylum seekers into Germany since 2015, Merkel faces an end-of-the-month deadline from her own interior minister to seal pacts that would let Germany turn back asylum seekers already registered in other EU states.

The EU is rapidly moving rightwards on migration, a stance that is likely to increase when Austria under youthful conservative Prime Minister Sebastian Kurz assumes the bloc’s presidency on July 1.

A “mini-summit” of 16 leaders in Brussels on Sunday, June 24, failed to make much headway.

The leaders hope at the summit to approve work on migrant “disembarkation platforms” in countries outside Europe, most likely in Africa, although EU officials have been vague on what form they would take.

In a bone to Merkel the leaders will also agree to “closely cooperate” on stopping secondary movements of migrants, according to draft summit conclusions, although the language may be weaker than she would have hoped.

But there is no chance of agreement on a plan for mandatory “burden sharing” by moving refugees from frontline Mediterranean states like Italy and Greece to other countries.

The plan is strongly opposed by eastern European countries, particularly the authoritarian governments of Hungary and Poland.

The leaders will on Friday discuss largely French and German proposals, many watered down, to reform the euro in an effort to avert the repeat of the debt crisis and to rebuild confidence in the single currency.

Notably absent is any overt support for Macron’s plans for a eurozone budget, given the bitter opposition of the Netherlands and others.

On Brexit, EU leaders are expected on Friday to deplore a lack of progress and say talks, which have stalled on the issue of the Irish border, must be stepped up with a view to reaching a deal by October.

Leaders would “appreciate” if May gives them more details on Thursday as to the “intentions of the British government”, particularly on relations after Britain leaves in 2019, a senior EU official said. – Rappler.com