Jun 29, 2018 11:44 PM PHT
Agence France-Presse
Facebook Twitter Copy URL
Copied
The harrowing around-the-clock search is hampered by torrential rains and fast-flowing flood waters that have cut off rescuers from where the boys are believed to be stuck 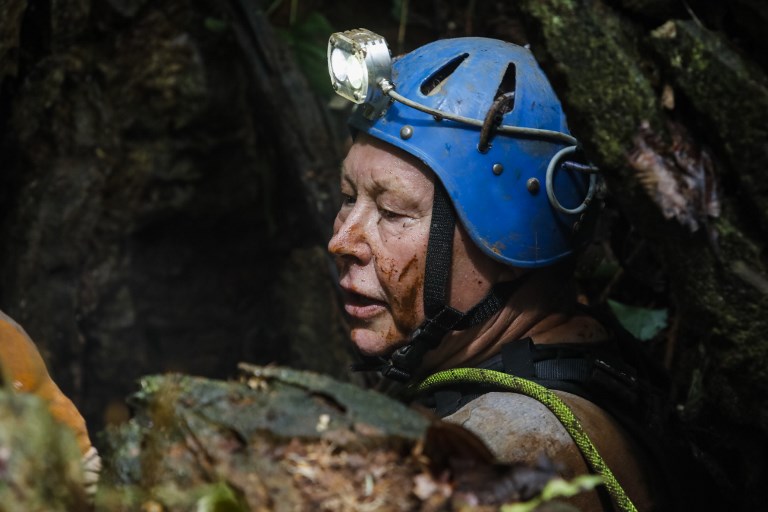 MAE SAI, Thailand – A newly-discovered opening to a flooded Thai cave where 12 children and their football coach have been stuck for six days raised hopes for the massive rescue operation for survivors on Friday, June 29.

The harrowing around-the-clock search for the boys has been hampered by torrential rains and fast-flowing flood waters that have cut off rescuers from where the boys are believed to be stuck.

Crying relatives have camped out at the site with chanting monks for nearly a week since the team and their 25-year-old coach went missing, desperately waiting for news.

On Friday, a rescue team entered a 40-meter-long chimney near the center of the cave that led to a muddy chamber beneath, according to the governor of Chiang Rai province.

But it was not clear whether the air pocket connected to the massive Tham Luang cave where the youngster footballers are trapped.

“We cannot say exactly what we found but if we’re lucky, we might have good news… but it could be a deadend as well,” governor Narongsak Osottanakorn said.

“If they get it, they can eat the snacks and mark their spot on the map and try to float it back to the entrance,” National Police Chief General Chaktip Chaijinda said.

Teams scoured the mountain for other possible openings while drones and thermal imaging technology were dispatched to find a spot where a drill could bore a hole to the inside.

It was a race against time as the huge operation – involving more than 1,000 divers, police, soldiers, border guards and even sniffer dogs – neared the one week mark.

US military personnel and three British diving experts at the site were to be joined by Chinese cave divers later Friday.

Families refused to give up hope as a nation galvanized with messages of support and prayers for the young football team, aged between 11 and 16.

“The monk led a meditation and prayer sessions, which helped me to relax,” Thinnakorn Boonpiem, the father of one of the missing boys, told AFP.

“His survival is up to the merits and karma of my son,” he said, looking exhausted.

Relatives laid offerings and a monk chanted nearby as night fell at the site on Monday at the bustling entrance of the cave teeming with medics, rescuers and reporters.

At 10 kilometers long, Tham Luang cave near the Laos and Myanmar borders is one of Thailand’s longest.

It is also one of the most difficult to navigate because of its narrow passageways and winding series of tunnels.

A sign at the entrance warns visitors not to enter the cave during the rainy season between July and November, when the risk of flooding runs high.

Divers resumed their underwater search after they were halted because of dangerous fast-running floods on Friday.

Water levels drained slightly thanks to dozens of pumps but stubborn rains kept several chambers near the cave’s opening submerged.

A lack of light and murky waters that some experts compared to swimming through cold coffee further complicated efforts.

Attention turned to what state the boys might be in almost a week after they first entered the cave following a football practice last weekend.

Though the water was fresh, and in theory drinkable, much of it is runoff from nearby farms and could carry high levels of bacteria, chemicals and even animal waste.

The boys could be facing a risk of illness and dehydration and may have run out of food and light if they had torches on hand.

But officials said the team know the cave well and have visited previously, buoying hopes for their survival.

“Boys in a cave who have their wits about them and know the area – I think there’s a good chance they have significant time,” he said from Chiang Mai.

Messages of solidarity and hope poured in from schools, football clubs, mosques and temples across Thailand on Friday.

Twitter called for the boys to “Please come home” and “Don’t give up”. Another said: “Stay strong and be patient, boys, help is on the way,” one user wrote.

“I regard them as my own children too,” he told families before having lunch with them and leading a meditation with the group. – Rappler.com