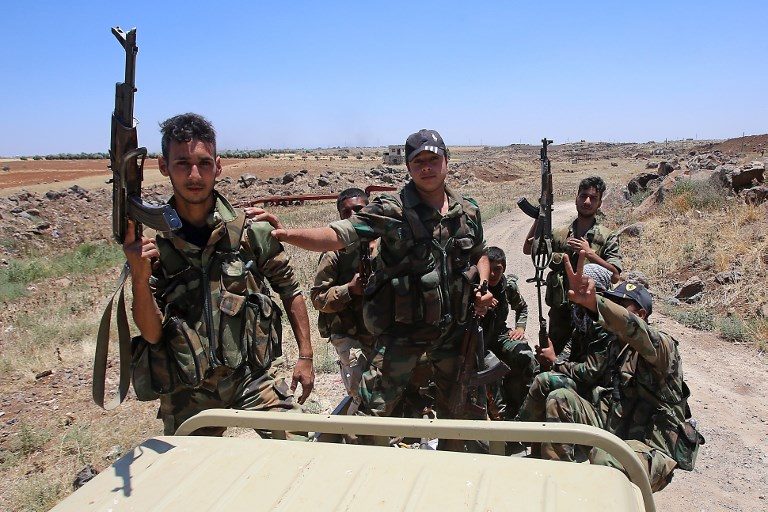 Since June 19, the Damascus regime has pressed a deadly bombardment campaign in southern Syria in a bid to retake the strategic area bordering Jordan and the Israeli-occupied Golan Heights.

The agreements for the 8 towns were reached even as regime air strikes on Saturday pounded other opposition holdouts in the wider southern province of Daraa, the Syrian Observatory for Human Rights monitor said.

With the latest deals brokered by regime ally Russia, government forces now control more than half of the province, up from just 30 percent at the start of the escalation, it said.

“At least 8 towns in the northern and eastern Daraa countryside agreed to ‘reconciliation’ deals after talks in each town between Russian generals as well as local notables and remaining rebels,” Observatory head Rami Abdel Rahman said.

The deals are the latest in a string of such “reconciliation” agreements across the country that have seen the government retake opposition-held areas, often after deadly air and ground offensives.

These deals imposed by the regime often see opposition fighters hand over their heavy weapons and allow those who want to leave to board buses headed to rebel-held areas in the north of Syria.

They had come under regime control “after fighters handed over their weapons to the army in preparation for settling their status” with the regime, SANA said. (READ: UN chief appeals for end to fighting in south Syria)

State television broadcast live images from Dael of residents holding up posters of President Bashar al-Assad in front of the camera, and chanting slogans in support of the army.

With the “reconciliation” deals in Daraa, the regime has further chipped away at a U-shaped patch of territory controlled by the rebels in southern Syria.

Retaking the whole of Daraa province would be a symbolic victory for the regime, as it is seen as the cradle of the anti-Assad uprising seven years ago that spiralled into civil war.

It would also allow the regime to reopen the Naseeb border crossing with neighboring Jordan and resume lucrative trade across the frontier.

But half of the province – including part of the provincial capital Daraa city – still remains in the hands of rebels not willing to give up the fight.

“The regime wants us to hand over everything  Daraa city, the Naseeb crossing, ourselves and the heavy weapons. It’s inadmissible,” a negotiator in the rebel-held part of Daraa city told Agence France-Presse.

In the last town, a community leader was killed along with 5 members of his family on Friday, June 29 in obscure circumstances likely linked to the “reconciliation” talks, the monitor’s Abdel Rahman said.

Regime and Russian strikes on other parts of Daraa on Saturday killed at least 5 civilians, the Observatory said.

That brought the total number of civilians killed in regime bombardment on the province to 105 including 19 children since June 19.

In that same period, 96 pro-regime fighters and at least 59 rebels have lost their lives.

More than 350,000 people have been killed in Syria since the war started in 2011 with the brutal repression of anti-government protests. – Rappler.com