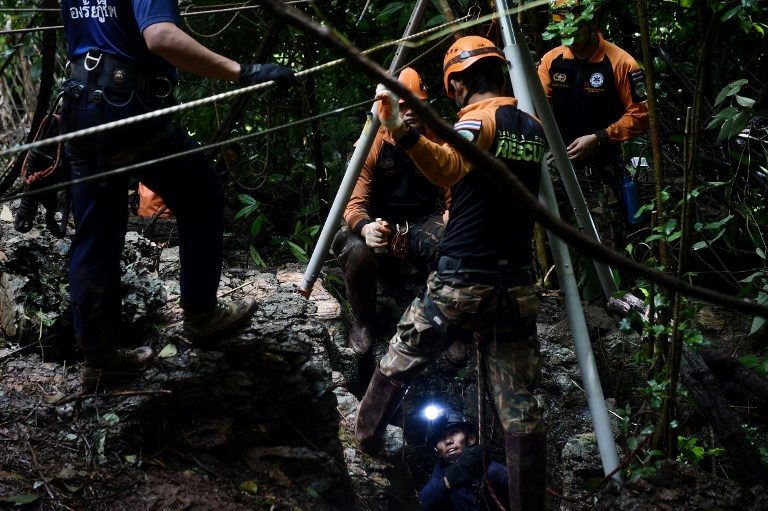 MAE SAI, Thailand (UPDATED) – Rescue divers inched closer to a spot in a flooded cave where 12 boys and their football coach have been missing for more than a week after days of bad weather beset the grueling search.

The children, aged 11 to 16, and their 25-year-old assistant coach have not been heard from since they ventured into the recesses of the Tham Luang cave in northern Thailand on Saturday, June 30, and were blocked by heavy rains.

But the clouds parted on Sunday, July 1, and with the help of water pumps divers were able to established a forward operating base inside the twisting chambers, raising hopes that the “Boars”, as the team is known, could be located soon.

“Today is a bright day for me and our team. We have sunlight today, roads are easily walkable,” Narongsak Osottanakorne, governor of Chiang Rai province, told reporters on Sunday afternoon.

He said water levels in the cave had decreased and that almost 60 foreign and Thai divers were involved in the rescue effort.

“Today what we have to do is to rush to the kids,” Thai Navy Seal commander and Rear Admiral Apakorn Yookongkaew said earlier at the site. “We will not stop until we find them.”

Responders are placing extra oxygen tanks, strong ropes and LED lights along the cave’s walls in hopes they can provide a path to an airy chamber called Pattaya Beach where officials believe the 13 are taking refuge because of its elevation.

Rescuers have advanced 600 metres from the base towards the Pattaya site, while heavy drilling at separate chimneys outside the cave has started in an attempt to establish communication with the boys.

The upbeat attitude comes after a week of heavy rains pounded the area near the Myanmar and Laos borders, making it difficult to reach deeper into Tham Luang.

“The rain has stopped and rescue teams have found potential ways to reroute the waterway”, diverting its flow so no more enters the cave, he said. “The families are feeling much better too.”

Buddhist monks from all over Chiang Rai gathered at a local school to pray for the football squad.

Teams of foreign experts from Australia, England, Japan and China, including more than 30 US military personnel, have descended on the remote mountainous site to join some 1,000 Thai rescuers.

The field where the Boars used to practice is now a helipad used to lift up heavy machinery.

“Every single day the conditions are changing,” Jessica Tait, a spokeswoman for the US troops, told Agence France-Presse. “With the improvement with the weather, hopefully some other areas and some of the efforts are becoming easier.”

Large pumps were installed in a nearby village to drain water from the area.

At 10 kilometres (6 miles), Tham Luang is one of Thailand’s longest and toughest caves to navigate, but drilling experts hope its limestone formations could make a series of holes and alternative entrances explorable by camera.

“We still expect some difficulties, because we have to drill not vertical, but inclined,” Suthisak Soralump, a geotechnical engineer leading up the effort, told AFP. “But anyway we put our best team in Thailand to come. So let us try.”

Officials said the boys know the site well and have visited many times, so they may have been able to find shelter.

Rescuers discovered footprints and handprints in a chamber earlier in the week, farther in from where they recovered the kids’ football boots, backpacks and bicycles.

Relatives and friends have held vigils and prayed for their safe return.

“I miss them,” said 15-year-old Thananchai Saengtan, a friend of one of the boys. “I want them to come back so we can play football together again.” – Rappler.com