3 dead in Nicaragua clashes as U.S. slaps sanctions on gov’t 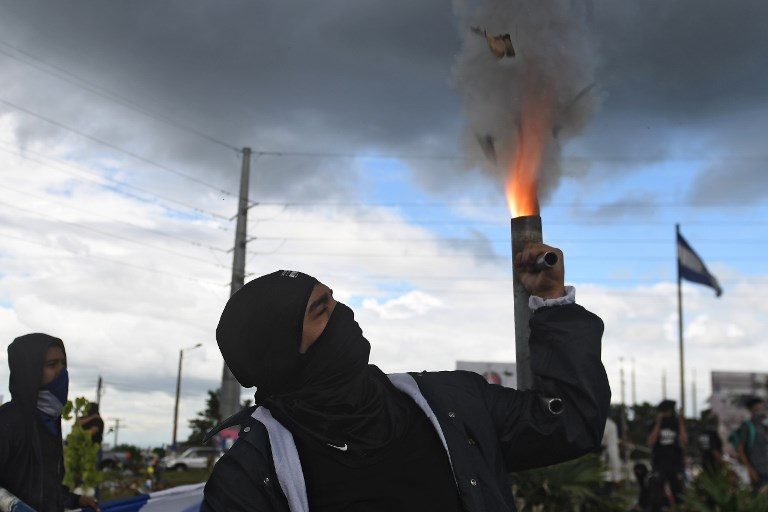 LEÓN, Nicaragua – Three people were killed in fresh clashes in Nicaragua on Thursday, July 5, as the US sanctioned the Central American country’s police chief and two other top officials over rights abuses and corruption.

The deaths occurred in renewed violence in the country’s northwest, where security forces loyal to President Daniel Ortega fought with anti-government activists in a bid to quash the popular uprising against the embattled leader.

More than 220 people have been killed in the ongoing unrest since mid-April.

Earlier on Thursday, around 20 truckloads of riot police and paramilitaries moved into the indigenous Sutiaba area of Leon to clear roads blocked by barricades.

“They attacked to remove the barricades that the protesters had built, there is still a police presence in Sutiaba, the population is very fearful, in their homes. There are policemen with weapons,” Roman Catholic priest Victor Morales told Agence France-Presse (AFP).

“There is a lot of tension and we have confirmed we have at least 3 dead.”

The priest said Nunez and Vazquez had fled a barricade and “had taken refuge in a house” when police entered and shot them.

“We have until now 22 injured and 14 detained, including journalists from the opposition radio Dario, and a 12-year-old boy who was taken out of his home,” opposition spokesman Bryon Estrada told AFP.

“The violence and repression seen in Nicaragua since demonstrations began in April are products of the systematic erosion of human rights over the years, and highlight the overall fragility of institutions and the rule of law,” Zeid said.

“I call on the government to cease State violence and to dismantle the pro-government armed elements that have been increasingly responsible for repression and attacks.”

Roman Catholic bishops are working to mediate national dialogue talks between the government and opposition in a bid to end the protests and government repression that have wracked the country since April 18.

The 72-year-old president has remained silent on a proposal by the influential Catholic hierarchy to bring forward elections scheduled for 2021 to March of next year.

The mediation committee said later on Thursday they would convene a new round of talks on Monday, July 9, at 10:00 am.

The US has cranked up its own pressure on Ortega to make progress in the struggling peace negotiations.

The US Treasury put National Police Commissioner Francisco Javier Diaz Madriz and Fidel Antonio Moreno Briones, secretary of the Managua mayor’s office, on its financial blacklist, citing their roles in killings and beatings of anti-government protesters.

Also sanctioned was Jose Francisco Lopez Centeno, an oil executive the US Treasury alleged had siphoned off millions of dollars from two government-linked companies for his own benefit and that of Nicaragua’s leaders.

“The violence perpetrated by” Ortega’s government and its allies “to illicitly enrich themselves is deeply disturbing and completely unacceptable,” said Sigal Mandelker, Treasury Under Secretary for Terrorism and Financial Intelligence.

“President Ortega and his inner circle continue to violate basic freedoms of innocent civilians while ignoring the Nicaraguan people’s calls for the democratic reforms they demand, including free, fair, and transparent elections.”

The sanctions order cites Diaz’s role in directing the police, who allegedly took part in the killing of 6 people including two children last month by setting fire to their Managua home.

Moreno, it said, has acted as the leader of the Sandinista Youth, a pro-government group that allegedly also took part in that attack and has been involved in inflicting violence on activists.

Lopez is a top executive of two related oil-importing institutions – Venezuela-controlled Albanisa and Nicaragua’s Petronic – giving him access to substantial funds he has used for his personal needs and those of political leaders. – Rappler.com