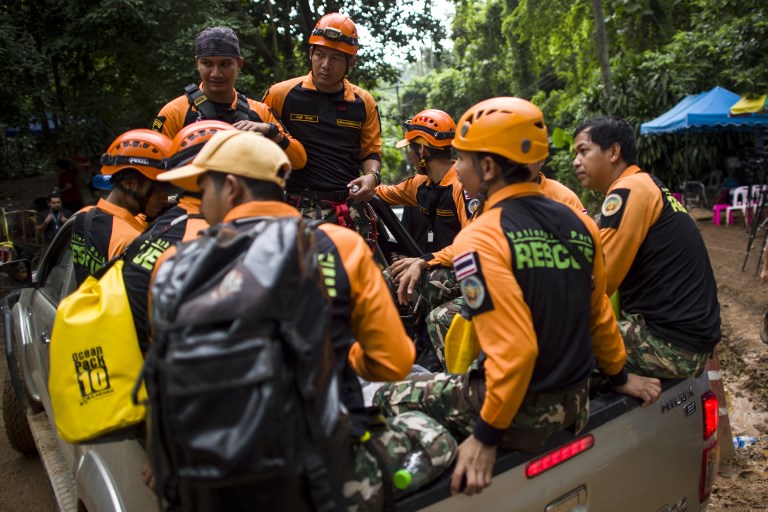 MAE SAI, Thailand – The 25-year-old coach of a youth football team trapped for two weeks in a Thai cave has offered his “apologies to the parents” of the boys in a scrawled note released by the Thai Navy on Saturday, July 7.

Thailand is holding its breath for the safe return of the group, with heavy rains forecast and fears mounting over the reduced oxygen and high level of water in the cave.

Ekkapol Chantawong was for 9 days the only adult with the children – aged 11 to 16 – until they were discovered on a muddy ledge by rescue divers on Monday.

“To all the parents, all the kids are still fine. I promise to take the very best care of the kids,” he said in a note given to a diver on Friday and published on the Thai Navy SEAL Facebook page on Saturday.

“Thank you for all the moral support and I apologize to the parents.”

Other touching notes signed by members of the “Wild Boar” team were directed to their families, many of whom have kept an anxious vigil outside the cave for a fortnight.

“Don’t worry dad and mum,” said a note from one of the boys who gave his nickname as “Bew”.

“I have been away for two weeks but will come back and help you sell your stuff.” His family are shopkeepers.

Another note, from “Dom” said he was “fine but the weather here is a little cold”.

The boys are being trained in the basics of diving in case the flood waters force authorities into a sudden evacuation through twisting and jagged passageways.

But late Friday the authorities said they are not ready to dive out. (READ: Thai military diver dies as window for cave rescue narrows)

Ekkapol’s message is the first from the coach, whose role in the team’s predicament has split Thai social media.

Many have lauding him after reports he gave his share of food to the kids before they were located and helped them get through 9 days in the darkness.

Others have criticized him for agreeing to take the young boys into the cave during the monsoon season.

The group entered the cave on June 23 and got trapped as floodwaters tore in.

A massive rescue operation is underway, with high-powered pumps working round-the-clock to reduce the water level inside the cave, while rescue experts weigh their options to extract the kids. – Rappler.com