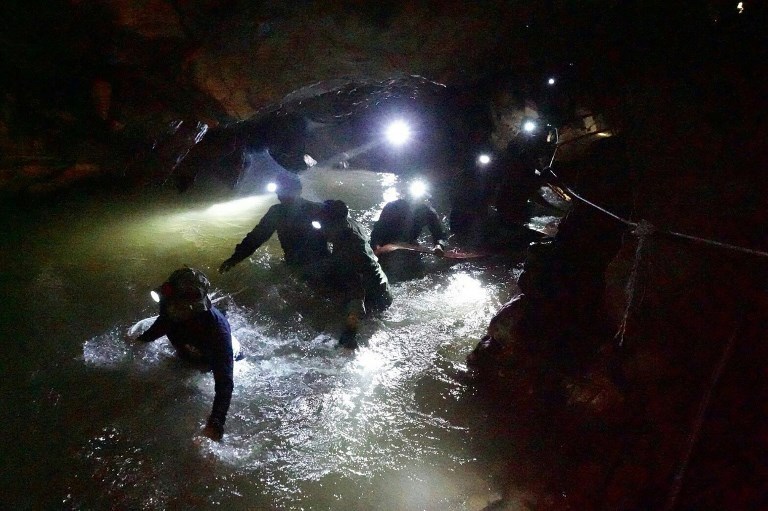 The complex operation, which began on Monday, July 9, after several days of meticulous planning, is likely to resume Tuesday, July 10.

That leaves 5 of the 13 to spend another night inside the cave.

With fresh monsoon rains due, rescuers have warned the window of opportunity to evacuate the boys is “limited”.

Here is a timeline of the efforts to find and free the group.

The youngsters, aged between 11 and 16, and their 25-year-old coach enter the Tham Luang cave in northern Thailand during heavy rains after football practice.

They are reported missing by the mother of one of the boys after her son does not come home that night.

Local officials find bicycles locked to a fence and shoes and football boots close to the entrance.

Park officials and police find handprints and footprints believed to belong to the boys. Relatives start to keep vigil outside the cave. 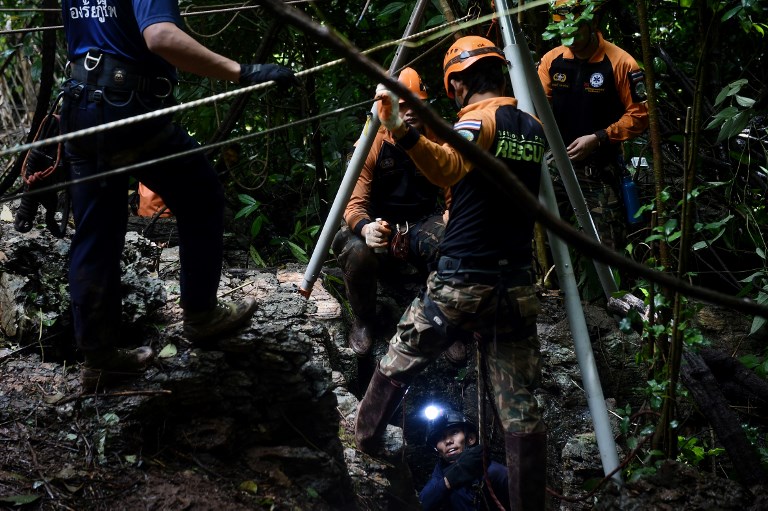 Thai Navy SEAL divers enter the cave searching for the boys. Makeshift shrines are set up for parents to pray and make offerings as heavy rains continue.

Divers reach a T-junction several kilometers inside the cave but are forced back by rushing floodwaters that clog a narrow crevice near an air pocket called “Pattaya Beach”, where the boys are believed to have retreated.

A team of more than 30 American military personnel from the US Pacific Command arrive.

They are joined by 3 British diving experts who enter the cave but quickly retreat in the face of heavy flooding.

The underwater rescue is temporarily halted after downpours create fast-moving floods inside the cave.

Water pumps are shipped in to drain the rising, murky floodwaters and drones are dispatched to help find new vents in the cave roof.

Thailand’s junta leader Prayut Chan-O-Cha visits the site, jokes and cooks with relatives, asking them not to give up hope. (READ: Hope as divers find possible opening to rescue Thai children)

A break in the rain allows divers to reach further inside the cave but they are still a long distance from where the boys are believed to be.

Divers inch further into the cave, as an operating base is set up inside and hundreds of air tanks and other supplies are pulleyed in. (READ: Classmates yearn for safe return of Thai boys trapped in cave) 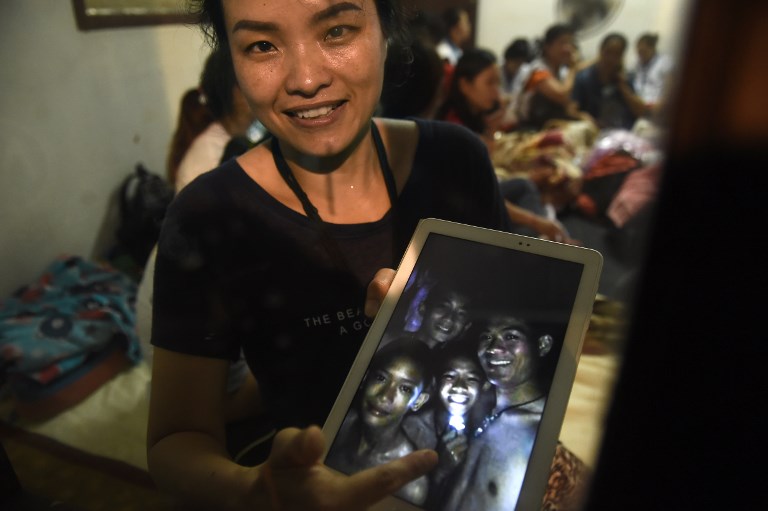 Finally, a miracle: the 12 boys and their coach are found alive late Monday evening about 400 meters beyond Pattaya Beach by the British cave diving team.

Crowds at the teeming rescue site cheer the good news, but attention soon turns to the difficult task of getting the boys out safely.

Much-needed food and medical supplies – including high-calorie gels and paracetamol – reach the boys as rescuers prepare for the possibility that they may remain in the cave for some time.

Officials say the group are being taught how to use diving masks and breathing apparatus. Teams pump out water around the clock as more rain is forecast for the days ahead. (READ: Fresh navy video shows Thai cave boys in ‘good health’)

In a sign of increased urgency, authorities say expected rains may force a complex rescue quicker than first thought. A team of bird’s nest collectors scour the mountainside in search of new openings into the cave roof.

Tragedy strikes: a diver helping to establish an air line to the boys dies after passing out while returning from the chamber.

Saman Kunan’s death raises serious doubts over the safety of attempting a rescue through the cave’s waterlogged passageways.

Thailand’s Navy SEAL commander says oxygen levels inside have dropped. He warns the window of opportunity to free the youngsters is “limited”.

Rescue operations chief Narongsak Osottanakorn says the boys are not ready to dive to safety.

A scrawled message emerges from the team’s coach, offering his “apologies” to their parents, while in other touching notes the boys tell their relatives not to worry.

Divers lead 4 of the boys out of the cave as night falls, sending them to the hospital. Narongsak says they are “safe” but no other details are given about their conditions.

Narongsak says late in the evening that the rescue mission will not start again for at least another 10 hours to give time for oxygen and other supplies to be replenished.

Authorities keep the public guessing over the identities of those rescued so far. As dusk falls 4 more of the team have been rescued. The Thai Navy SEALs greet another seemingly successful day with a social media post saying “Hooyah”. – Rappler.com