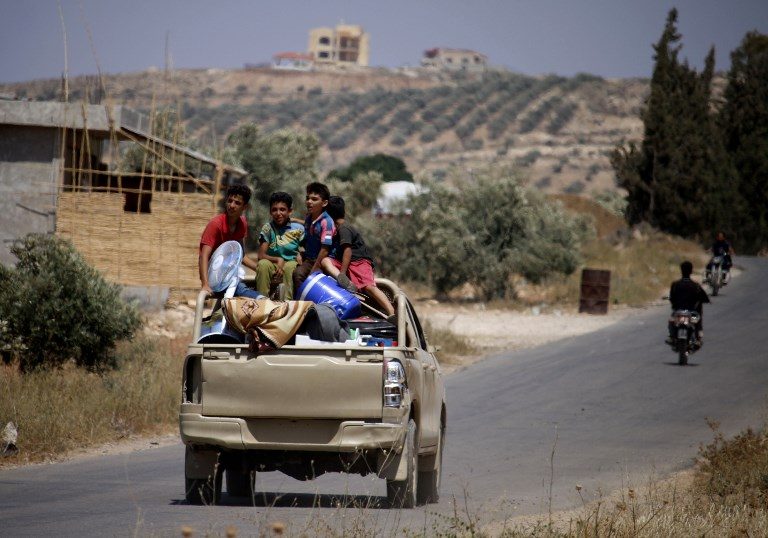 Facebook Twitter Copy URL
Copied
Calm reigns over the region on Saturday as the two sides finalized the ceasefire deal, according to the Syrian Observatory for Human Rights

DARAA, Syria – Thousands of displaced Syrians were heading home Saturday, July 7 after rebels and the government reached a ceasefire deal in the south following more than two weeks of deadly bombardment.

Under the agreement announced Friday, July 6 after talks between rebels and regime ally Moscow, opposition fighters will hand over territory in the southern province of Daraa near the Jordanian border.

Daraa is seen as the cradle of the uprising that sparked Syria’s 7-year war, and the government retaking full control of it would be a symbolic victory for President Bashar al-Assad.

A Russia-backed regime offensive in Daraa has displaced more than 320,000 people since June 19, the United Nations says, including tens of thousands who fled south to the sealed border with Jordan.

Calm reigned over the region on Saturday as the two sides finalized the ceasefire deal, according to the Syrian Observatory for Human Rights, a Britain-based monitoring group.

“People have started to return to their homes since yesterday” from the Jordanian border, Observatory chief Rami Abdel Rahman said.

“More than 20,000 people have set off for home so far, heading to areas for which an accord has been reached in the southeastern Daraa countryside,” he said.

But others “are scared to return to regime-controlled areas, fearing their children will be arrested,” Abdel Rahman said. (READ: Pope fears for Christian presence in Middle East)

More than 150 civilians have been killed in the regime bombing campaign on Daraa since June 19, the Observatory says, and trust in the government does not run high.

Osama al-Homsi, 26, said he was hesitant to return to his hometown of Jeeza in southeastern Daraa after the deal.

“Of course I support the agreement to stop the fighting and bloodshed,” said the young man, who sought shelter from the bombardment in a field to the south of Daraa city.

“But what is frightening is that it comes with no UN guarantees… The Russian and the Syrian regime offer no safety,” he said.

Only when it is clear the ceasefire has really been implemented and “if we are guaranteed that no one will pursue us, will we want to return,” Homsi said.

Friday’s accord follows a string of similar deals with rebels for other areas of Syria, which have seen the regime retake more than 60 percent of the country, according to the Observatory.

It caps a series of government victories nationwide since Russia intervened in 2015 on Assad’s side, including for the former rebel bastion of Eastern Ghouta outside Damascus earlier this year.

Under the accord, rebels are expected to hand over their heavy weapons, while those who reject the agreement will be bused with their families to opposition-held areas in the north of the country, state media has said.

An Islamic State jihadist group affiliate, which holds a small pocket in the southwest of Daraa, is excluded from the deal.

Government forces will also take over “all observation posts along the Syrian-Jordanian border”, state media said on Friday, hours after the regime regained control of the vital Nassib border crossing with Jordan.

On Saturday, an Agence France-Presse correspondent saw Syrian army forces and Russian military police deployed at the crossing after more than 3 years under opposition control.

One of the arches of the key frontier post was damaged, mangled metal wires sprouting from the concrete structure.

The agreement is expected to be implemented in three stages, rebel spokesman Hussein Abazeed said, first for eastern Daraa, the provincial capital and then the west of the province.

“Assad got what he wanted from the deal,” analyst Nick Heras said. (TIMELINE: The Syria unrest)

He obtained “control over the Syrian-Jordanian border areas in Daraa, the gradual disarmament of the rebels’ heavier weapons, and the opportunity to rebuild his government’s influence in southern Syria,” the analyst at the Washington-based Center for a New American Security said.

Daraa lies in a wider southern region that Assad aims to retake, including the neighboring province of Quneitra to the west, which borders the Israeli-occupied Golan Heights.

But “taking Quneitra will be complicated”, said Sam Heller, an analyst at International Crisis Group (ICG).

“The government will have to figure out how to advance without agitating the Israelis and triggering destructive Israeli military action,” he added.

The ICG said in a recent report that Israel had supported fighters in southern Syria since 2013 or 2014, apparently to “secure a buffer zone on its border”.

More than 350,000 people have been killed and millions displaced since Syria’s war started in 2011 with a brutal crackdown on anti-government protests. – Rappler.com