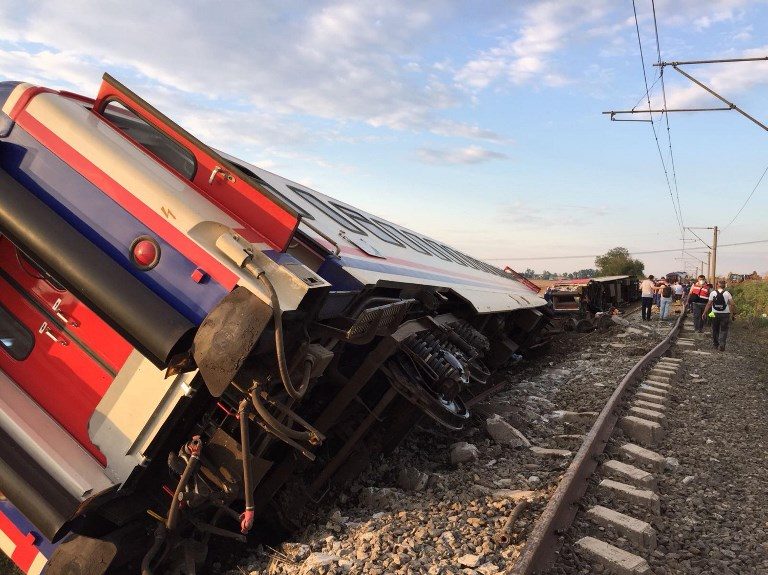 The train, with over 360 people on board, was travelling from the Edirne region on the Greek and Bulgarian borders to Istanbul’s Halkali station on Sunday, July 8, when 6 carriages derailed in the Tekirdag region.

The transport ministry said that the train, carrying 362 passengers, had derailed as recent heavy downpours caused the ground beneath the track to erode away.

Transport Minister Ahmet Arslan said that the latest checks on the rails had been made in April, Anadolu reported.

Turkish media, including the Hurriyet daily, published pictures showing the erosion had been so bad that part of the track had been in the air with no ground left to support it.

Television pictures showed several train carriages sprawled on their sides, and shocked injured passengers being taken away on stretchers as rescue workers picked through the wreckage.

The train derailed outside the village of Sarilar in the Corlu district of Tekirdag.

President Recep Tayyip Erdogan expressed his condolences over those who lost their lives in the accident that he said has “deeply upset the whole nation”.

The accident, one of Turkey’s worst train disasters of recent years, threatens to cast a shadow over a lavish ceremony scheduled in Ankara later Monday to mark the inauguration of Erdogan for a new presidential mandate and the transition to a new system of government.

Erdogan said all state institutions were “using every means available to help”, vowing that there would be a comprehensive investigation into the “tragic accident”, the presidency said.

Turkey’s audiovisual authority RTUK later said the government had issued a temporary ban on broadcasting images from the scene. This was lifted on Monday morning.

Turkish passengers have in general preferred taking planes or buses for inter-city travel but this has been changing with the new high-speed lines.

The train involved in the accident appeared to be one of the slower passenger trains travelling on a single track line.

Turkey’s rail network has been hit by several fatal accidents in recent years.

In January 2008, nine people were killed when a train derailed in the Kutahya region south of Istanbul due to faulty tracks.

And in Turkey’s worst recent rail disaster, 41 people were killed and 80 injured in July 2004 when a high-speed train derailed in the northwestern province of Sakarya. – Rappler.com