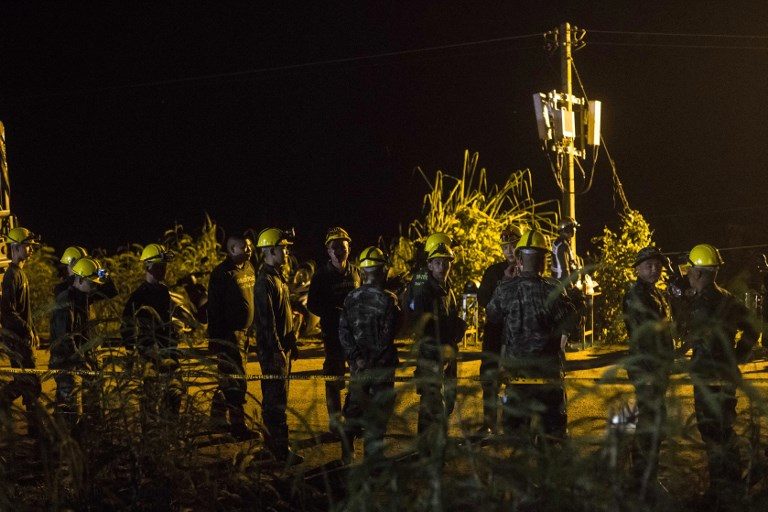 Facebook Twitter Copy URL
Copied
(UPDATED) 'Hooyah,' the Thai Navy SEALs say in a Facebook post as they announce a total of 8 members of the 'Wild Boars' football team have been rescued on July 8 and 9

“Hooyah,” the Thai Navy SEALs, who have played a crucial role in the against-the-odds operation, said in a Facebook post as they announced that a total of 8 members of the “Wild Boars” football team had been rescued on Sunday, July 8 and Monday.

Thais have been fixated on the crisis, hoping desperately for the safe return of the 12 boys and their 25-year-old football coach, after they ventured into the Tham Luang cave complex after practice and became trapped by rising waters more than a fortnight ago.

The extraction of the 4 on Monday followed a similar pattern to the previous day, with the youngsters emerging in quick succession just before nightfall after navigating a treacherous escape route of more than 4 kilometers (2.5 miles) that included extremely narrow and flooded tunnels.

Although the rescued 8 were all presumed to be the boys, aged between 11 and 16, authorities did not reveal their identities nor confirm whether the coach remained inside the cave. (READ: TIMELINE: Thai cave rescue)

Asked if the remaining 5 would be shuttled out together, rescue operations chief Narongsak Osottanakorn said it was up to the divers whose meticulous plans, including stashing extra oxygen tanks along the route, are “set for 4 people, if we bring 5 we have to change the plan.”

In a late-night press conference he also delivered a message from Thai premier Prayut Chan-O-Cha, a gruff former general.

“The Prime Minister wants this to be a lesson, this should not happen again in Thailand,” Narongsak said.

The saga has dominated global headlines, with the team spending 9 days unaccounted for inside the cave, before British divers found them – emaciated and disheveled – huddling on a muddy bank above the flooding.

Authorities then struggled to determine the best way to save the “Wild Boars,” with the group stuck on a shelf above the floodwaters in pitch darkness.

Among the ideas were drilling an escape route through the mountain, or leaving them for months until the monsoon season ended and the flooding subsided.

But with oxygen levels inside dropping to dangerous lows and the prospect of heavy rains flooding the area completely, authorities decided they had to move quickly and take the group out through the water-filled tunnels.

Narongsak described Sunday’s initial rescue bid as “D-Day” when it was launched, and there were fears that any one of many potential pitfalls could prove deadly.

Among these were that none of the boys had scuba diving experience, and that they could easily panic while swimming underwater across twisted passageways in darkness.

Dozens of foreign divers and other experts from around the world were brought in to help the rescue effort, working alongside the Thai Navy SEALs.

But the death of a former Thai Navy SEAL diver who ran out of oxygen in the cave on Friday, July 6, underscored the danger of the journey.

The first successes on Sunday offered hope of a fairytale ending to the ordeal.

Rescue chief Narongsak on Sunday described their journey out, escorted by the elite divers, as “smooth.”

Crucially, round-the-clock pumping to ease some of the flooding paid off and threatened heavy rains did not arrive.

That led an upbeat Narongsak to promise more “good news” on Monday afternoon that materialized a few hours later with the emergence of the other 4.

But although the 8 were rescued, there were concerns they may have contracted an illness while in the cave.

Narongsak said after the first 4 boys were rescued that they would be quarantined “for a while because we are concerned about infections.”

And rain could still reemerge as a threat for the remaining 5, particularly if there are complications that could delay the extraction further.

Authorities have repeatedly said the rain could re-flood crucial parts of the cave complex that have been drained and make the escape route much harder or even impossible to navigate.

Weather forecasters warned heavy rain could hit the area through the week.

Premier Prayut visited the rescue base on Monday night to deliver his congratulations to all those involved, but also to offer a note of caution.

“Everyone should be proud. (But) the mission is not over yet,” Prayut said. – Rappler.com